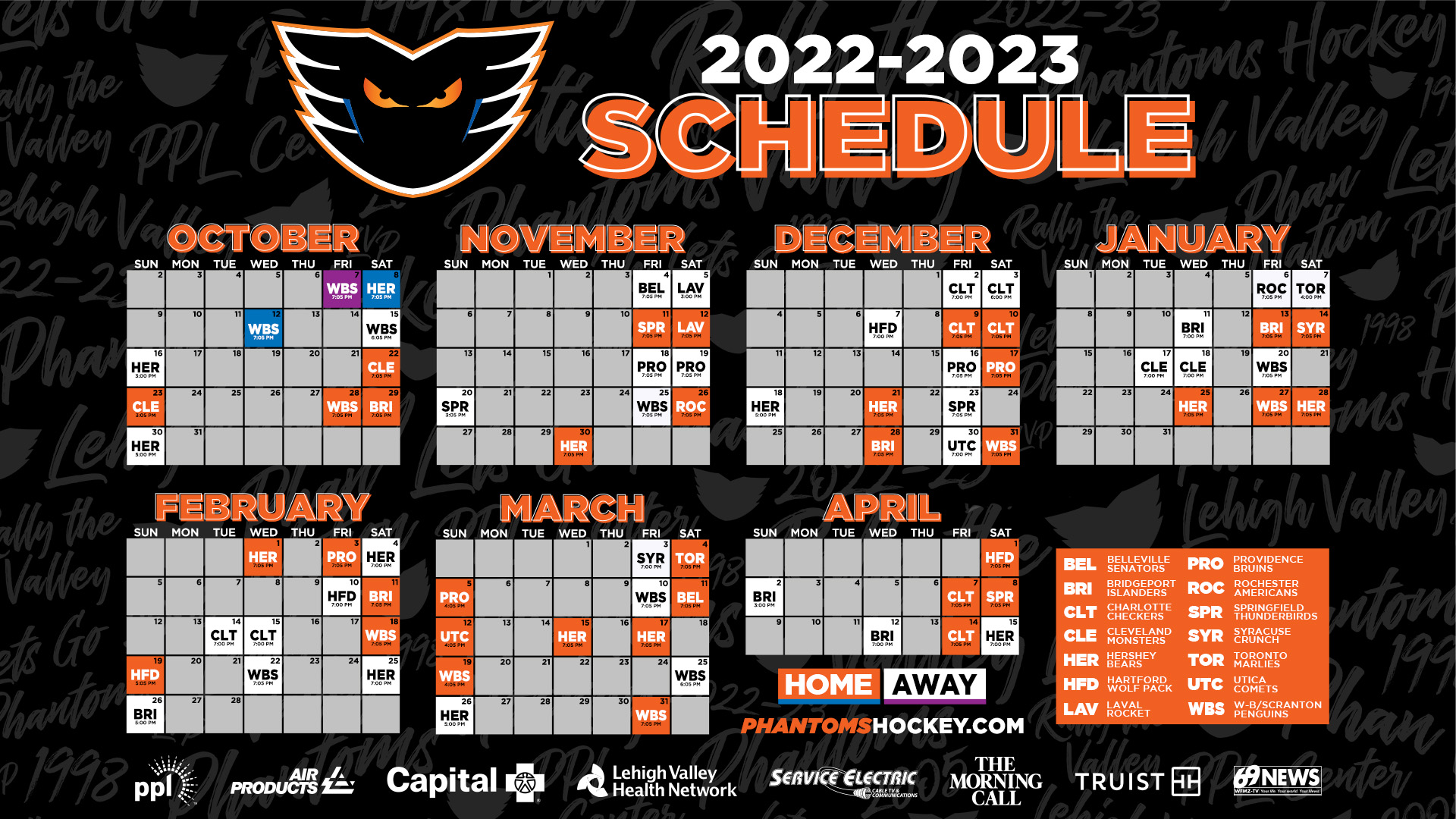 Lehigh Valley, PA – The Lehigh Valley Phantoms have announced their full schedule for the 2022-23 regular season. It won’t be long before Phantoms Phans will again be joining us for all the family fun at PPL Center to cheer for their favorite players and future Philadelphia Flyers.

Hockey returns to the Lehigh Valley early this year when the Philadelphia Flyers take on the New York Rangers on Friday, September 16 and Saturday, September 17 in a pair of compelling games as part of the Rookie Series. This is an opportunity for all hockey fans in this region to get a jumpstart on the Phantoms season to follow.

The Phantoms then will kick off their schedule in downtown Allentown with a pair of preseason home games against our rivals in Hershey and Wilkes-Barre/Scranton on Saturday, October 8 and Wednesday, October 12.

The Phantoms will begin the regular season on the road when they travel to play the Wilkes-Barre/Scranton Penguins on Saturday, October 15.

The excitement at PPL Center then continues with a pair of games on Opening Weekend when the Phantoms host the Cleveland Monsters on Saturday, October 22 and Sunday, October 23 to begin the team’s ninth season of exciting American Hockey League action in the Lehigh Valley. The 2022-23 slate is jammed with great rivalry clashes, a variety of opponents, premium weekend dates, and several special nights.

Also included this year, and for the first time, the Lehigh Valley Phantoms will host a special New Year’s Eve game when they tangle with the Wilkes-Barre/Scranton Penguins on December 31 at 7:05 p.m. to finish off 2022 in style!

“The excitement of the schedule release has the players, coaches and staff eager to get back to hockey in the Lehigh Valley,” Phantoms owner Jim Brooks said. “It won’t be long (early September) until we are putting ice back into PPL Center and welcoming Phantoms Phans to Downtown Allentown as we all enjoy the entertainment and live action of Phantoms hockey – it’s gonna be great to be back!”

Head coach Ian Laperriere will lead the Phantoms into battle with our Keystone rivals for 13 hard-hitting matchups at PPL Center including seven home games against the Hershey Bears and six more against the Wilkes-Barre/Scranton Penguins. There will also be 9 combined PPL Center showdowns against divisional foes such as the Bridgeport Islanders, Hartford Wolf Pack and Providence Bruins among the 14 total opponents who will visit the Lehigh Valley this season.

“I’m so pleased with how this season’s schedule has been constructed,” Phantoms Vice President of Ticketing Richard Lintker said. “It’s ideal for all of our fans and especially those who have joined our Phantoms Premier Membership. Over 83% of our games are on weekends including 15 big home dates on Saturday nights. And the December 31st game is simply going to be a magical evening for all of us. I can’t wait!”

Single game tickets for the Lehigh Valley Phantoms will go on sale September 1. Fans can guarantee tickets to every home game by locking in a Phantoms Premier Membership which are available now. Fans can also choose a custom 2022-23 Partial Season Ticket Plan which will be on sale beginning Monday, July 25.

Details on the team’s terrific promotional schedule will be announced soon.