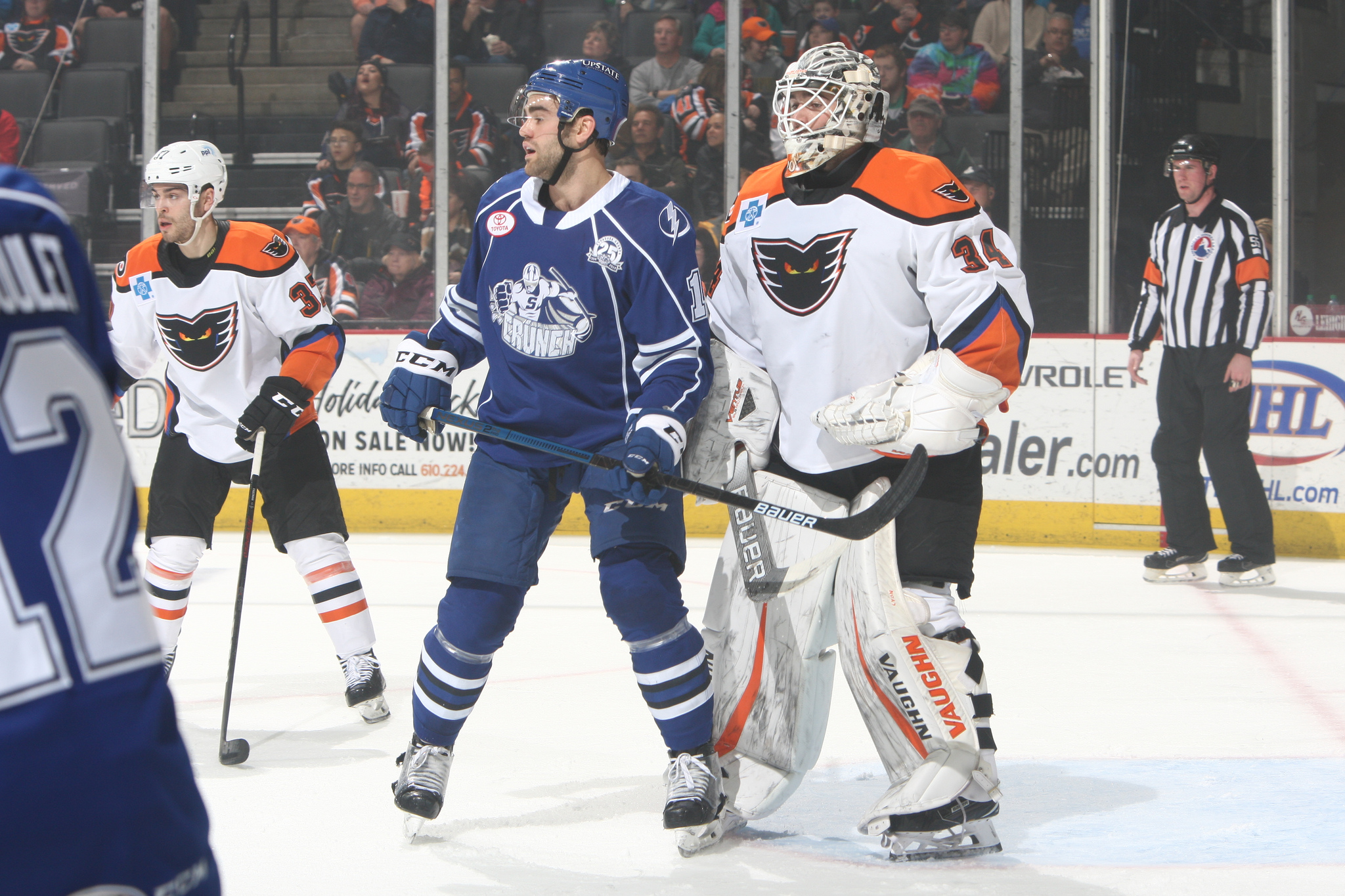 Phantoms Battle To Earn A Point Against Syracuse

Greg Carey scored his 15th goal of the season for the Phantoms to move into the top five in the AHL in goals, as well as up to fourth place with 32nd points after two tonight (1G, 1A). Newly-named AHL All-Star captain, Colin McDonald scored his third goal of the year to break the ice in the second period.

Alex Lyon made 27 saves on 29 shots, including a 14/14 first period and three huge saves in overtime to force the shootout. His counterpart, Connor Ingram was also sensational making 40 saves on 42 shots and four in overtime as the two netminders kept fans on the edge of their seats all game.

The first period started off as a goalie duel as Alex Lyon and Connor Ingram matched zeros. Both teams had solid chances but the goalies stood strong. Lyon made 14 saves for the Phantoms and got some help from the post on a 2-on-1 chance. He also got a big assist from his defense as T.J. Brennan pulled a trickling puck off the goal line to prevent a Syracuse goal. Connor Ingram made 11 saves for the Crunch. The Phantoms best chance of the period came on a Phil Myers shorthanded breakaway chance but was unable to get it past Ingram.

The Phantoms were finally able to beat Ingram 4:34 into the middle frame when Colin McDonald scored his third goal of the season. Greg Carey sprung the captain in on a breakaway and McDonald deked the Crunch goalie and gave the Phantoms a 1-0 lead. 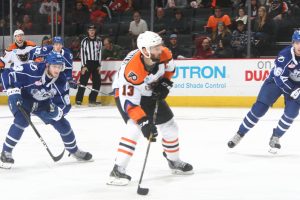 Syracuse was able to tie the game with less than five minutes left in the second period as Cameron Gaunce scored his sixth of the season. Dominik Masin slid the puck over to Gaunce at the top of the circle who hammered a one-timer that just missed a sliding Carsen Twarynski and found the back of the net.

With 41 seconds left in the period, Connor Ingram made his best save of the game as he dove right to left to rob Connor Bunnaman on the power play. The horn sounded as the one-timer appeared to cross the line but it was ruled no goal and remained tied after 40 minutes. 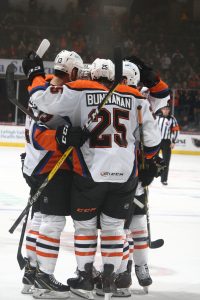 Greg Carey scored his 15th goal of the season 5:02 into the third period after a gorgeous pass from Bunnaman found Carey with a view of nothing but the back of the net. Carey sits tied for the fifth in the AHL in goals and has three goals in the last four games.

Ross Colton was able to answer just 11 seconds later as he was able to stick-handle in front and lift one over Lyon to tie the game 2-2.

The Phantoms had a great chance to retake the lead as Taylor Leier, Carson Twarynski, and Mikhail Vorobyev got loose on a 3-on-1 but after terrific back-and-forth passing, fell victim to another huge save by Connor Ingram, followed by Taylor Leier hitting the post on a rebound chance.

The goalies battled to each earn a point for their teams as the pace increased as the third period wound down. Ingram and Lyon both stood strong in overtime and the Phantoms got their third shootout chance of the season and first in front of the Lehigh Valley crowd. Taylor Leier scored on the first shootout attempt with a gorgeous move that fooled Ingram and brought the fans to their feet. Cory Conacher scored on Syracuse’s last chance to extend the shootout and Carter Verhaeghe eventually won it in the fifth round to earn the second point for the Crunch.

Both teams went 0/2 on the power play and finish the night sitting in third place in their respective divisions.

NEXT TIME OUT: The Phantoms travel to Chocolatetown to take on the Hershey Bears at Giant Center tomorrow at 7:00pm. Follow the action @LVPhantoms on Twitter, on AHLTV or the Phantoms365 App.