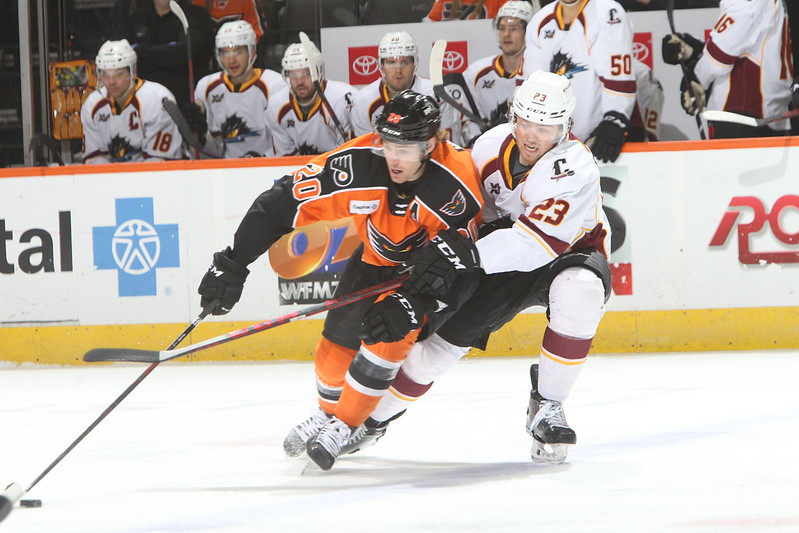 Lehigh Valley, PA – Adam Johnson (5th) scored in the first period and newcomer Colin Felix debuted for the team he grew up cheering for but the Cleveland Monsters pulled away with three goals in succession late in the second period on their way to a 6-1 victory at PPL Center on Wednesday night.

The Phantoms had a depleted and somewhat mish-mash lineup due to more recent injuries to Garrett Wilson, Tanner Laczynski and Maksim Sushko. Consequently, the team skated with only 10 forwards and seven defensemen but also used some of the blueliners up front in a bit of a rotation early.

Newcomer Colin Felix, the son of former Philadelphia Phantoms trainer Chris Felix, made his pro debut for the team he grew up cheering for. The defenseman out of UMass dropped the gloves with Cleveland’s Cole Cassels at the end of the second period and scored a quick takedown in his first pro fight.

Cleveland had a tricky time pulling away and relied on some key stops by goaltender Jet Greaves to hold the Phantoms off. Lehigh Valley had several chances to equalize or close the gap but pucks either missed wide or Greaves came up large.

Cole Fonstad registered a pair of power-play goals to lead the Cleveland attack.

The Monsters took an early 1-0 lead on a goal by Trey Mullin on the rebound of a Justin Scott push towards the net from the right wing during an odd-man rush. Mullin’s seventh of the year found the back of the net five minutes into the game.

The Phantoms equalized ten minutes later on Adam Johnson’s fifth of the year and his fourth with the Phantoms after a Max Willman shot from the left boards handcuffed Greaves and deflected up into the air. Johnson found the rebound opportunity at his feet and quickly converted before Greaves could get set again. Cleveland out shot the Phantoms 15-10 in the fast-paced opening frame that finished with a  1-1 score.

The Phantoms had some strong chances and possession in the opening five minutes of the second period but couldn’t break through. Cleveland finally got some push back and their own surge after that with Nagle making a few nice stops in there before Tyler Sikura (15th) had a backhand chip past Nagle off a left-wing faceoff win.

Lehigh Valley (28-32-15) again some decent looks in efforts to equalize but Cleveland again would find a way. Just two minutes later it was Tim Berni (3rd) who scored on an odd-man rush potentially catching the Phantoms on a line change to make it 3-1 with 5:30 remaining in the second period.

Cole Fonstad (8th) struck on the power play with 1:48 left in the period for a 4-1 lead after Nagle made a highlight-reel save. A rebound to the right circle was converted to complete the quick six-minute burst with a trifecta of markers for the Monsters.

Felix sparked the crowd, and his teammates, and also showed his toughness with his skirmish at the end of the second period against Cole Cassels.

The Phantoms had a third-period power play with looks to try to close the deficit. But Cleveland killed it off and eventually got their own power-play goal on Fonstad’s second tally of the night with 8:3 remaining.

Cassels buried a rebound from the left dot to the top shelf to finish the scoring with 2:35 remaining for the 6-1 end result.

The Phantoms are back at PPL Center for their season finale on Saturday night against the Wilkes-Barre/Scranton Penguins. Star Wars Night at the game will also feature over 20 costumed characters.

Paint the Ice, presented by Dorney Park, is Sunday from 1:30 until 2:30 p.m. The free event is open to the public. Fans should arrive at the Air Products Gate to join us for the opportunity to go onto the ice for all the fun.