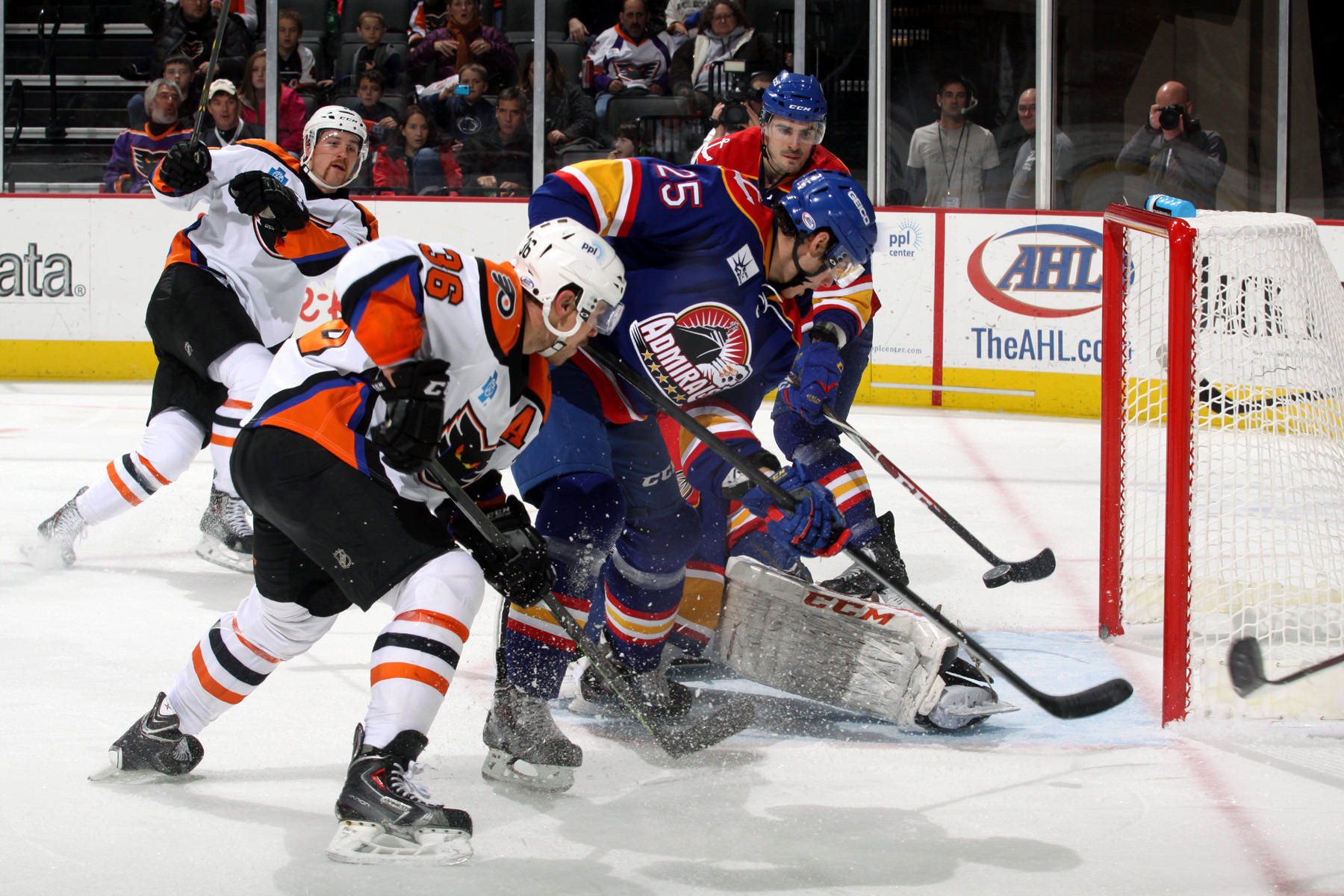 Norfolk, VA – Scott Laughton’s powerful wrister from the right boards blasted through veteran goalie Jason LaBarbera to break a late third-period tie and propel the visiting Lehigh Valley Phantoms to a 3-2 victory at the Norfolk Admirals on Wednesday night. The Phantoms improved to 5-0-0 against the Admirals this season as they opened their three-game road-trip on a positive note.

Laughton’s 11th of the season was also his fourth goal in the last three games as the talented rookie has found his scoring stride again. His game-winner on the power play with 9:15 remaining in the third came as a result of defenseman Adam Comrie’s effort to hold in a Norfolk clearing attempt. As he has done so frequently all season, big forward Zack Stortini provided an invaluable screen to help set up the goal. Laughton’s drive through the Stortini screen caught a piece of the pad of LaBarbera but was still able to sneak through for the deciding tally.

Andrew Gordon (18th) and Jason Akeson (21st) also scored for Lehigh Valley while Rob Zepp provided 30 saves to backstop the triumph. The Phantoms’ have won two of their last three games and improved their road record in calendar year 2015 to a tremendous 12-6-0.

The Phantoms raced out to a 2-0 lead in the opening minutes of the game before the affiliates of the Anaheim Ducks were able to claw their way back into contention. Andrew Gordon’s goal at 4:06 into the first period came in the low slot on the rebound of a Petr Straka shot. Blair Jones also assisted on the opened lamplighter.

Almost exactly four minutes later, it would be rookie Taylor Leier racing one down in the right corner and dropping for the trailing Laughton who quickly maneuvered the puck directly to his left to Akeson who took advantage of his one-timer opportunity with a powerful blast top shelf past LaBarbera.

Akeson’s 79th career goal with the Phantoms franchise moves him within two of fifth place all-time currently held by Paul Healey and Jon Matsumoto who each scored 81 goals in their Phantoms’ careers. Akeson’s 218th career point with the Phantoms franchise moves him within four of fourht-place all-time currently held by Kirby Law who had 222 points for the Phantoms. Finally, Jason Akeson’s 47th point this season moves him to within eight of team-leading Nick Cousins who is currently with the Philadelphia Flyers. Akeson is attempting to lead the Phantosm in total points for a fourth consecutive season.

A turnover in the offensive zone late in the first period would help spark the Norfolk Admirals back the other way with second-year pro Antoine Laganiere taking the shot himself on a 2-on-1 and successfully converting from the left circle over Zepp’s blocker.

Norfolk would equalize with just under three minues remaining in the second period on a power-play scramble in the crease with Max Friberg eventually nudging home his 13th tally of the season. Lehigh Valley had successfully killed 22 consecutive power plays before the Admirals conversion. The Phantoms had not allowed a power-play marker since March 20 at Hartford in the first period.

The last three encounters between the Phantoms and Admirals had gone to overtime and it looked promising for that streak to continue but Scott Laughton had other ideas.

Robert Hagg missed the game due to a flu-like illness. In his place on the blueline, rookie Nick Luukko played in his second career professional game.

Jay Rosehill served the first game of his three-game suspension stemming from an altercation in last Sunday’s game vs. Manchester. Darroll Powe and Austin Fyten were both on the sidelines with injury.

Andrew Johnston played in his ninth game of the season for the Phantoms and his 34th all-time in three partial seasons with the team. The recent callup from Reading had not played for the Phantoms since November after scoring six goals and 14 assists in 42 games in the ECHL this season.

The Phantoms were 1-for-2 on the power play while Norfolk finished at 1-for-2 as well. The Admirals out shot the Phantoms 32-29.

Lehigh Valley has nine games remaining in the 2014-15 regular season including five at home. The Phantoms will face the Admirals three more times in Norfolk’s swan-song season in the American Hockey League. The Anaheim Ducks are moving their AHL affiliate to San Diego next year while the Norfolk Admirals will be fielding an ECHL team. The Norfolk Admirals come to Allentown for back-to-back games on April 10 and 11. The Phantoms return to southeast Virginia on Friday, April 17 in the last-ever AHL game at Norfolk Scope Arena.

Lehigh Valley’s three-game road-swing continues Friday night at the Binghamton Senators in the 10th, and last, clash of the season between the East Division rivals. The Phantoms will travel to Wilkes-Barre/Scranton for a collision with the Penguins on Saturday. Be sure to catch all the road action next week on Fox 1470 AM, online at fox1470.com or via the iHeartRadio app. Coverage begins with the Nazareth Pallet Countdown to Faceoff 45 minutes before puck drop.

The Phantoms then return to PPL Center to open a four-game homestand on Wednesday, April 8th when the Penguins return to downtown Allentown. Wednesday’s game is another $2 Beer Night with $2 Coors Light drafts available from the time doors open until the start of the 2nd period. The Phantoms also have upcoming home engagements on Friday and Saturday, April 10th and 11th with a weekend series against the Norfolk Admirals including a Free Shirt Friday and Fan Appreciation Night on Saturday. Tickets for upcoming home games are available now at pplcenter.com, by calling 610-347-TIXX (8499) or in-person at the Mealey’s Furniture Box Office at PPL Center (701 Hamilton).