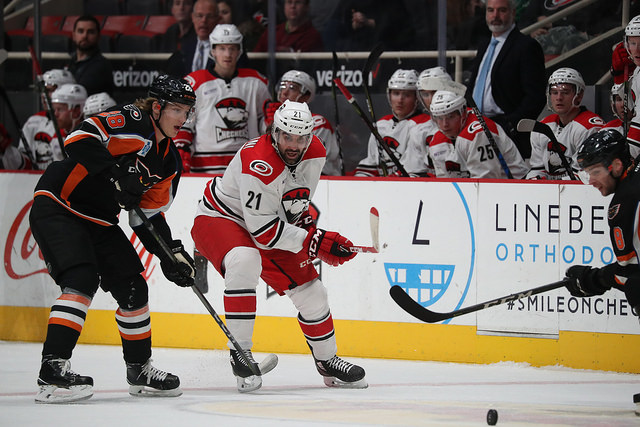 Charlotte, NC – Radel Fazleev scored his first goal of the season as the Lehigh Valley Phantoms looked to play the role of comeback kids again but this time they were unable to turn the trick against the Charlotte Checkers who hung on for a 5-2 verdict on Wednesday night in North Carolina. The Atlantic Division foes split their hard-fought two-game series with the Phantoms having taken the opener on Tuesday 6-3. 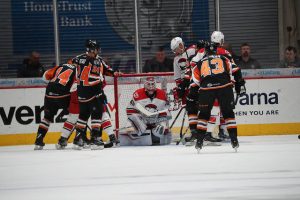 As expected in the highly anticipated matchup of the two most prolific offenses in the conference, the series was not lacking in lamplighters as both squads amassed their share of impressive tallies.

Charlotte built a 4-0 advantage by the latter moments off the second period when the urgency-driven Phantoms roared back into the game and almost mounted a stunning late rally. Matt Read (4th) scored late in the second period on the rebound of a power-play drive from the left wing by Oskar Lindblom to get the Phantoms on the board and build momentum that would carry over into the third. Fazleev’s goal 2:36 into the final frame on a nifty assist by Mark Friedman following a steal by Mark Read cut the deficit down to two and from there it would be one close call after another as goaltender Jeremy Smith and the Checkers hung on.

Oskar Lindblom had a couple fine opportunities in the third period to score what would hav been his fourth goal in five games. His deflection of a point shot just missed the left post and a wonderful individual effort around a defenseman to almost push through a backhander while being tripped up also induced a key power-play opportunity.

The league’s leading goal scorer, Danick Martel, had a couple very narrow misses on his bid for a 16th including a powerful snipe from the left wing aiming for the upper-far corner that was barely snagged in the glove of Smith. 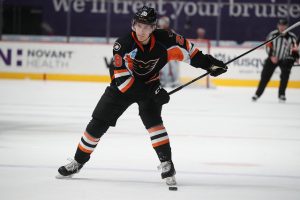 Patrick Brown (4th, 5th) notched a pair of goals for Charlotte to lead the attack for the AHL affiliate of the Carolina Hurricanes. The Checkers captain found a loose puck in the crease on the power play that he was able to flip over the sprawled efforts of John Muse for a 1-0 Charlotte advantage at the first intermission.

Valentin Zykov (13th) also capitalized on the power play just 1:39 into the second period on a nifty pass from the slot following a slapshot rebound. Zykov’s tap-in from the right of the cage doubled the advantage to 2-0.

Andrew Poturalski (9th) continued the momentum at 4:38 with his bar-down snipe from the right wing just past the glove of former Checkers standout goalie John Muse who was receiving his first start in a Phantoms sweater after securing an impressive relief win the night before. Brown again converted with 5:00 left in the second period on a deflection from the left of the goal-mouth after a fine pass from the corner by Saarela.

Down 4-0, the Phantoms refused to throw in the towel and had the Checkers on their heels for the rest of the evening but the mountain was too big to climb in this one and the Phantoms simply ran out of time in their comeback efforts. 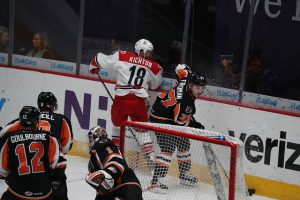 After two highly entertaining games in Charlotte this week the potential is apparent for more fireworks in the rematch series between the two teams at PPL Center in a December 29-30 weekend set.

The Phantoms move to 16-9-3 with the decision and stand at 6-3-1 in their last 10 games. The Charlotte Checkers briefly fell behind Lehigh Valley in the tightly contested Atlantic Division race but then leapfrogged back ahead via the Wednesday night triumph improving to 16-9-1 in their successful revenge performance.

Lehigh Valley out shot the Checkers 38-27. The Phantoms finished 1-for-5 on the power play while the high-octane Charlotte Checkers were 2-for-5.

Lehigh Valley is back at PPL Center next Saturday, December 16 when it welcomes the red-hot Syracuse Crunch to downtown Allentown for the first and only time this season. The AHL affiliate of the Tampa Bay Lightning and defending Eastern Conference Champions are currently riding a league-best nine-game win streak. A limited number of tickets remain for next Saturday’s game and can be purchased online HERE.