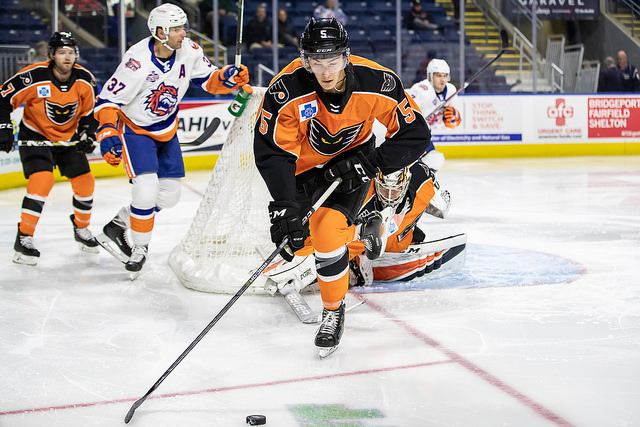 October 21, 2018
Bridgeport, Conn. – David Kase (2nd) and Phil Varone (3rd) buried power-play markers for an early 2-0 lead as the Phantoms earned a standings point in a 4-3 shootoout loss on Sunday afternoon against the Bridgeport Sound Tigers. 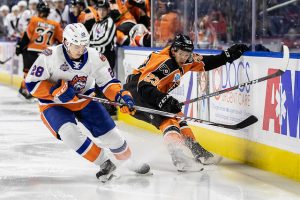 Lehigh Valley (3-2-1) trailed in the closing minutes of the third period when T.J. Brennan (3rd) blasted a right-point rocket with just 2:07 left to force overtime.

The Phantoms were afforded some great chances to win the game in the extra period when Hershey Bears alum Chris Bourque took a slashing penalty providing Lehigh Valley with a two-minute 4-on-3 advantage but Sound Tigers goalie Christopher Gibson came up with the necessary big stops.

The frequent Phantoms’ nemesis, Bourque, made up for his overtime penalty by notching the game-winner in the first round of the shootout striking for a bar-down beauty over the shoulder of goalie Carter Hart.

The Phantoms are 2-0-1 on the road and are 1-0-1 at the beginning of their season-long six game road-trip which continues on Wednesday night at the Hartford Wolf Pack. 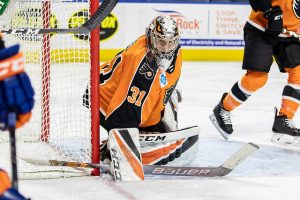 Lehigh Valley’s power play has been clicking throughout the weekend with two goals in each of the last three games. At one point, the Phantoms converted successfully on each of six consecutive full-length power plays beginning with a pair of strikes on Friday night in the third period. The only power play in the streak in which the Phantoms did not score was only 33 seconds long at the end of Saturday’s game at Wilkes-Barre that had already been decided. The Phantoms surging power-play attack has gone 6-for-10 in total over the last seven periods.

But it was the power play in overtime, with a chance to put the game away, that perhaps stings the most as Lehigh Valley was unable to find a seventh man-advantage marker on the weekend. T.J. Brennan’s backhander from the right of the cage was somehow kicked out off the left pad of a fallen Gibson in the closest effort for the Phantoms. Brennan also had a powerful blast later on in the overtime but was again denied by Gibson who kept the Sound Tigers in the game ultimately setting the stage for their dramatic shootout win. The Phantoms are 1-1 in shootouts. 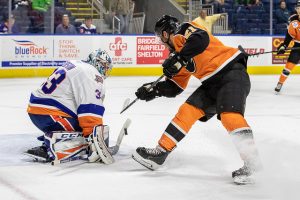 David Kase opened the scoring with the Phantoms fastest goal of the season on a centering pass from behind the net by German Rubtsov. Kase stepped into his second goal of the season from the low slot at 2:53 on a play also assisted by Phil Varone.

The Phantoms extended their lead to 2-0 on their next power play with Varone backhand deflecting a backdoor chip on a centering pass by Greg Carey from the left circle with 49 seconds remaining in the frame. Brennan also assisted on that play as well. The Phantoms only had three shots on goal in the first period but pushed two of them past Gibson for a 2-0 lead at the break.

Bridgeport surged back in the second period with a pair of markers to equalize. Speedy defenseman Devon Toews cruised to the left circle on an entry-pass by former Adirondack Phantoms captain Ben Holmstrom. Toews wrister through Carter Hart five-hole but Bridgeport on the board just three seconds past the midway point of the game at 2-1. 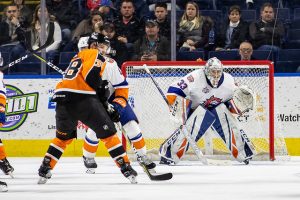 Then Steven Bernier found a free puck in the slot while on the power play for a tap-in on a fortuitous bounce off a cross-ice pass. Josh Ho-Sang’s pass appeared to go off the skate of a Phantoms defender and deflect perfectly back into the slot for the equalizing conversion on the power play at 15:53 of the second period.

Bridgeport came out buzzing to begin the third period and had the Phantoms hemmed in for the first three minutes of the frame without a whistle. The Sound Tigers were blasting away on Hart who made five saves on the furious push to keep the game deadlocked.

The Sound Tigers eventually took the lead on Bernier’s second goal of the game when Bernier scored with just 2:45 remaining on the deflection of a shot from the high slot by first-rounder Kiefer Bellows. Bernier’s second of the night and fourth of the season put Bridgeport in the lead for the first time at 3-2.

But just 42 seconds later it was Brennan blasting through a one-timer from the right point on a D-to-D pass by Philip Samuelsson to again tie the score with just 2:07 left. David Kase also assisted on the play to complete a two-point night.

Taylor Leier, German Rubtsov and David Kase all took turns in the three-man shootout but none were able to beat Gibson while Bourque’s score in the first round held up as the difference maker. 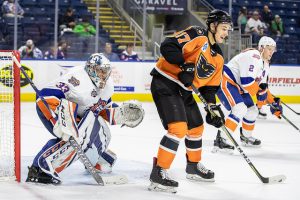 Lehigh Valley out shot the Sound Tigers 32-28. The Phantoms were 2-for-5 on the power play while Bridgeport was 1-for-3. Hart (1-2-1) made 25 saves in the game in a steady performance while Gibson (2-2) turned away 29 Phantoms’ opportunities in the victory.