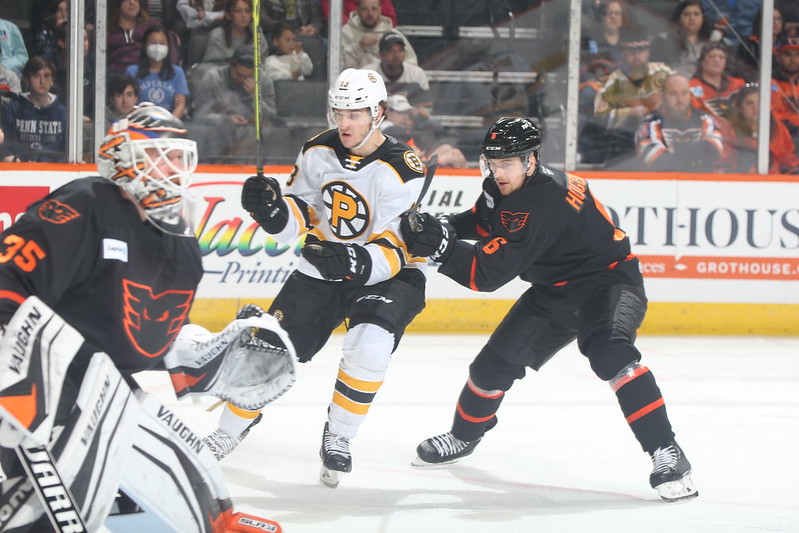 Allison and O’Reilly Score in 3-2 Loss

Lehigh Valley, PA – Cal O’Reilly (20th) and Wade Allison (10th) scored for the Lehigh Valley Phantoms in an entertaining and intense game at PPL Center but Georgii Merkulov starred for the visiting Providence Bruins in his pro debut with two assists and a shootout winning goal in a 3-2 verdict on Saturday night.

The Phantoms also celebrated the return of Pride Night at PPL Center in partnership with the team’s friends at the Bradbury-Sullivan LGBT Community Center of Allentown while promoting diversity and inclusivity in hockey.

The game marked the second overtime or shootout contest in a row for the Phantoms as Lehigh Valley extended its home-ice point streak to eight (6-0-2). Tanner Laczynski and Adam Clendening each recorded a pair of assists while Pat Nagle made 28 saves on 30 shots in the hard-fought contest.

The Phantoms’ seventh power play of the game came late in the overtime session but Lehigh Valley was unable to convert on its 4-on-3 opportunity against one of the top penalty kills in the league as Providence hung on to give itself a chance to prevail in the skills competition.

Lehigh Valley briefly thought they had taken the lead in the third period but Wade Allison’s second time knocking the puck into the net was immediately waved off due to a goalie interference penalty that was called against Allison thus preventing the Phantoms from breaking the tie.

Providence (34-20-10) got the early jump on the Phantoms via a goal by Chris Wagner (15th) at 5:50 into the game set up by Merkulov sneaking behind the Phantoms coverage with his cross-ice pass while catching the Phantoms on a change. 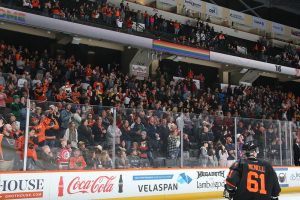 he back of the net on Cal O’Reilly’s power-play strike from the top of the left circle with 3:09 remaining in the first period. Garrett Wilson screened Providence goalie Brandon Bussi at the net-front and the O’Reilly shot sneaked through on the glove side of the lefty-style playing goalie for his team-leading 20th of the season.

The Bruins took the lead again in the second period on a power-play conversion by Justin Brazeau (13th) from the right circle set up by some nice vision from Merkulov finding the opening from all the way over on the left boards. Providence was up 2-1 with 10:43 left in the second.

Lehigh Valley rallied to tie the score early in the third period with Allison possessing the puck on the left boards and then finding an opening to carry towards the slot himself. Allison shot the puck low and past the right skate of his former college teammate at Western Michigan, Brandon Bussi, to even the count at 2-2 with 18:36 remaining.

The Phantoms had some of the better chances in an intense third period but Nagle was challenged as well including a couple big stops on Boston first-rounder Johnny Beecher who came close to scoring in his first-ever pro game as well. One steal of the puck came right in front of Nagle but the veteran goalie was again there to make the big stop.

Lehigh Valley held the advantage in overtime which included a 4-0 shots disparity. One early rush had Cal O’Reilly finding Adam Clendening on a 2-on-1 but it appeared Bussi barely had a piece of it with his shoulder or his head while leaning forward as Clendening just missed on the potential game-winner.

Lehigh Valley had a late overtime power play after a Providence penalty for too many men on the ice but again was unable to cash in.

Merkulov scored in the second round of the shootout for the Bruins and Max Willman was denied on the blocker of Bussi in the third round to secure the Providence road victory in the shootout.

The Phantoms will travel to Providence, R.I. for a Tuesday night rematch and will return to PPL Center to battle the Hershey Bears on Friday night. The Phantoms have six games remaining in the regular season including four at home.