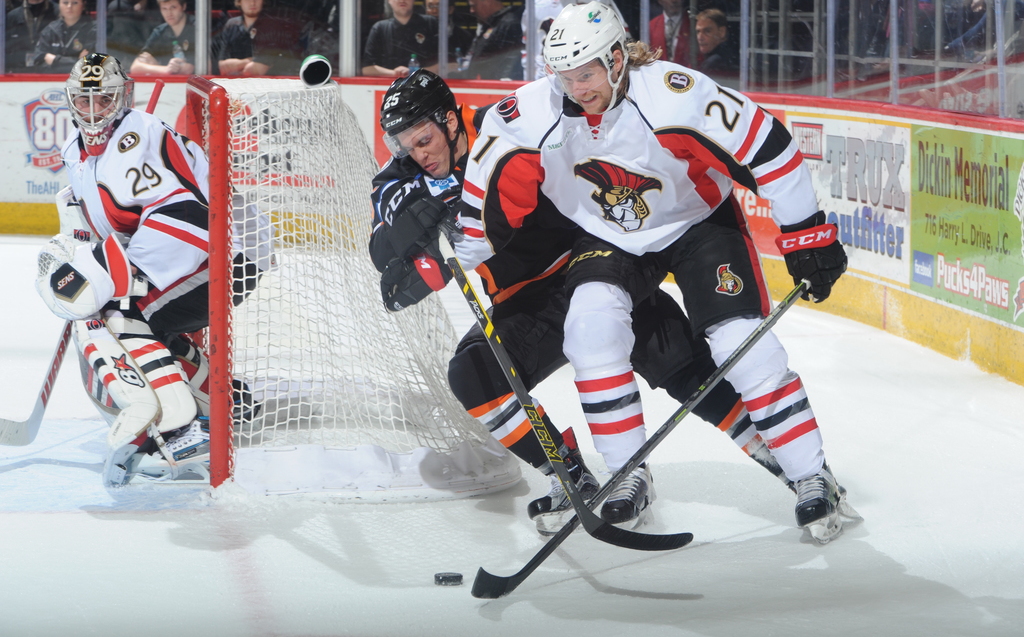 Binghamton, NY – Andrew MacDonald scored for his second consecutive game and Anthony Stolarz put on a 39-save goaltending clinic but the Binghamton Senators rallied from behind to post a 2-1 shootout win over the Lehigh Valley Phantoms on Tuesday night in the Southern Tier.

Matt Puempel’s 10th of the season in the opening minutes of the third period sparked the comeback and then Puempel went high-glove in the third round of the shootout for the only tally in the extra session.

Do not be deceived by the low final score; This game was a wild, run-and-gun affair featuring some spectacular goaltending on both ends of the ice and some point-blank opportunities in a contest that easily could have seen eight or more combined goals.

Binghamton goalie Matt O’Connor’s dramatic stops late in the second period were so acrobatic that he somehow took a lower-body injury moving back and forth in a series of almost-unbelievable saves. He had to be replaced by Chris Dreidger who was perfect in his completion of the game which included securing the shootout win with three straight denials of the Phantoms on Taylor Leier, Petr Straka and Nick Cousins.

With the standings point, the Phantoms have three points out of four and are 1-0-1 after the first two games of their season-long five-game road-trip. The shootout loss was the first in over a year for Lehigh Valley and only their second all-time. Lehigh Valley is 3-1 in shootouts this season and 10-2 in their two seasons since moving into their new facility in downtown Allentown.

The fast-paced affair was one for the taking for both sides. The Phantoms came out buzzing with a 17-shot barrage in the opening period in which they took their initial 1-0 advantage. Andrew MacDonald’s power-play blast from center-point midway through the frame deflected off Binghamton’s Colin Greening and through starting goalie Matt O’Connor. MacDonald has eight points in the last seven games since his return from a brief call-up to Philadelphia which includes four goals and four assists. The veteran defenseman has also scored in consecutive games.

Nick Cousins assists was good for his team-leading 28th point of the year moving him into fourth in the AHL. Cousins has 10 points including seven assists in his last 10 games since his return from a four-game call-up to the Flyers. Petr Straka also received credit for a helper upping his point total to 24 which is second-most only to Cousins.

The power-play strike was the eighth in the past seven games for the Lehigh Valley Phantoms who have gone 8-for-33 in that stretch for an impressive 24.2% conversion rate.

Lehigh Valley’s penalty kill continued their dominance as well holding the Senators to 0-for-3 on the power play. The Phantoms are 26-for-27 on the P.K. in the last seven games for a 96.3% success rate. The Phantoms have been perfect on the kill over the last four games having successfully turned away the last 16 consecutive power plays they have encountered.

Lehigh Valley dominated the first period to the tune of a 17-8 shots advantage but the host Senators, en route to their fourth straight win, came out flying in the second period and cranked up 15 shots towards Anthony Stolarz all of which were successfully repelled by the 21-year-old Edison, NJ native. Mike Kostka had a crossbar shot from the right-point that bounced away but otherwise Stolarz was in perfect position to handle everything the Sens through at him.

Late in the second period, the Phantoms received back-to-back power plays including 30 seconds of 5-on-3. That’s when O’Connor stood on his head with a series of tremendous stops against Lehigh Valley’s Nick Cousins, Colin McDonald and others. Many of his saves came on shots from the low slot or in the crease.

After making way for Dreidger, O’Connor would not be seen again as the rookie netminder went straight to the Binghamton locker room. The Senators penalty kill picked up the slack from there to help out their new goaltender a bit more.

The Senators finally capitalized just over a minute into the third period when Mike Kostka’s low drive from the right point was chopped down by Matt Puempel and then trampolined over the left shoulder of Stolarz for the tying tally.

Lehigh Valley was granted a power play later in the period but it was Stolarz who had to stand on his head again with back-to-back breakaway denials on Buddy Robinson who was denied off the pad of Stolarz and then against Travis Ewanyk who took his shot a little higher on Stolarz to try to find an opening on the big goaltender but missed wide.

During the three-on-three overtime, the Phantoms received a late power-play opportunity in the closing minute when former Adirondack Phantom Kyle Flanagan was tagged for a too many men infraction. But the Phantoms weren’t able to challenge too much on Dreidger and when Taylor Leier’s last-second blast from the left circle was knocked away with the blocker it would mean the two teams would proceed to the shootout in which the Phantoms have been perfect for over a year.

Lehigh Valley’s last shootout loss was on December 6, 2014 but Matt Puempel rushed straight at Stolarz and connected on a laser high-glove in the bottom of the third round for the Binghamton win.

Binghamton out shot the Phantoms 41-39. Lehigh Valley was 1-for-5 on the power play while Binghamton finished 0-for-3.

The Phantoms continue their five-game road swing on New Year’s Eve with a Thursday evening engagement at the Hershey Bears at 7:05. The team then travels to Portland, Maine for a pair of weekend matchups on Saturday and Sunday to commence the 2016 portion of the schedule. Catch all action on Fox Sports 1470-AM in the Lehigh Valley or online at FOX1470.com or the iHeartRadio app.

OT Period- No Scoring.Penalties-served by Flanagan Bng (bench minor – too many men), 4:09.