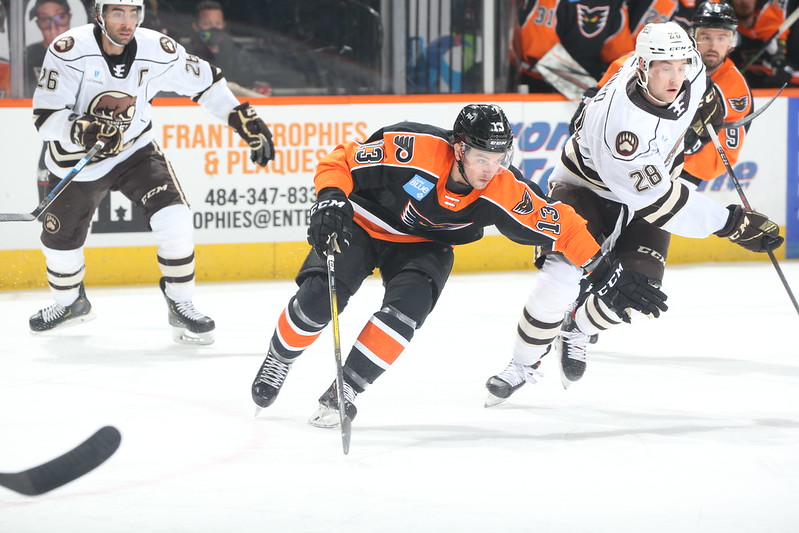 Lehigh Valley, PA – Promising young defenseman Cam York made his belated professional debut and the Phantoms shook off the rust as they played their first game in 16 days but the Hershey Bears capitalized on a penalty-filled game in a 6-1 victory at PPL Center on Wednesday night. The game marked the largest margin of defeat for the Phantoms this season who were returning to games after various postponements due to COVID protocol.

Lehigh Valley’s five-game point streak came to an end. Ryan Fitzgerald (10th) scored the lone goal for the Phantoms while Cal O’Reilly acquired his 495th career assist tying him with Hershey Bears legend Chris Bourque for 11th most all-time in the American Hockey League. Connor McMichael paced the Bears’ attack with two goals and one assist while Cameron Schilling had three assists. 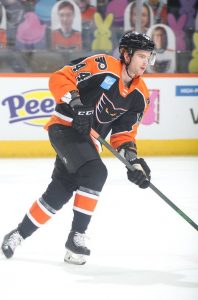 York, the Flyers first-round selection in 2019, had barely skated over the last month since his collegiate career had ended with the University of Michigan with a canceled game at the NCAA tournament that was followed by a quarantine in Philadelphia upon signing his pro contract.

York knows this is just the start and he will get back to his full capabilities and talents in the near future.

“You ask any hockey player and it seems like once you get out of your routine it is a really tough situation,” York said. “As a hockey player, everything is about having a schedule and a certain routine. When you get thrown out of that for five weeks or whatever it was. It almost felt like I had a little offseason there. It’s just a weird situation to go from playing games at Michigan to having that break and then having to ramp it up again especially at the professional level.”

Hershey raced out to a 10-1 shots advantage to begin the game including a rebound put-back goal for Shane Gersich (6th) just past five minutes into the game and then a power-play goal from the right circle by Connor McMichael for a 2-0 lead after one. The Phantoms outshot the Bears 5-4 for the remainder of the period after the initial surge. The first period also included six power plays with each side going a man-up three different times.

Lehigh Valley poured it on against Pheonix Copley to open the second period with a 6-0 shot advantage but the Bears hung on and Copley made a couple strong stops. Another Phantoms penalty was quickly converted for a power-play goal for McMichael’s second of the game and tenth of the season on what was their first shot of the period almost seven minutes into the frame.

Axel Jonsson-Fjallby scored on the rush from the left circle sliding a puck past the right skate of his former teammate in Sweden, Felix Sandstrom, for a 4-0 lead after two. Brennan Saulnier took exception to a cross-check from Eddie Wittchow late in the second period inducing both players to drop the gloves in an energetic scrap.

Phillippe Maillet (2nd) buried his power-play opportunity in the third for a 5-0 lead.

The Phantoms responded with their own power-play goal with Ryan Fitzgerald (10th) converting down low after it was worked in by Cal O’Reilly and Logan Day. O’Reilly’s assist was his team-leading 11th of the season and 495th of his career tying him for 11th place all-time in the AHL with former Hershey Bears great Chris Bourque.

Brett Leason (6th) capped the scoring with a shorthanded breakaway goal with 8:39 left for the 6-1 final.

The Phantoms are 5-3-0 against the Bears this season. The Bears went 3-for-7 on the power play against the league’s top penalty kill. It was only the second time this season the Phantoms had allowed more than one power-play goal in a game.

The Phantoms travel to Newark, NJ on Friday night to take on the Binghamton Devils and will return to PPL Center on Saturday night for a rematch against the Devils. Tickets are on sale for Saturday’s game and remain available for all upcoming Phantoms home games at phantomshockey.com