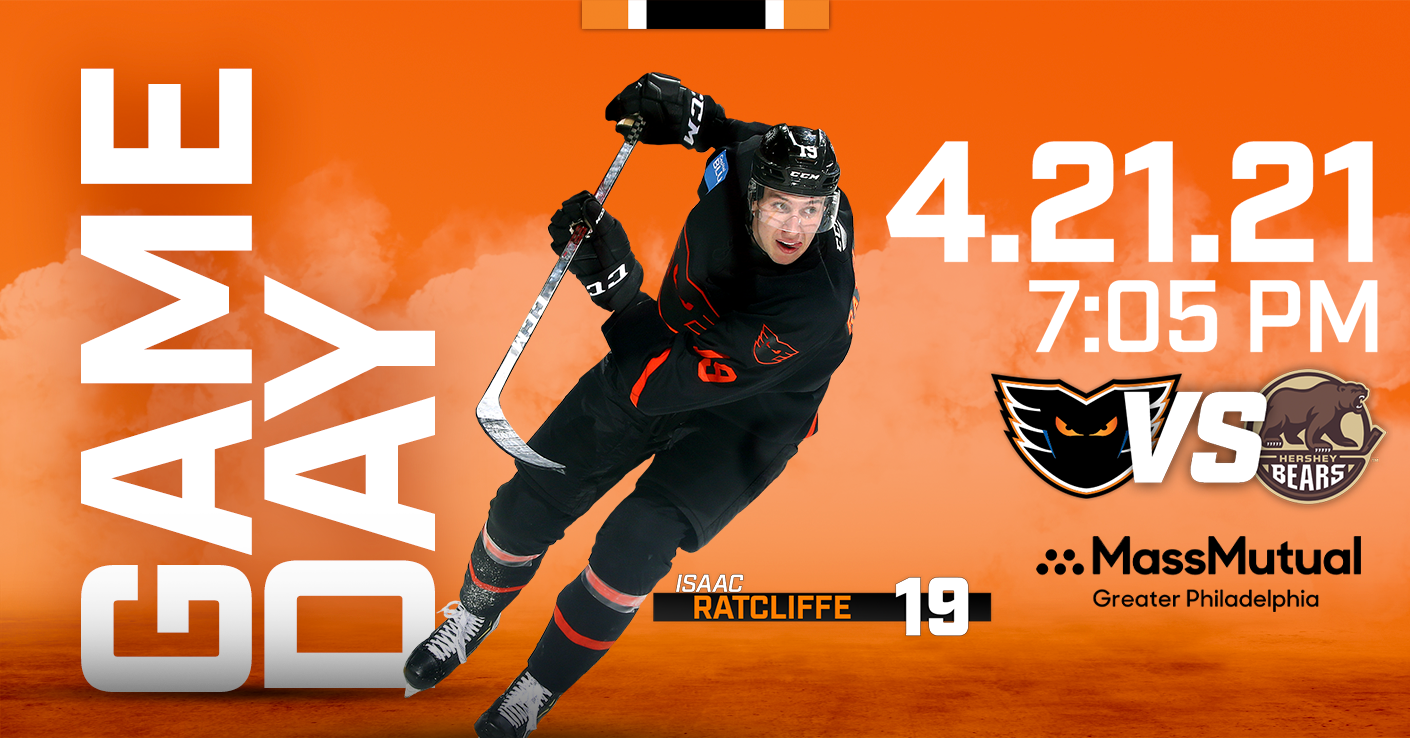 Tonight’s Game – The Lehigh Valley Phantoms return for their first game in 16 days as they look to stay in first-place and continue their five-game point streak. Hershey arrives to PPL Center on a four-game win-streak and trails the Phantoms by percentage points in the North Division.
The Phantoms are 4-0-1 in their last five and 7-1-1 in their last nine. Tonight is the 19th game of the season for the Phantoms and the team’s ninth at home. Lehigh Valley is 5-2-0 against Hershey.

Last Time Out – On Monday, April 5 at Newark, the Phantoms secured a standings point in a fifth consecutive game but had their four-game win streak stopped in a 2-1 shootout loss at the Binghamton Devils. Linus Hogberg scored his first career professional goal in North America to tie the game at 1-1 in the third period thus earning the Phantoms the point. Tyson Foerster and Ryan Fitzgerald both converted in the shootout but the Devils went 3-for-3 to squeak out the win.

Back in Action – The Leigh Valley Phantoms were away from the ice for nine days due to COVID protocols and game postponements. The Phantoms resumed practices on Monday in preparation for their first game in 16 days on Wednesday, April 21 after having not played a game since Monday, April 5 at Newark. The team’s last home game was Saturday, April 3 in a 4-3 shootout win against Wilkes-Barre/Scranton.
Lehigh Valley had three home games postponed during their stretch away from the ice on April 10, April 11 and April 18.

York is Here! – Big Ten Defenseman of the Year Cam York signed an NHL Entry-Level Contract with the Philadelphia Flyers and was officially added to the Phantoms roster on April 1. The southern California native from Anaheim Hills was captain of the USA team that won the Gold Medal at the 2021 World Juniors in Edmonton. York just completed his sophomore season at the University of Michigan and was a first-round selection of the Philadelphia Flyers at the 2019 NHL Entry Draft.

Comeback Kids! – The Phantoms have gone 5-3-1 in games in which they were trailing at the second intermission. That is easily the most comeback wins in the league and they are the only team with a winning record when trailing after 40 minutes. Additionally, the Phantoms are 3-0-1 when tied after two periods giving them a combined record of 9-3-2 when trailing or tied at the second intermission.
Half of the team’s games have gone to overtime; 9 out of 18. Lehigh Valley is 5-2 in overtime decisions and 1-1 in shootouts. The Phantoms have played consecutive shootouts in its last two games on April 3 and April 5.

Get Your Tickets, Here!! – The Phantoms and PPL Center are pleased to announce we are “Back to Live.” The Phantoms are now permitted to allow 2,500 fans per game. Limited tickets for all upcoming Phantoms home games are available at phantomshockey.com

McIntyre Thrives in The Valley – 28-year-old goalie Zane McIntyre is not only a new Daddy, he is also having a tremendously successful debut campaign with the Phantoms. McIntyre is 8-1-2 with a 2.19 goals-against avg. that rates 6th in the AHL and 3rd among active AHL goaltenders. His .926 save percentage is 4th best in the AHL. The former Mike Richter Award winner at the University of North Dakota has played in 195 career AHL games over six seasons. He spent first four years with Providence in a stretch that also included an AHL All-Star Classic appearance at PPL Center in 2017.

The Series – The Phantoms are 5-2-0 against the Bears this season. Last time they met on March 31 saw a four-point performance from Tyson Foerster (2G, 2A) in a 4-1 win over Hershey. Defenseman Martin Fehervary has scored 1-4-5 vs. Lehigh Valley and Phillippe Maillet used a five-assist game against the Phantoms on March 23 in a 6-2 win to eventually earn CCM/AHL Player of the Week honors. The Bears are 2-for-22 on the power play against the Phantoms but have 3 shorthanded goals in the series. Lehigh Valley is 6/32 (18.8%) against Hershey.