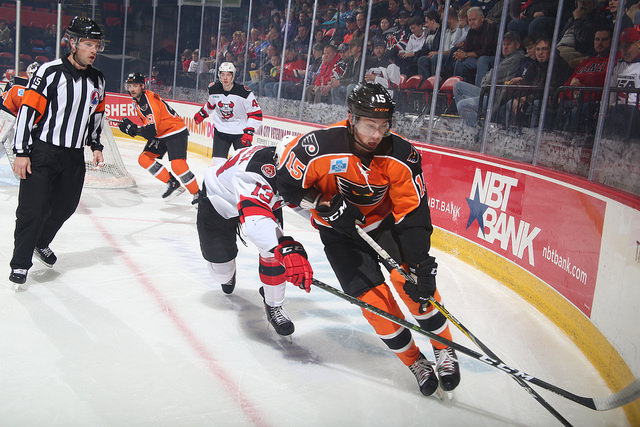 Binghamton, NY – Offensive fireworks have been par for the course for the Lehigh Valley Phantoms of late. Saturday night in Binghamton, the Phantoms surged back from a two-goal deficit to post an invigorating 6-5 win against the Devils. Chris Conner notched his second consecutive four-point night while Danick Martel ran his goal-streak to four with his league-leading 12th lamplighter of the season in just 12 games.

Lehigh Valley has points in eight of their last nine games (7-1-1) to run their overall record to 8-2-2. The Binghamton Devils (5-3-1) suffered just their third regulation loss of the season, two of which have come to the hands of the Phantoms on their own home ice.

Conner’s performance of two goals and two assists boosted his two-game weekend total to three goals and five assists for eight points. Conner took part in each of the first four goals for the Phantoms. Phil Varone also boasted a four-point performance with a quartet of helpers. And Martel’s goal-streak with five conversions in the last four games has pushed the third-year pro even further away from the rest of the pack. His 12 goals are five more than the next highest goal producers in the American Hockey League who seem to be collectively left behind in the dust while Martel continues his torrid pace. 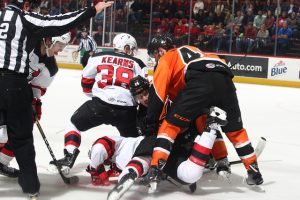 Dustin Tokarski entered in the third period in relief of Alex Lyon with the Phantoms trailing 4-3 and the guys in front of him responded with three straight goals from Conner, T.J. Brennan and Nicolas Aube-Kubel for their first lead of the night. The Phantoms held on for the win from there.

The Phantoms notched a couple more power-play goals on a 2-for-6 performance and have now scored 8 man-advantage markers in their last 5 games.

Lehigh Valley overcame two-goal deficits on nine different occasions last year to post wins and also rallied from second intermission deficits an AHL-leading nine times a season ago. The Phantoms did both again in this contest as they continued their thrilling comeback tendencies.

Binghamton raced out to a pair of two-goal leads in the first period taking 2-0 and 3-1 advantages against the visitors. Nathian Bastian down low and Nick Lappin on a back-door rebound propelled the Devils to their initial stake.

Cole Bardreau (2nd) struck for the Phantoms down low banging away on a loose puck in the blue that eventually eluded goalie MacKenzie Blackwood to the left skate side. Conner and Varone assisted on the goal to begin their respective four-point evenings. It was Chris Conner’s 501st career point as pro including his 451st in the AHL. The 33-year-old veteran reached the 500-Point milestone the night before with his third-period goal against Wilkes-Barre/Scranton. 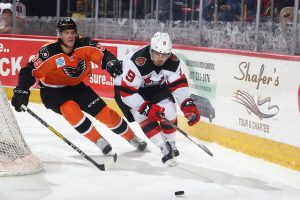 But Blake Pietila struck for Binghamton with just under three minutes remaining in the opening frame with a wrister from the top of the right circle that beat Lyon to the glove side. The Phantoms had a late 5-on-3 at the end of the first period and a 5-on-4 that carried over into the second but still found themselves trailing 3-1.

The Phantoms got the comeback train rolling a few minutes later. T.J. Brennan connected with Conner on a home-run pass that sprung the speedy winger into the Devils’ zone uncontested on a breakaway where he slid through his backhander between the skates of Blackwood to cut the Devils lead to 3-2 at 4:22 into the second period.

Lehigh Valley evened the score just over two minutes later on the power play when Conner took the puck behind the net and connected with Danick Martel on the backdoor in the right circle for a one-timer before Blackwood could record. Martel’s continued scoring prowess had brought the Phantoms to even for the first time on the night at 3-3.

Binghamton retook the lead after the 12:00 mark of the second when Jacob MacDonald’s drive from the point would escape the grasp of a potentially screened Lyon. The Devils enjoyed a 4-3 lead at the second intermission at which time the Phantoms opted to bring in Tokarski in relief.

The Phantoms offense continued to thrive in the opening minutes of a period. Just 2:15 into the third, Bardreau from the left of the cage would tip a Varone pass back to Conner in the left dot with a quick blast home. Conner’s second of the night and third of the weekend completed yet another four-point evening and, more importantly, had tied the game at 4-4. 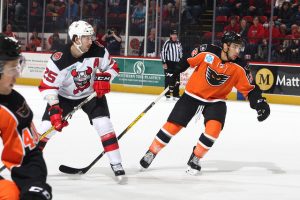 Just over three minutes after that was T.J. Brennan’s power-play drive from inside center-point that caught Blackwood leaning the wrong way. The Phantoms took their first lead of the night at 5-4 with just under 15:00 remaining in regulation. Brennan’s second goal of the weekend came in his first games back since missing three weeks with injury. His 136th career goal places him 30 behind former Philadelphia Phantoms great John Slaney’s total of 166 which stands as the all-time AHL record for goals by a defenseman.

Danick Martel was hoping for a lucky 13th strike of the season but his one-on-one play was knocked off his stick to the corner. Martel raced to the puck and wheeled around to the onrushing nicolas Aube-Kubel who was speeding into the zone. Aube-Kubel’s blast from the high, left slot with 9:54 remaining extended the Phantoms lead to 6-4.

Nick Lappin scored against Tokarski on a rebound down low to cut the margin to 6-5 with 2:20 to go. The Devils penetrated with an extra attacker into the zone but a number of blocked shots and passes pushed the Phantoms through to the hard-earned victory.

Defenseman Adam Comrie joined the team from the Reading Royals earlier in the day on a Professional Try Out Contract and suited up for the Phantoms for the first time since April, 2015. It was Comrie’s 73rd career game in a Phantoms sweater. James De Haas joined him on the blueiline playing in his second career AHL game

Lehigh Valley out shot Binghamton 23-19. The Phantoms went 2-for-6 on the power play while the Devils finished at 1-for-5.

The Lehigh Valley Phantoms return to PPL Center on Sunday, November 5 when the Phantoms welcome the Toronto Marlies to downtown Allentown for the first and only time this season in a 5:05 p.m. showdown. Sunday’s game is Pink in the Rink presented by American Cancer Society with a Pink Flashlight Giveaway for the first 6,500 fans in attendance. Only a limited number of tickets remain for Sunday’s game and can be purchased online by clicking HERE.