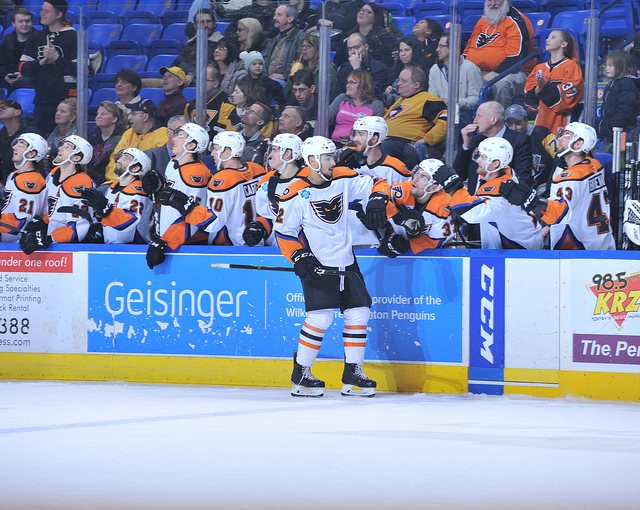 Wilkes-Barre, Pa. – Tyrell Goulbourne scored with just 1:02 remaining to cap an impressive comeback in the third period at Wilkes-Barre/Scranton as the Lehigh Valley Phantoms rallied for a 5-3 win against the rival Penguins in the first game back from the holiday break. 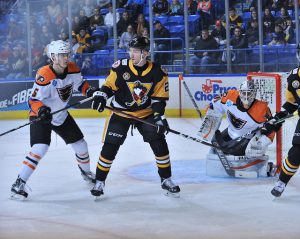 Lehigh Valley (18-9-3) trailed 3-1 entering the final frame but then went into their somewhat characteristic comeback mode to improve to 3-0-1 since Kerry Huffman took over active head coaching duties following the promotion of Scott Gordon to interim head coach of the Philadelphia Flyers. The Phantoms also improved their road record this season to 10-3-2.

The comeback was triggered by defenseman Philippe Myers who assisted on three consecutive goals in the third period rally. Tyrell Goulbourne (4th, 5th) scored a pair of goals for the second consecutive game after the feisty and speedy winger had only struck for one lamplighter in his first 20 games of the season. Taylor Leier (7th) also scored in a second consecutive game while Connor Bunnaman (7th) and Philip Samuelsson (3rd) also found the back of the net. 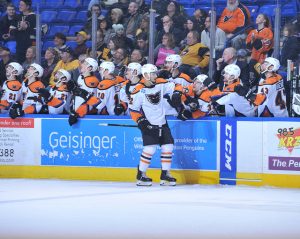 Myers from the left point connected with Leier in the slot on a shot-pass that was deflected through the five-hole of Penguins goalie Tristan Jarry with 17:22 remaining to pull the Phantoms to within 3-2.

An exciting stretch of fast-paced hockey was capped by a long-stretch pass by Myers who somehow located Connor Bunnaman just a half-stride ahead of a defenseman. The rookie winger, Bunnaman, converted on his breakaway on a blast from the slot to the upper-right corner with 6:37 left that evened the game at 3-3.

The Phantoms took their first lead of the night with just 62 seconds remaining when Myers found Goulbourne at the net-front for a quality chance down low on Jarry. After the shot just missed, Phantoms captain Colin McDonald quickly pushed the puck back out to Goulbourne on the left of the cage who took advantage of his second chance to this time win the game and put the Phantoms up 4-3.

Samuelsson scored on a quirky bouncer from the red-line just seven seconds later on a hopping shot that somehow knuckle-balled past Jarry’s left leg to finish the scoring. 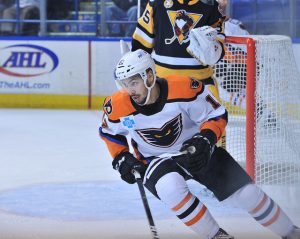 Goulbourne’s big game came almost exactly a year after a huge performance also at Wilkes-Barre. On December 27, 2017 he had a Gordie Howe Hat Trick that included a fight with 6’5″ tall Jared Tinordi. A few days later, Goulbourne received his first-ever NHL call-up. Goulbourne’s back-to-back multi-goal games come after he had only had one such performance in his entire year and that debut two-goal output was over three years ago in November of is rookie season in 2015.

Alex Lyon (6-4-1) handled some tricky bounces and turned aside 29 Penguins offerings in the victory over Wilkes-Barre’s Tristan Jarry. Ben Sexton led the Penguins attack with a pair of goals in the last six minutes of the first period. His second goal, for a 2-0 lead, came with just 2.2 seconds remaining on a shot from the right corner that somehow squeezed through Lyon. Teddy Blueger also scored for the Penguins with just 5.5 seconds left in the second period after an unlucky bounce from a dump-in off the stanchion behind the goal caught Lyon out of the crease to play a dump-in. That bad hop gave the Penguins a 3-1 lead but the Phantoms had another exciting rally in store to thrill the fans who had traveled up from Lehigh Valley to support their team in northeast Pennsylvania.

Lehigh Valley is 2-2 against Wilkes-Barre/Scranton this season and the teams will rematch this weekend at PPL Center. 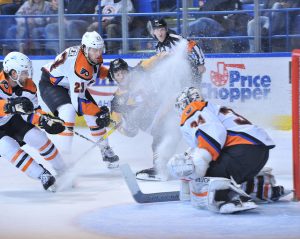 The Phantoms host the Providence Bruins and Wilkes-Barre/Scranton Penguins on Friday and Saturday nights to close out the 2018 portion of the schedule. The team is celebrating its fifth season in the Lehigh Valley with specialty jerseys which will be auctioned off to the fans following the Saturday game. Special Family Value Packs remain on sale for both upcoming games this weekend offering 5 tickets, 5 sodas and 5 hot dogs all for only $69. Call the Phantoms for more information at 610-224-GOAL (4625) or click the link on Phantoms social media or the Phantoms 365 app.