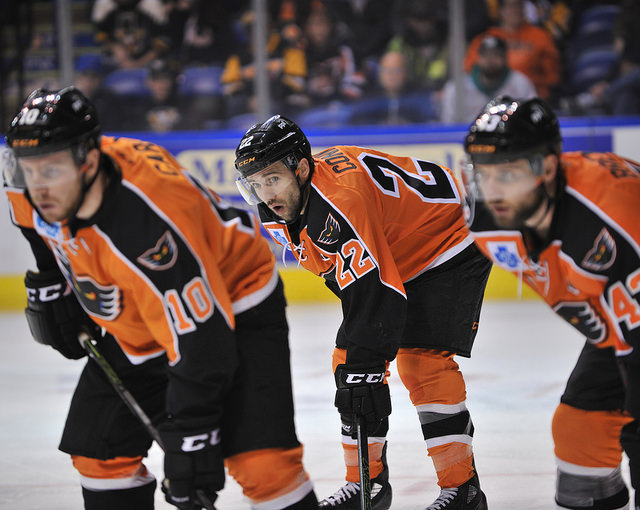 Wilkes-Barre, PA – Rookie talent Oskar Lindblom (9th) notched his first-career three-point game and chipped home the game-winning goal with 6:07 remaining to cap a third-period comeback win for the Lehigh Valley Phantoms 3-2 at Wilkes-Barre/Scranton on Saturday night. Lehigh Valley departs for the holiday break on a four-game point streak at 3-0-1 as they leap ahead of the Penguins once again in the almost-constantly changing Atlantic Division standings.

Chris Conner scored a goal and an assist on his 34th birthday. And Nicolas Aube-Kubel registered his ninth goal to tie the game with 10:10 remaining in regulation. Dustin Tokarski was again stellar in net turning aside 39 of 41 Penguins shots. 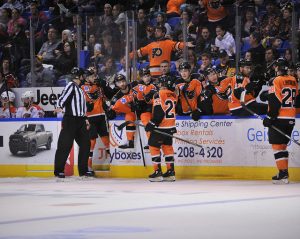 Lindblom continues his outstanding play with his second multi-point game in a row while reaching three points for the first time. The 21-year old from Sweden has points in six of the last seven games scoring four goals and five assists for nine points in the that span. He also has five goals in his last nine games.

Lehigh Valley rallied from a second intermission deficit for the fourth time this season representing the most final-period comebacks in the AHL. The Phantoms led the circuit in third-period comeback wins last year as well accomplishing the feat nine times in 2016-17.

The Phantoms improved to 3-2-1 against their rivals from Northeast Pennsylvania and now stand at 8-3-2 in their last 13 games to up their overall mark to 19-9-4.

Wilkes-Barre/Scranton struck for the opening goal late in the first period with carry-over momentum from a power play. As they continued to shower Tokarski with shot after shot eventually they would put one through when Zach Aston-Reese offered a drive from the left boards that deflected off the upper-body of Teddy Blueger and into the goal at 18:16 for a 1-0 lead. Wilkes-Barre/Scranton out shot the Phantoms 14-9 in the first period.

Birthday Boy Chris Conner would strike back on some quick movement out of the Phantoms zone. After a pass was blocked by James de Haas it would be spotted by Lindblom who offered an outlet to Corban Knight racing up the middle. Former Penguins standout Chris Conner weaved into the zone and drove a shot from the high, left slot off the inside of the left post to rattle around the cage for his sixth goal of the season with Knight and Lindblom credited with the assists. The Phantoms had evened the score at 1-1 at 16:35 into the second period and were quickly threatening to take the lead. 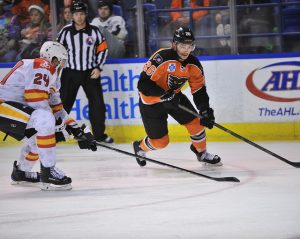 Another blocked pass would this time result in a Steven Swavely breakaway. The second-year pro from the University of Maine, who had scored in each of the previous two games, was denied on the right pad of Casey DeSmith but trailing on the play was Danick Martel who offered a rapid rebound response also repelled by DeSmith. Aube-Kubel was next but his blast sailed just wide.

Shortly after the Phantoms just missed on their three successive attempts it would be the Penguins to take advantage of a bouncing puck from behind the Phantoms goal that was squeezed out in front to Ryan Haggerty on the left of the cage who deposited his 11th of the year at 18:48 into the middle stanza thus staking the hosts to the advantage again at 2-1.

With tensions rising in the one goal game into the third period a couple of the feistier competitors agreed to drop the gloves when Tyrell Goulbourne of the Phantoms squared off with local product Patrick McGrath of the Penguins. Both combatants were assessed five-minute fighting majors in their efforts to elevate the intensity of their respective squads.

Lehigh Valley rallied to even the score at almost the midway mark of the third when Phil Varone, from behind the net, connected with Aube-Kubel at the base of the left circle whose quick chip at DeSmith somehow just squirted through for the tying tally. Aube-Kubel’s ninth goal of the season equals his rookie total from a year ago. The talented second-year winger had already surpassed his point total and has now amassed 22 points before the midway point of the campaign after registering 18 as a newcomer.

Just four minutes later the Phantoms would have their first lead of the game. Corban Knight, on the right boards, helped wriggle the puck free and the deflection connected with Conner cutting into the slot whose backhand drop for Lindblom back on the right of the cage caught DeSmith without a chance. Lindblom’s ninth of the season came at 13:53 into the third and the Phantoms had successfully turned the tables on the Penguins to take their first lead of the night at 3-2. 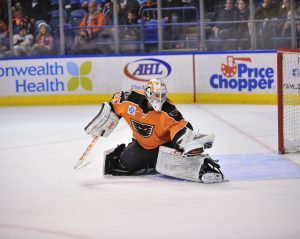 The Phantoms missed a couple of chances for an empty-net in the closing seconds including a line-drive from the red line by Chris Conner that sailed past the right post as well as a couple of offerings from Danick Martel. Ultimately the Phantoms successfully held the puck along the boards to eat up more time and wind down the clock on their way to closing out the victory.

Dustin Tokarski improved to 9-2-3 with the stellar effort and earned his second consecutive win in starts against the Penguins. Tokarski also registered a 39-save shutout against Wilkes-Barre/Scranton on December 6 at PPL Center in a 5-0 victory.

Rookie defenseman Philippe Myers returned from injury and played in his first game since November 25th. The big 20-year-old blueliner blasted through a slap shot from the right point on his first shift of the game that rang off the right post and bounced out.

The two teams will rematch on the other side of the holiday break with a 7:05 p.m. engagement back in Wilkes-Barre on Wednesday night.

Lehigh Valley then returns home on Friday, December 29 and Saturday, December 30 when the Phantoms host the Charlotte Checkers, AHL affiliate of the Carolina Hurricanes, for a two-game series at PPL Center. December 30th is Retro Night featuring 80’s style fun and retro, purple jerseys that will be offered to the fans via a live post-game jersey auction. Tickets for are available now and can be purchased online by clicking HERE.