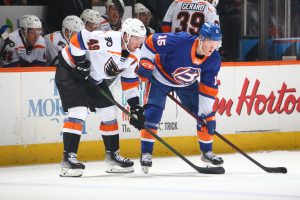 Weekly Recap
Friday, Nov. 26
Syracuse Crunch 4 – Phantoms 1
The Phantoms took an early 1-0 lead on Max Willman’s team-leading eighth goal of the season in the slot set up by Jackson Cates and also a Hayden Hodgson forecheck. Lehigh Valley carried a 1-0 lead past the midway point of the game but the Crunch finally broke through against Felix Sandstrom late in the second period. Back-to-back goals late in the third just 64 seconds apart put Syracuse ahead 3-1 and then a late empty-netter finished the night.

Saturday, Nov. 27:
Bridgeport Islanders 4 – Phantoms 1
The Phantoms again scored the first goal of the game on Cal O’Reilly’s backdoor tap-in on a snappy power-play cross-ice feed from Jackson Cates at the left boards. Austin Czarnik scored on the power play late in the first for Bridgeport and Paul Thompson’s attempt to connect on the backdoor bounced off a defenseman and in for a 2-1 lead early in the second period. The Phantoms dominated the third period and had a strong push but 35-year-old veteran Cory Schneider held strong in the Islanders net and Bridgeport eventually scored a pair of empty-netters in the last two minutes to seal the victory. New Phantoms goalie Jon Gillies made 17 saves on 19 shots in his Phantoms debut. Brennan Saulnier’s big hit and feisty attitude drew roars of approval from the energetic PPL Center crowd.

Sunday, Nov. 28:
Phantoms at Hershey Bears
Sunday’s game at Hershey was postponed due to AHL COVID-19 protocols affecting the Hershey Bears. A rescheduled date for the game has not yet been announced.

Upcoming
Wednesday, December 1 – Hershey Bears at Phantoms
Wednesday’s scheduled game against Hershey has also been postponed to to AHL COVID-19 protocols affecting the Hershey Bears. A rescheduled date has not been announced. Fans should hang on to their tickets for that game which will be good for the rescheduled date. Questions can be directed to ticketsales@phantomshockey.com 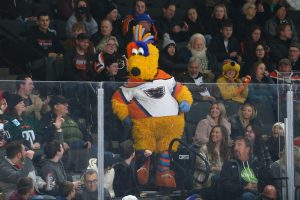 Saturday, December 4, 7:05 – Hershey Bears at Phantoms
– Service Electric Phantoms Ballcap Night
– Saturday Night Hockey Live featuring Billy Bauer in our season-long concert series.
The Phantoms tangle with the Hershey Bears (8-6-3), AHL affiliate of the Washington Capitals. Lehigh Valley took the most recent meeting with a 4-1 win at Giant Center on Nvember 10 in a game that saw the Phantoms score two shorthanded goals on the SAME Hershey power play as part of a four-goal explosion in the second period. Joe Snively leads the Chocolate and White with 7-10-17.

Notes and Standouts
— Newcomers Nick Lappin, Nick Master and Jon Gillies all made their Phantoms’ debuts over the weekend. Master is a Broomall, Pa. native who went to Philadelphia Phantoms games when he was a kid!
— Jackson Cates is on a three-game assist streak.
— Morgan Frost and Connor Bunnaman have joined Max Willman on recalls to the Philadelphia Flyers. Congrats to all!!
— Max Willman has scored in six of his last seven games with the Phantoms and has a three-game goal streak but was recently recalled back up to Philadelphia 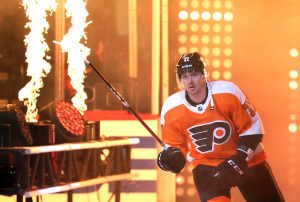