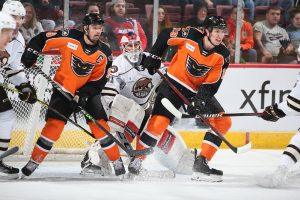 Friday, Nov. 12:
Providence Bruins 6 – Phantoms 3
Garrett Wilson had a “Gordie Howe Hat Trick” with a goal, an assist and a fight in the same game but it wasn’t enough to overcome the potent Bruins’ attack at Dunkin’ Donuts Center in Providence, R.I. Zach Senyshyn had three goals and an assist to lead Providence. Gerry Mayhew and Brennan Saulnier also scored for the Phantoms in a feisty game that had four fights.

Saturday, November 13:
Springfield Thunderbirds 2 – Phantoms 1 (OT)
The Phantoms went toe-to-toe with the top team in the Atlantic Division and earned a standings point but ultimately fell in extra time on Hugh McGing’s 3-on-3 goal. Max Willman scored shorthanded from Morgan Frost in the second period for the team’s league-leading fifth shortie of the season. Felix Sandstrom had 28 saves and the Phantoms’ penalty kill held the high-flying T-Birds to 0-for-5 on the power play. It was the first time this season that Springfield had scored only one goal in regulation.

Upcoming
Wednesday, Novemer 17, 7:05 – Charlotte Checkers at Phantoms (PPL Center)
– MILITARY APPRECIATION NIGHT
It’s Military Appreciation Night presented by Netizen with military acknowledgements throughout the game in support of our area active military and veterans. The Phantoms are 1-1-0 against the Checkers who are the AHL affiliation of the Florida Panthers and Seattle Kraken. Phantoms’ alum Carsen Twarynski returns to PPL Center with his new team after previously playing in 107 games with the Phantoms scoring 18 goals. He also played in 22 games with the Philadelphia Flyers. 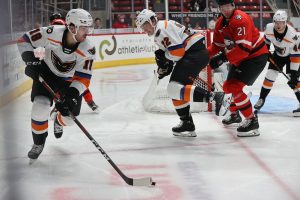 Friday, November 19, 7:05 – Phantoms at Rochester Americans
The Phantoms open a three-game road-swing with a clash at the AHL affiliate of the Buffalo Sabres. The Amerks are 7-4-0 and trailing only first-place and unbeaten Utica. Rochester is led by 20-year-old Jack Quinn who has scored 9-7-16. The #8 overall selection in the 2020 NHL Entry Draft is now tops in scoring among all active AHL rookies.

Saturday, November 20, 4:00 – Phantoms at Toronto Marlies
The Phantoms head north of the border for a Saturday afternoon contest against the top affiliate of the Toronto Maple Leafs who are 7-4-0 and tied with Rochester for second-place in the North Division. Former Islanders’ first-rounder Josh Ho-Sang has found new life in his fresh start with another organization and leads active Marlies players in scoring at 6-2-8. The Phantoms have not traveled to Canada in over two years since a 4-2 win at the Toronto Marlies on January 5, 2020. The trip will represent a homecoming for several Toronto-area and Ontario-born players on the Phantoms including Morgan Frost, Matt Strome, Isaac Ratcliffe, Connor Bunnaman, Garrett Wilson and Cal O’Reilly

Notes and Standouts
— The Phantoms lead the AHL with five shorthanded goals. Max Willman and Jackson Cates are tied for the AHL lead in shorties with two each.
— Max Willman has goals in four of the last five games and is tied for the team lead with Gerry Mayhew (6)
— Morgan Frost has a four-game point streak and has nine points in the last seven games.
— Felix Sandstrom has started in net in six of the last seven games for Lehigh Valley.
— Three of Lehigh Valley’s five home games this year have gone to overtime.

Schedule Change
The Phantoms have announced a schedule change tht will help fans celebrate a HOCKEY NEW YEAR at PPL Center.
Come join us on January 1 at 6:05 p.m. for the Lehgh Valley Phantoms vs. Bridgeport Islanders.
The game was originally schedule for Feburary 5.