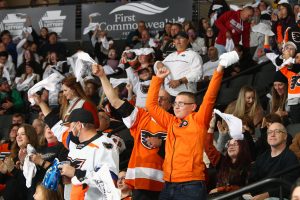 Weekly Recap
Saturday, October 23: Hartford 3 – Phantoms 1
Before a raucous, Whiteout, rally-towel waving crowd on Opening Night, Max Willman scored on a shorthanded breakaway in his first game from the Flyers but the Wolf Pack ralled for the comeback win including an empty-netter at the end. Fights from Brennan Saulnier and Garrett Wilson ignited the PPL Center contingent hosting its first large crowd at a hockey game in 594 days.

Sunday, October 24: Wilkes-Barre/Scranton 2 – Phantoms 1 (OT)
Max Willman dramatically scored 6-on-5 in the closing minute of regulation to force overtime but the Penguins emerged with the bonus point in the 3-on-3 period. Rookie Sam Ersson was very strong in his PPL Center debut with 28 saves on 30 shots.

Upcoming
Wednesday, October 27 – Phantoms at Wilkes-Barre/Scrant0n Penguins
The Keystone State foes meet for Round 3 out of 12 in their rivalry series. 7 of the last 10 meetings between the Phantoms and Penguins have gone to overtime including 6 out of 8 last year. 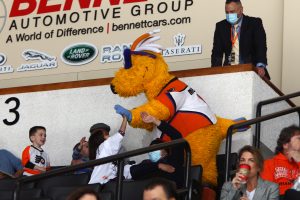 Friday, October 29 – Phantoms at Utica Comets
The Phantoms travel to Utica, New York for its first hotel stay since February, 2020. The Comets are the AHL affiliate of the New Jersey Devils. Lehigh Valley was 8-1-4 against New Jersey’s previous affiliate, the Binghamton Devils, in the 2020-21 season. Utica is in first place in the North Division with a 3-0-0 start.

Saturday, October 30 – Phantoms vs. Syracuse Crunch
The Phantoms return to PPL Center for the debut of “Saturday Nigth Hockey Live” featuring a live performance by Kendal Conras at the second intermission. The Crunch are the AHL affiliate of the Tampa Bay Lightning and enter the week with a record of 1-2-1.

Notes and Standouts
— Max Willman has scored goals in back-to-back games since his return to the Phantoms from the Philadelphia Flyers. Willman became the 32nd Lehigh Valley Phantoms player to receive a recall for an NHL debut with Philadelphia.
— Swedish goaltending tandem Felix Sandstrom and Sam Ersson have a combined goals-against average of 2.05 and a combined save percentage of .931
— Lehigh Valley’s penalty kill rates 5th out of 31 in the AHL at 92.3% (12-for-13) 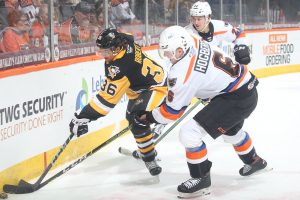 The Phantoms return to PPL Center this Saturday, October 30 taking on the Syracuse Crunch in the debut of “Saturday Night Hockey Live.” Kendal Conrad will be performing at the second intermission.
Tickets for all Phantoms home games are available HERE