Lehigh Valley, PA – The Lehigh Valley Phantoms return to PPL Center as they open the month of March with a three-game homestand this week against the Providence Bruins and Charlotte Checkers. With less than two months to go in the regular season, the Phantoms have 28 games remaining. 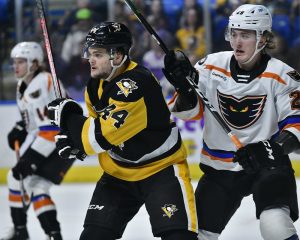 Wednesday, February 23, 2022
Phantoms 3 – Wilkes-Barre/Scranton Penguins 2 (SO)
Adam Clendening scored the lone shootout goal as the Phantoms picked up an important win at the rival Penguins to open their three-game road swing. Trailing 2-0 after one period, the Phantoms successfully rallied on goals by Maksim Sushko and Hayden Hodgson. Kirill Ustimenko was terrific with 30 saves on 32 shots and then stopped all three Penguins’ shootout tries for his first AHL win of the season.

Friday, February 25, 2022
Cleveland Monsters 2 – Phantoms 1 (OT)
Charlie Gerard scored in his first-ever pro game back in his hometown in front of dozens of friends and family cheering him on. But the Cleveland Monsters prevailed in overtime on Trex Fix-Wolansky’s rebound goal from his belly just seconds after the extra period had started. Kirill Ustimenko made 18 saves on 20 shots to earn the Phantoms a valuable standings point while the Phantoms had only 19 shots in the choppy game at Rocket Mortgage Fieldhouse.

Saturday, Feburary 26, 2022
Cleveland Monsters 2 – Phantoms 1
The Phantoms dropped a 2-1 decision in Northeast Ohio for the second day in a row but this time fell in regulation. Justin Scott scored for Cleveland for the second consecutive game. Wyatte Wylie tallied from the point for the Phantoms on a goal that almost appeared like it had been tipped by Hayden Hodgson at the net-front. Pat Nagle played his first game for the Phantoms in almost a month and made 35 saves on 37 shots to keep the Phantoms in the game. It was Nagle’s first regulation loss of the season as his record fell to 7-1-3. 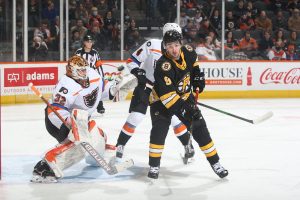 Upcoming
Wednesday, March 2, 2022 (7:05) – Phantoms vs. Providence Bruins
Lehigh Valley (18-20-10) opens a three-game homestand against second-place Providence (24-14-6). Lehigh Valley is 1-1-0 against against the Bruins. Zach Senyshyn leads the P-Bruins with 14 goals and had a hat trick against the Phantoms in November. Lehigh Valley won the most recent encounter on February 5 in a 5-1 blowout with Hayden Hodgson scoring a pair of goals.

Friday, March 4, 2022 (7:05) – Phantoms vs. Charlotte Checkers
Saturday, March 5, 2022 (7:05) – Phantoms vs. Charlotte Checkers
The Checkers come to town for a pair of weekend games as the Phantoms celebrate their 25th Anniversary as a franchise. Charlotte (26-21-3) is in fifth-place in the Atlantic Division. The AHL affiliate of the Florida Panthers AND Seattle Kraken is one of the highest scoring teams in the AHL at 3.36 goals-per-game placing them sixth in the league and third in the conference. The Phantoms are 2-4-0 against the Charlotte Checkers. Kole Lind has gone up to Seattle after leading the team in scoring to this point of the season with 16-17-33. Florida third-rounder Logan Hutsko, out of Boston College, is having a great rookie season scoring 9-23-32 to lead active Checkers’ scorers. 20-year-old goalie and highly touted first-rounder Spencer Knight is down from Florida and has gone 5-3-0, 2.91, .901 since arriving. 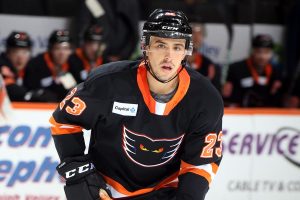 Frost Returns:
Morgan Frost has returned to the Phantoms from the Philadelphia Flyers providing the 2019 first-rounder an opportunity to log big minutes. He has played 20 games with the Phantoms this season scoring 5-13-18 while also suiting up in 30 games with the Flyers scoring 2-5-7. Frost’s most recent game with the Phantoms on February 13 saw him score the decivie goal with just 4:17 left to break a 1-1 tie against Hershey in an eventual 3-2 win.

Additional Trnsactions:
Goalie Pat Nagle has returned to the Phantoms from his adventures with the USA Olympics Team in Beijing, China.
Goalie Garrett Metcalf has been released from his PTO (Professional Try Out) contract.
Defenseman Ryan MacKinnon has been loaned by the Phantoms to the Reading Royals of the ECHL.

News and Notes:
– Lehigh Valley went 1-1-1 on its recent three-game road-trip.
– Lehigh Valley has gone 15-9-5 in its last 29 games after a beginning that saw just three wins in the first 19 games at 3-11-5.
– KILLING IT! The Phantoms’ penalty kill rates fifth in the AHL and first in the conference at 83.9%.
The Phantoms are at an even stronger 87.5% (70/80) in their last 26 games since December 18
– The Phantoms have played 48 games and have 28 remaining with less than two months to go in the 2021-22 regular season.
– Hayden Hodgson leads the Phantoms with 15 goals and has three goals in the last six games as well as 9 goals in the last 17 games.
– The Phantoms are tied for the second-most overtime games in the AHL with 14. The Phantoms have gone to overtime in three of their last five games.