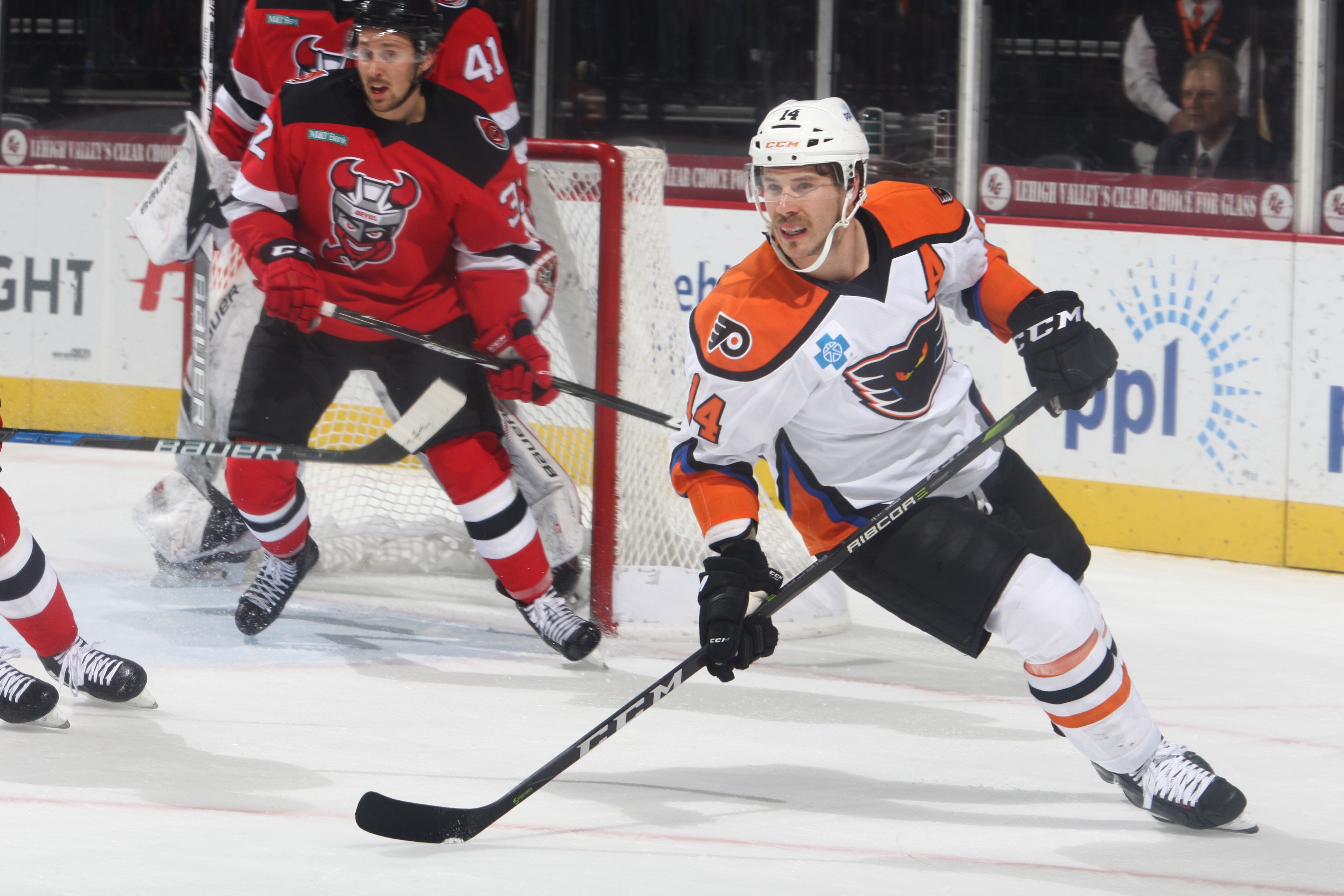 Lehigh Valley, PA – Most teams have found it nearly impossible to contain the high-flying offense of the Lehigh Valley Phantoms who ranked second in the AHL at 3.65 goals per game after leading the circuit in total offense a season ago. But the Binghamton Devils somehow found a successful formula, at least for one night, in a 3-0 win at PPL Center on Wednesday.

The game was a mostly clogged up scoreless duel between goaltenders Ken Appleby and Alex Lyon almost to the second intermission and was the latest 0-0 game the Phantoms had been involved in this year. Finally Jacob MacDonald capped a 3-on-2 rush with just 29.2 seconds left in the second period to put the visitors on the board. Kevin Rooney paced the Devils attack with a goal and an assist while Appleby led the way with his 25-save shutout, the second blank sheet of his AHL career.

But it was really the Devils defense who got the job done against the Phantoms with a style that stymied Lehigh Valley’s high-scoring offensive attack that had put up 11 goals in just the past two games. This game was in sharp contract to the last meeting between the two teams in which the Phantoms won a wild, offensive affair 6-5 in upstate New York on November 4.

“We were a little stubborn,” said Phantoms center Phil Varone. “(Binghamton) played well and were clogging up the middle. They were good on the bluelines. We need to get pucks in deep and not turn it over in the neutral zone.”

Greg Carey’s three-game goal streak came to a close and not even the return of the AHL’s leading goal-scorer, Danick Martel, could break through against the stingy Devils defensive style. Lehigh Valley’s two-game win streak came to an end as the Phantoms moved to 1-1-0 on their season-long six-game homestand. It was Binghamton’s first victory against the Phantoms in three tries. The away team has won in every game of the Phantoms vs. Devils season series. 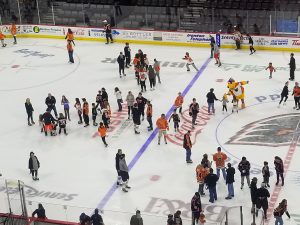 After the contest came the Postgame Open Skate with the Phantoms players in another great Phan Interaction Opportunity that has become the hallmark of the Lehigh Valley Phantoms in their four seasons in downtown Allentown. Despite the disappointment of a loss in front of their home fans, the players emerged from the locker room with plenty of smiles for the kids and adults who greeted the team for the enjoyable event.

The Phantoms almost struck in the second period shortly after a power play. Rushing into the zone was Matt Read up the left wing who connected cross-ice with Chris Conner who immediately spotted Mike Vecchione stationed on the backdoor. But the try from the left of the cage for Vecchione just missed high over the crossbar past a diving and scrambling Appleby and with that shot sailing away so went the Phantoms best chance to take the initial lead.

The Phantoms had another rush that ended up coming back the other way in the form of a 2-on-1 that turned into a 3-on-2. Defenseman Jacob McDonald trailing on the play received Rooney’s pass in the high slot and wristed hiss seventh of the season between the skates of Alex Lyon in the closing minute of the second period for a 1-0 lead at the second intermission.

The Phantoms boast a league-leading three comeback wins when trailing at the second intermission one of which came against the Binghamton Devils but this time it wasn’t to be.

“You’re not going to score five goals every game,” Varone said. “It’s sometimes good to have tight games like this. Even though we lost I think it’s good to get one of these out of the way early in the season so we can learn from something like this.” 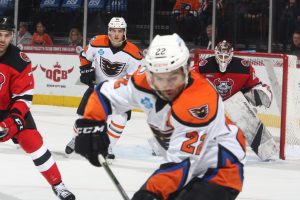 A Lehigh Valley power play in the third period came back to bite them when Kevin Rooney’s flip towards the cage from behind the net was somehow knocked into the goal by Alex Lyon on a weird bounce that served as just the second shorthanded goal surrendered by the Phantoms this season. And suddenly the Phantoms were down 2-0 with 14:30 remaining.

Just moments later came a wide-open breakaway for first-round talent John Quenneville but he was stuffed off the right pad by Lyon on a dazzling denial to keep the Phantoms around.

Lehigh Valley was pinching and taking bigger chances in a riskier but necessary push when trailing late in the game. But Binghamton countered with a breakaway for Joe Blandisi who moved towards Lyon’s blocker side before flipping in the final tally just past the glove with 3:29 remaining to provide for the 3-0 final.

It was the first time the Phantoms had been shut out on home ice and just the second tie overall gong way back to the third game of the season on October 13th at Wilkes-Barre/Scranton when Casey DeSmith turned the trick. 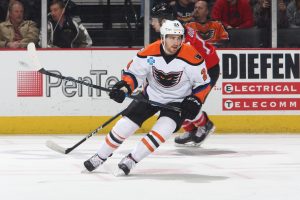 The Phantoms return to PPL Center on Friday to defend the universe against the evil Bears from ChocolateTown as part of SuperHero night featuring Batman, Wonder Woman, Spiderman and Captain America among others. The homestand continues on Saturday against the Laval Rocket featuring the annual Teddy Bear Toss, presented by Dan’s Camera City, to benefit the kids at Valley Youth House. Be sure to bring your stuffed animal donations…and your throwing arms!
Secure your tickets at PPLCenter.com or by calling (610) 347-TIXX (8499).