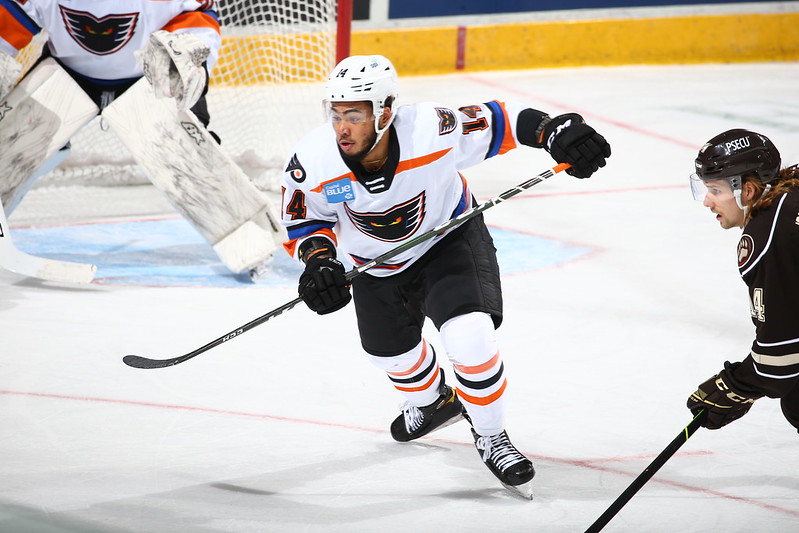 Hershey, PA – At only 18 years old, Zayde Wisdom has shown wisdom beyond his years. The youngest player in franchise history scored his first two professional goals and then assisted on the overtime winner for David Kase in a wild 5-4 victory at the Hershey Bears in a Sunday afternoon Valentine’s Day clash.

Lehigh Valley (2-0-1) played its third consecutive overtime game to begin the season, a first in franchise history. And the Phantoms made a second straight comeback in the third period in games at Hershey.

Zayde Wisdom and David Kase both posted three-point efforts in the highest scoring game of the season. Wisdom with two goals and one assist while Kase tallied a pair of helpers along with his overtime winner. Defenseman Logan Day had a two-point afternoon with a goal and an assist. 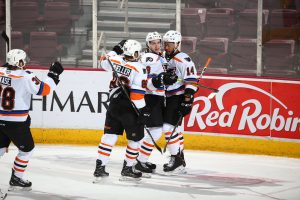 Both teams traded three-goal surges in the see-saw affair with the Bears striking just 16 seconds into the game to seize the opening lead only to see the Phantoms score the next three goals to take a 3-1 lead early in the second. Hershey rallied back with three consecutive goals to take a 4-3 lead in the third before Wisdom would even the game at 4-4 with his second goal of the night before setting up Kase for the winner in overtime just moments after Wisdom almost scored the overtime winner himself for what would have been a hat trick.

On top of the nine total goals scored in the game came at least seven other shots that went off the posts. Max Willman found the iron twice in the first period alone. 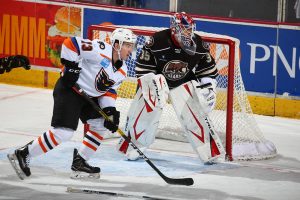 Joe Snively rifled a shot off the iron and into the net just 16 seconds into the game for a 1-0 lead for the Bears. Snively was flying up the left boards after receiving a long stretch pass across the ice from former Phantoms defenseman Reece Willcox to set up the goal.

But the Phantoms responded with a big blast by defenseman Logan Day that beat goalie Ilya Samsonov who had just come down to Hershey from the Washington Capitals for his first game in almost a month. Day’s goal came on a nifty set up by Kase with Garrett Wilson recording the secondary assist.

Late in the first period, Chris Mueller in front of the net nudged the puck over to Wisdom on the left of the cage who lifted a backhander into the mostly open net for his first career professional goal. Kase recorded his second point of the game on the play at 19:35 into the first that propelled the Phantoms to a 2-1 lead at the first intermission.

Lehigh Valley was dominating to begin the second period and Matt Strome gave the Phantoms a 3-1 lead on a nice flip across the slot by Logan Day threading a pass between a couple Bears defenders and turning down his own opportunity to shoot. Ralph Cuddemi also assisted on the play sparking the rush up the left-wing boards and the Phantoms were looking very strong with a 3-1 advantage.

Hershey (1-0-2) found its stride around the midway mark of the game. After registering no shots on goal in the first nine minutes of the second period, the Bears generated more significant threats  against Phantoms netminder Zane McIntyre as they rallied to equalize and eventually take the lead. 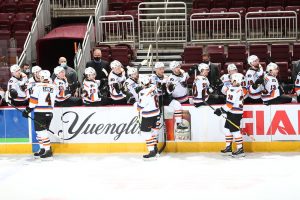 Cameron Schilling’s big blast from the high slot at 13:02 of the third was followed just three minutes later by Mike Sgarbossa aiming from between the circles to an opening over the right pad of goalie Zane McIntyre to tie the game at 3-3 into the second break.

Defenseman Rob O’Gara chased after a puck up the right-wing boards and took advantage of a little bank to throw a backhander at the net that beat McIntyre past the stick side and off the far post and in at 5:22 into the third for a 4-3 lead for the Bears.

Lehigh Valley stayed with it and Wisdom picked up his second goal while pursing a lobbed puck by Tyler Wotherspoon that was mishandled by a Hershey defenseman. Wisdom pounced on the opportunity to snipe top shelf from the right circle with just 5:16 remaining to forge a 4-4 deadlock.

The Phantoms prevailed in overtime with David Kase and Zayde Wisdom working into the high slot. Kase’s blast went off the post and briefly sat in the blue paint behind the Bears goalie, Samsonov, with Wisdom coming tantalizingly close to scoring the winner. Instead, he was the first to the puck behind the net and left it out in front perfectly for Kase to slam the deciding goal into the back of the net in the wild 5-4 final. It is the first overtime goal in North America for the third-year pro from the Czech Republic and it was Kase’s second goal in the last two games.

Hershey out shot the Phantoms 36-29. Zane McIntyre recorded 32 saves in the win while Ilya Samsonov had 21 denials in the overtime loss. Lehigh Valley 0-for-3 on the power play while holding the Bears to 0-for-2. The Phantoms penalty kill has been perfect through three games this season at 8-for-8.

The Phantoms travel to Newark, NJ for a Friday night game against the Binghamton Devils and then will play their home opener at PPL Center on Saturday, February 20 at 7:05 p.m. against Binghamton.