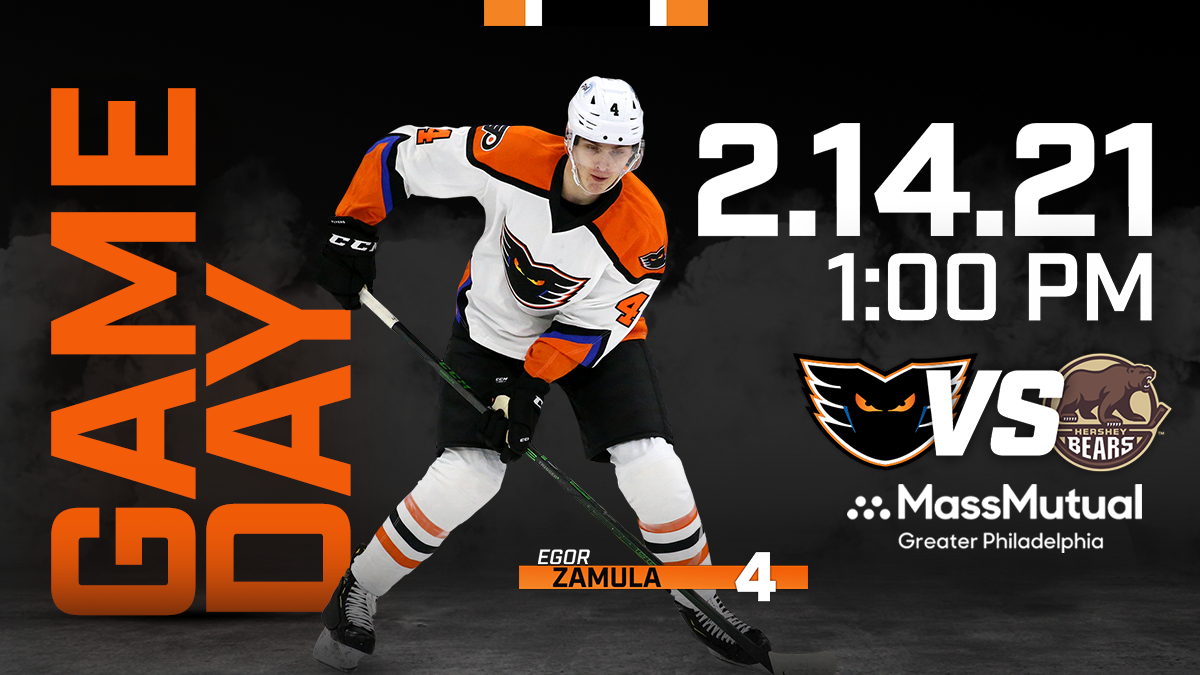 Today’s Game – The Lehigh Valley Phantoms travel to Giant Center in Hershey for Game 2 out of 14 in the season-rivalry series against the Bears. Lehigh Valley rallied for a dramatic 2-1 overtime win at Hershey in the season opener on Saturday, February 6.

Last Time Out – The Phantoms took the early lead against Binghamton but ultimately lost in Newark, N.J. in their second consecutive overtime decision. David Kase scored shorthanded in the first period assisted by Max Willman and Tyler Wotherspoon. Ben Thomson equalized for the Devils in the opening minutes of the third. Brett Seney won the game in the first few seconds of overtime. Lehigh Valley had three consecutive power plays in the last 11 minutes of regulation but were unable to capitalize.
Hershey is coming off its first win of the season in a 3-2 victory at Wilkes-Barre on Thursday night. 37-year-old captain Matt Moulson scored his first of the year. Capitals 2019 first-rounder Connor McMichael broke a 2-2 deadlock with 11:04 remaining in the third with his first career professional goal.

What a Comeback – The Lehigh Valley Phantoms rallied from behind in their season opener last Saturday afternoon at Hershey. It took over 59 minutes for the team to score its first goal of the season on Scott Gordon’s birthday but rookie defenseman Wyatte Wylie finally came through with just 44.7 seconds remaining with a big slapshot to forge a 1-1 tie. Former Providence Bruin Ryan Fitzgerald made the most of his Phantoms debut rifling home the winner in overtime. Zane McIntyre was tremendous with 34 saves on 35 shots to keep the Phantoms within striking distance and give the team the chance for the big comeback.

Extra Hockey – The Phantoms have gone to overtime in the first two games of the season for only the second time in franchise history. In October 2013, the Adirondack Phantoms opened the season with a 4-3 overtime win at Hershey and then posted a 5-4 shootout shootout at Hartford.

Hot Start – The Phantoms have points in each of their first two games of the season for the first time since the inaugural season of the Lehigh Valley Phantoms who started 2-0-0 in October 2014. The record for consecutive standings points to start a season for the Phantoms was a 5-0-0 start by the Philadelphia Phantoms in the 2007-08 season.

Hey, We Know You! – Hershey defenseman Reece Willcox is playing for an AHL team that is NOT the Phantoms for the first time in his career. The former Cornell University was a mainstay on the Phantoms blue-line and rates fourth in Lehigh Valley history with 231 games played which is also tops among all Lehigh Valley Phantoms defensemen.

Scouting the Bears – Connor McMichael was the Capitals first-round selection in 2019. The 20-year-old scored 47 goals and 55 assists with the London Knights in the Ontario Hockey League last year. Garrett Pilon racked up 18 goals for the Bears in his second pro season. He’s the son of former NHL’er Rich Pilon (NY Islanders, NY Rangers, St. Louis). 21-year-old Riley Sutter is the son of long-time Philadelphia Flyer Ron Sutter (and nephew of Rich Sutter) who wore the orange and black from 1983-91. Ron Sutter was teammates with Phantoms assistant coach Kerry Huffman.
Defenseman Martin Fehervary has come down for the Capitals Taxi Squad to play a couple of Bears games. Veteran goalie Pheonix Copley has started both games for Hershey.

Dinged Up – Tyson Foerster and Tanner Laczynski are on the shelf with injuries from the Saturday, February 6 game at Hershey. Forwards Isaac Ratcliffe and Wade Allison had surgeries and continue to rehab at the Flyers training facility in Voorhees. Goalie Kirill Ustimenko required hip surgery while playing in Belarus last fall and is out for the season.

Wisdom in Youth – Zayde Wisdom became the youngest player in Phantoms franchise history if he plays in today’s game. The fourth-round selection of the Flyers in 2020 from the Kingston Frontenacs is 18 years and 6 months and 30 days old. That makes him 20 days younger than Derek Mathers when he debuted for the Adirondack Phantoms in March, 2012. He became the fourth 18-year-old in Phantoms franchise history (Derek Mathers, Nick Cousins and Scott Laughton) and the first-ever with Lehigh Valley.

Upcoming – The Phantoms travel to Newark, NJ for a Friday night clash with the Binghamton Devils and then the teams will rematch on Saturday night at PPL Center in the home opener for Lehigh Valley. 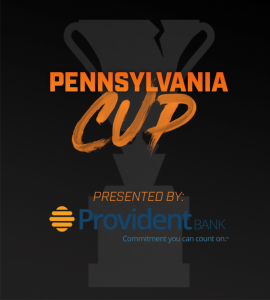 Upcoming in the Pennsylvania Cup:
Feb 14: Phantoms at Bears

(Games between the Pennsylvania teams qualify)