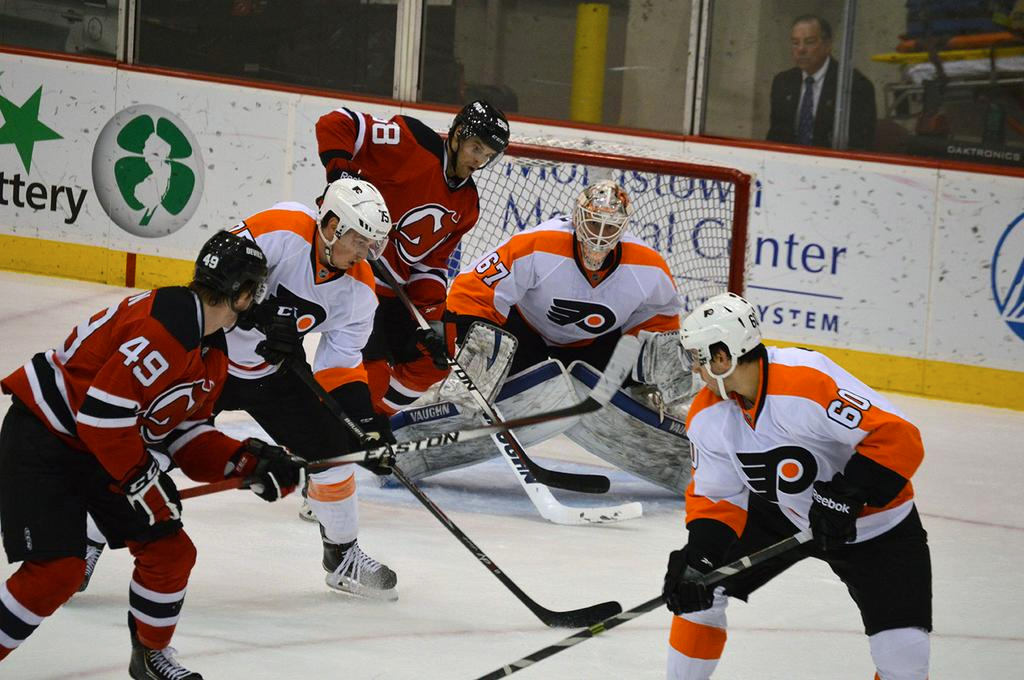 Phantoms Triumph 4-2 vs. Devils in Newark

Newark, NJ – The Lehigh Valley Phantoms, proud affiliate of the Philadelphia Flyers, took down the host Albany Devils 4-2 in an American Hockey League preseason contest on Tuesday afternoon. Taylor Leier scored a pair of goals for Lehigh Valley while Shayne Gostisbehere and Petr Straka also registered tallies. Connor Knapp played in goal for the Phantoms the opening 30 minutes of the game and then Martin Ouellette entered in the middle of the second period to carry the load the rest of the way.

The game was a closed-door session held at the New Jersey Devils’ practice-rink inside their home arena, the Prudential Center. While the building was mostly empty, several Flyers front-office personnel were in attendance to get a look at their team’s prospects in game-action.

Taylor Leier opened and closed the scoring in the afternoon contest. He registered a power-play strike from the right circle at 7:17 into the first period to give the Phantoms a 1-0 lead. And he finished the day with an empty-netter from the opposite side of the red-line along the bench with just 15 seconds left to seal the win. Leier actually was very close to scoring another but after he celebrated what he thought was a top-shelf strike in the third period, he found out the goal-judge and referee had not ruled the play to be a goal.

Former Wilkes-Barre/Scranton Penguin Paul Thompson scored on the power play at the 16-minute mark for the Devils to even the score 1-1 at the first break.

But Petr Straka’s unassisted lamplighter 7:38 into the second would give the Phantoms the lead for good. Straka also had a goal and an assist for Philadelphia in the team’s Rookie Game win vs. Washington last week. And he was less than 24 hours removed from playing in a Philadelphia preseason game in which he was paired on the same line as NHL veterans Vincent Lecavalier and R.J. Umberger.

Shayne Gostisbehere extended the Phantoms’ advantage to 3-1 late in the second period with a slapshot rocket from the right point that rattled perfectly off the inside of the post and in beating Devils’ goalie Maxime Clermont. Gostisbehere, like Straka, was also less than a day removed from having played in Philadelphia the night before.

The Devils increased their attack late in the third period and eventually would pull to within one with 3:55 remaining on a goal by Ben Johnson. Albany finished the game with a power-play and pulled goalie for a 6-on-4 advantage in their efforts to equalize but the Phantoms held strong thanks in part to a pair of nice stops by Martin Ouellette followed in short order by Leier’s long-distance empty-netter.

The Phantoms out-shot the Devils 30-23. Lehigh Valley finished 1-for-4 on the power play while Albany ended up 1 for 5.

Up next, the Lehigh Valley Phantoms welcome the Philadelphia Flyers for the “Battle on Hamilton” in the official hockey debut at PPL Center. The historic contest is Saturday evening at 5:00 pm. To purchase tickets please visit the PPL Center Box Office at 701 Hamilton Street, call 610-347-TIXX (8499) or log on to pplcenter.com/tickets.

The Phantoms will also play a pair of preseason home games on Wednesday, October 1 and Saturday, October 4 with the Hershey Bears and Albany Devils paying visits to Lehigh Valley.

Opening Night for the inaugural regular season of Lehigh Valley Phantoms hockey at the spectacular, new PPL Center is Friday, October 17 against the Adirondack Flames!