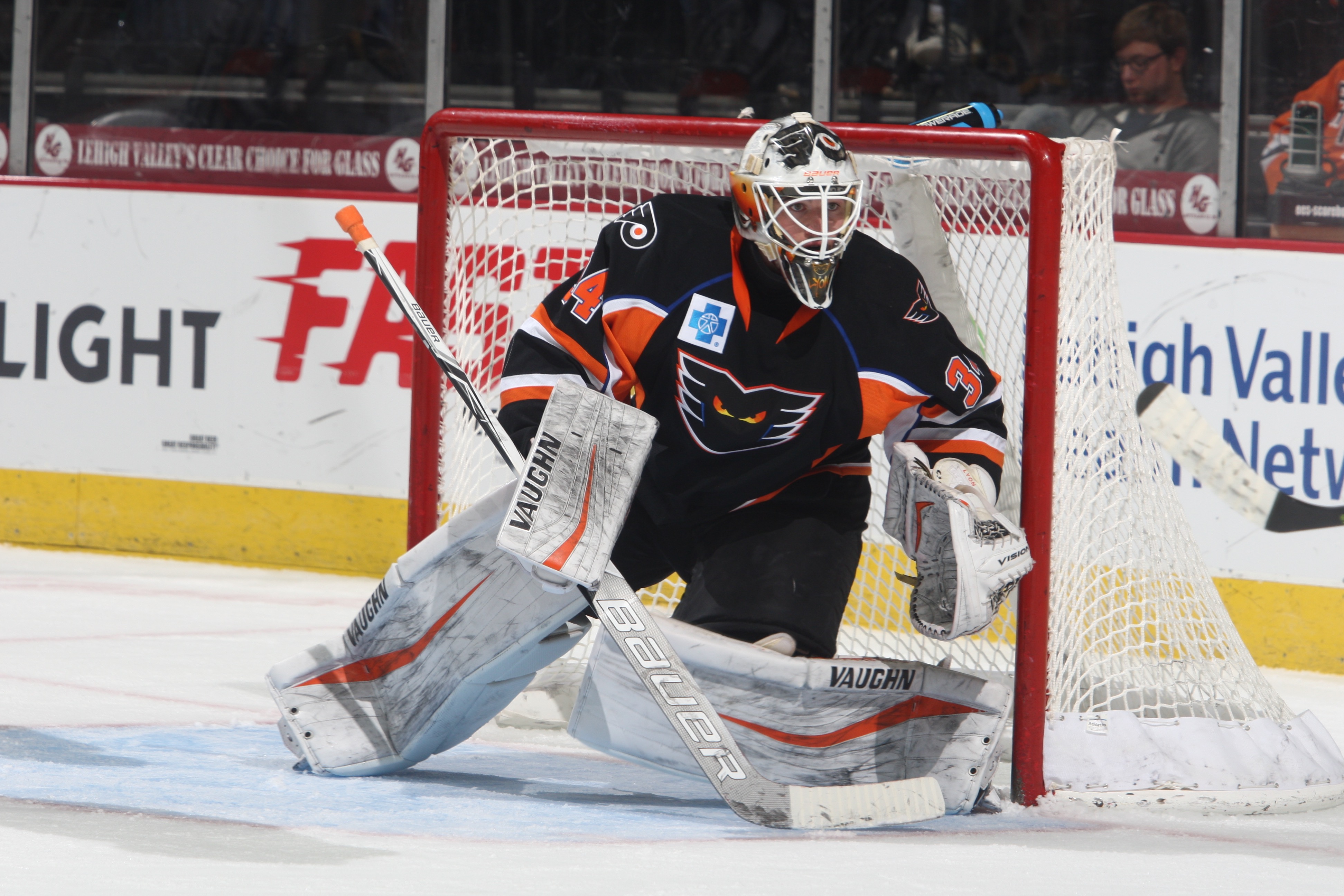 Lehigh Valley Vaults Into 2nd with 4th Win in Last 5

Lehigh Valley, PA – Alex Lyon turned aside 30 shots and the Lehigh Valley Phantoms withstood a furious Providence Bruins rally at the end to post a 3-2 win on Wednesday night at PPL Center. Leading 3-0 with a couple minutes to go, the visiting Bruins notched a pair of extra-attacker goals to force the Phantoms to sweat it out 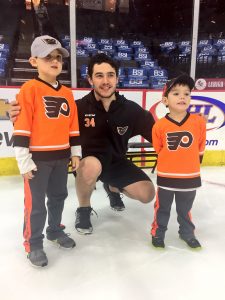 Alex Krushelnyski (3rd), Greg Carey (18th) and Mike Vecchione (9th) all registered goals for the Phantoms in the team’s 25th win of the season which also was their fourth in their last five. Lehigh Valley vaulted past Providence for second place in the Atlantic Division heading into another Top Two Showdown with the first-place Wilkes-Barre/Scranton Penguins on Friday night in downtown Allentown.

After the victorty, fans filed their way down to the ice to congratulate their favorite players during the Post-Game Photograph event which is always one of the most popular fan interaction opportunities of the season.

Wednesday’s game marked the return of defenseman Travis Sanheim to Lehigh Valley’s lineup after spending the first half of the season with the Philadelphia Flyers. A first-round selection (#17 overall) by Philadelphia in the 2014 NHL Entry Draft, Sanheim tallied one goal, four assists and five points across 35 games with the Flyers this year after appearing in all 76 games with the Phantoms a season ago where he compiled 10 goals, 27 assists and 37 total points.

“I’ve just got to make adjustments and try and get better every day,” Sanheim said. “I thought tonight I made some pretty good plays. I hung onto the puck maybe a little bit longer than normal. I had a little more time so I was able to make some better plays, but overall, I was just trying to play my game and keep it simple, especially with it being my first game in a while.” 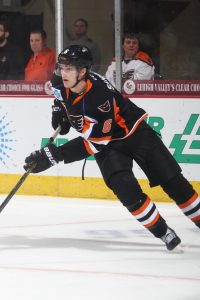 The contest began with Alex Lyon and Providence’s Zane McIntyre shutting down fantastic opportunities at both ends of the ice. Breakaways, odd-man rushes and bad turnovers resulted in both squads threatening early. Lyon made a spectacular save on a backdoor opportunity by flashing the right pad quickly for the early kick stop. And moments later it was McIntyre with a tremendous, lunging glove save who would deny Steven Swavely on the right of the cage. Lyon turned the trick again with a pair of rapid-fire denials on the doorstep including a left-leg save on Ryan Fitzgerald’s point-blank chance.

The Phantoms opened the scoring less than six minutes into the first period when a right wing shot by Colin McDonald glanced off the post producing a rebound atop the goal crease that was promptly gathered by Krushelnyski and expertly lifted into the top of the net for his third goal of the season. McDonald and Will O’Neill collected assists on the even-strength strike netted 5:59 into the opening frame. Krushelnyski has notched tallies in consecutive games. McIntyre entered the evening riding the wave of back-to-back shutouts which earned him AHL Player of the Week honors. But Krushelnyski’s lamplighter served as an early momentum boost and tone-setter for the Phantoms.

Lehigh Valley then doubled its lead less than six minutes later when Maxim Lamarche’s pass from the slot changed direction off Carey’s skate at the side of the cage before rolling across the goal line for Carey’s team-leading 18th goal of the year. Lamarche and Nic Aube-Kubel assisted on the five-on-five conversion tallied 11:50 into the first period. 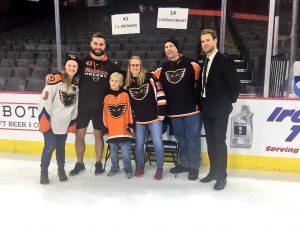 The Phantoms preserved their 2-0 lead through the middle frame with Alex Lyon turning away another 13 Providence shots.

Lehigh Valley extended its lead to a 3-0 advantage just prior to the midway point of the third period when a beautiful pass by Chris Conner from behind the Providence net found Vecchione inside the right dot who promptly blasted home his ninth conversion of the year. Lamarche garnered the secondary assist marking his first multi-assist game of the season and his second ever with the Phantoms. At 9:08 into the third, the Phantoms had boosted their lead to 3-0.

Providence pulled their goalie with over three minutes remaining and began their furious comeback efforts. Kenny Agostino (11th) sniped off the cross bar from the left circle past the right shoulder of his former teammate at Yale University finally breaking Lyon’s shutout bid with just 1:58 remaining.

Travis Sanheim offered a length-of-the-ice drive from behind the Phantoms net that just missed the empty-cage rolling wide to the right. With 40 seconds remaining, the Phantoms thought they had a gimmie on the doorstep of an open-net but Oskar Lindblom was somehow denied by a diving effort from Providence captain Tommy Cross who also blocked a couple of rebound tries to keep the P-Bruins alive.

Shortly after those missed, the Bruins rushed back and converted in quick transition with Jakub Forsbacka-Karlsson (13th) pushing through his shot from the right of the goal. Agostino and Jordan Szwarz also assisted on the play and with just 29 seconds left the Bruins were suddenly within a goal at 3-2. 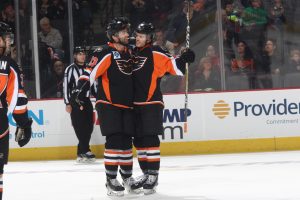 But Providence never seriously threatened in the closing moments and Travis Sanheim mostly ran out the clock holding the puck into the boards in the corner to conclude the victory.

The Phantoms are back in action for a pair of games at PPL Center this weekend. First, on Friday, January 26, Lehigh Valley welcomes the rival and first place Wilkes-Barre/Scranton Penguins to downtown Allentown for a 7:05 p.m. clash. Then, on Saturday, January 27, the Force will be strong with the Phantoms during Star Wars Night at PPL Center when they host the Utica Comets in a 7:05 p.m. showdown. Saturday’s game features a special appearance from the 501st Legion along with a Mini Lightsaber Giveaway free to the first 2,000 kids 14 and under in attendance. A limited number of tickets remain for both games and are available online HERE.