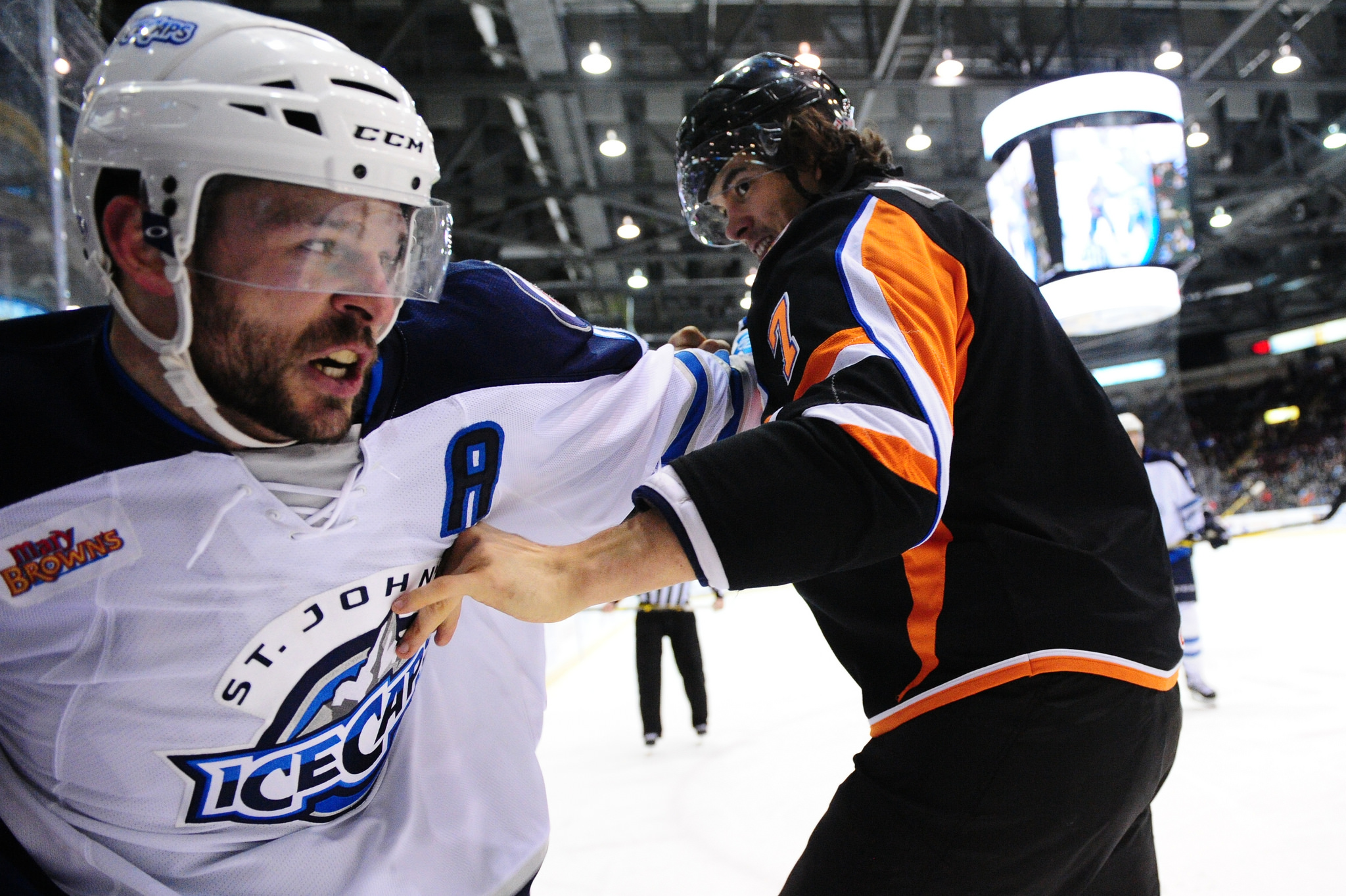 St. John’s, Newfoundland and Labrador, Canada – The Lehigh Valley Phantoms completed a hugely successful five-game road trip with their fourth consecutive victory in a 6-2 blowout of the St. John’s IceCaps on Sunday afternoon. Six different goal scorers led the way for the resurgent Lehigh Valley offense who established a new team-high for lamplighters in a game. The Phantoms poured in 10 goals in the weekend sweep from nine different players in the balanced attack.

Nick Cousins led the way with a three-point effort including one goal and two assists, all in the first period. Oliver Lauridsen registered his first career “Gordie Howe Hat Trick” with a goal, assist and fight while Andrew Gordon scored his second of the weekend against his former team. Other Phantoms lamplighters in the laugher included Steven Delisle, Blair Jones and Jay Rosehill. Veteran Nic Blanchard scored both goals for the defeated St. John’s contingent. Anthony Stolarz turned aside 21 of 23 IceCaps’ drives in his first start of 2015. The scoring surge featured the first goals of the season from big blueliners Steven Delisle and Oliver Lauridsen.

Lehigh Valley’s four-game win streak is their longest of the season and keeps the Phantoms’ record perfect in 2015. The Phantoms have gone 8-2-2 in their last 12 games to spark a rapid ascension up the Eastern Conference Standings while also pushing them closer and closer towards the East Division leading Wilkes-Barre/Scranton Penguins and Hershey Bears. It is the second consecutive road-weekend sweep for the Phantoms who also won back-to-back affairs in Norfolk, Virginia to start the win-streak. 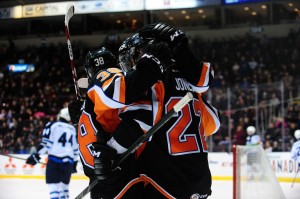 Lehigh Valley is no stranger to the concept of racing out to a 3-0 lead in the first period having turned the trick last month against Binghamton in just the opening 36 seconds. In this contest at St. John’s it took a little under 11 minutes for the Phantoms to reach that comfortable advantage and knock out starting goalie Peter Budaj from the contest.

Andrew Gordon’s team-leading 10th of the year came just 55 seconds into the game on the deflection of an Oliver Lauridsen slapper from the left point. Cousins converted for his ninth at the 7:55 mark from the right-circle on a power-play feed from the left point by Jason Akeson. And just three minutes later it was Steven Delisle sneaking in his first of the season on a drive from the right point that promoted IceCaps head coach Keith McCambridge to make the goalie switch.

Nic Blanchard brought the IceCaps to within a pair early in the second period with a perfect shot from the left circle going high-glove on Stolarz off the underside of the crossbar. St. John’s had the momentum and came perilously close to cutting the gap to single tally but the Phantoms held strong. 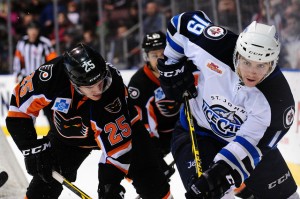 Jason Akeson’s pickoff in front of the blue line setting up a Blair Jones drive to the upper-90 across new goalie Connor Hellebuyck that would regain the momentum for the Phantoms in the form of a 4-1 advantage. Jones’ fifth of the season came at the 13:19 mark of the middle frame while Akeson notched his second assist of the day and ninth of the year.

With two assists in the game, Akeson’s 123 career helpers with the Phantoms moves him into 6th all-time in franchise history ahead of Kirby Law. Akeson now stands at 189 career points with the Phantoms franchise placing him two away from Jared Ross for 6th all-time and just 11 away from becoming only the fifth-ever Phantom to reach the 200-point mark (Peter White, Mark Greig, St. John’s native John Slaney and Kirby Law).

Just a minute after the Jones goal, Kyle MacKinnon for St. John’s took a shot that weirdly bounced off the head of Nic Blanchard and into the goal to close the gap to two once again at 4-2.

But at 17:29 of the second period, Oliver Lauridsen would complete his Gordie Howe Hat Trick with a slapshot from the left point after some good hustle by Austin Fyten to win the puck on the forecheck. 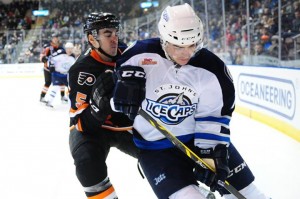 Fyten would set up the last tally of the day as well with his give from the right-wing corner connecting with Jay Rosehill all alone on top of the St. John’s crease for his second of the season at 1:42 of the third period.

In a 10-goal attack over the weekend sweep, Andrew Gordon was the only multi-goal scorer for the Phantoms. The former IceCap had the winning goal with 2:59 remaining in the Saturday night series opener and then scored in the opening minute of the finale. Robert Hagg, Brett Hextall, Ryan White, Nick Cousins, Steven Delisle, Blair Jones, Oliver Lauridsen and Jay Rosehill also had goals in the huge and incredibly balanced weekend offensive outburst.

The Phantoms return to PPL Center next weekend for their first home games of 2015. Lehigh Valley hosts the Albany Devils on Friday, January 16 when the Phantoms will don their brand new orange jerseys for the first time. On Saturday, January 17 it’s Legends Night featuring Bobby Clarke, one of hockey’s all-time greats, when the Phantoms host the Binghamton Senators. Tickets for both games are going quickly and the team anticipates the possibility of securing their eighth and ninth sellouts at PPL Center. Purchase tickets in advance at PPLCenter.com or by calling 610-347-TIXX (8499) or in person at the Mealey’s Furniture Box Office located at the Tim Horton’s entrance of PPL Center.

In their 19th season of operation, the Phantoms are currently in the midst of their Inaugural Season as the Lehigh Valley Phantoms playing at the brand-new PPL Center.  Established in 1996, the Phantoms spent their first 13 seasons at the Spectrum before re-locating to Glens Falls, New York in 2009 where the team spent the next five seasons as the Adirondack Phantoms.  A new era of Phantoms hockey began in the fall of 2014 when the Lehigh Valley Phantoms began play at the state-of-the-art PPL Center.  Through 18 incredibly successful campaigns, the Phantoms have captured two Calder Cup Championships (1998, 2005), two Conference Championships (1998, 2005), two Regular Season Titles (1996-97, 1997-98) and four Division Championships (1996-97, 1997-98, 1998-99, 2003-04).