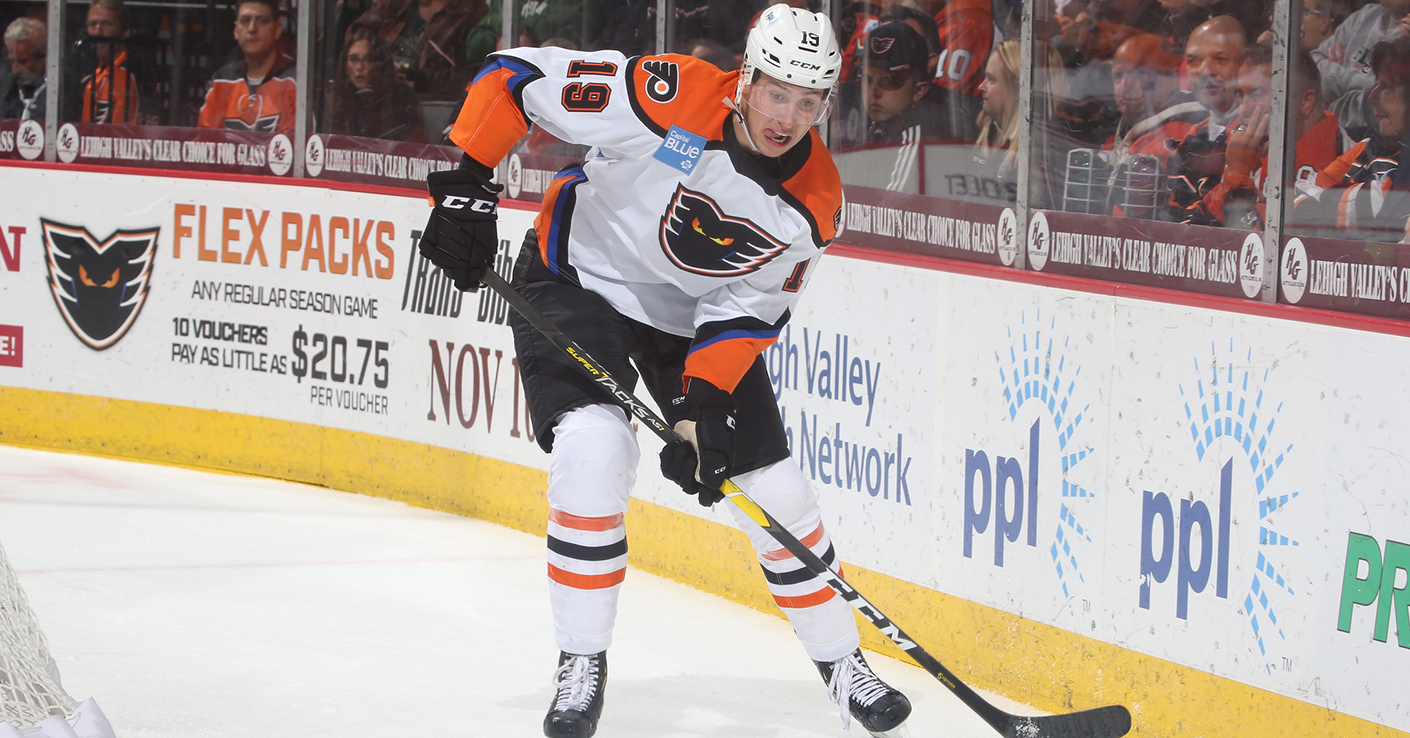 Lehigh Valley, Pa. – The Lehigh Valley Phantoms (2-1-1-1) and the Springfield Thunderbirds (3-4-0-0) gave fans at PPL Center on Saturday night an exciting and intense game that required an extra five minutes plus a shootout to find a winner. The Phantoms scored two goals in the third period to force overtime and earn a point for the fourth consecutive game. Rookie forward Morgan Frost notched his first pro goal while German Rubstov and Nicolas Aube-Kubel also found the back of the net on Saturday night.

The first period of Saturday night’s matchup between the Lehigh Valley Phantoms and Springfield Thunderbirds was a scoreless one but it was still eventful. It was an intense period that saw several scuffles breakout including a fight between Phantoms forward Andy Andreoff and Thunderbirds defenseman Brady Keeper. While the two teams were physical, they also exchanged several quality scoring chances each and totaled 17 shots in the period.

After a scoreless first period, the second period saw four goals scored. Springfield forward Tommy Gross opened the scoring in the game when he beat J-F Berube with a slapshot from the top of the left circle to give the Thunderbirds a 1-0 lead. 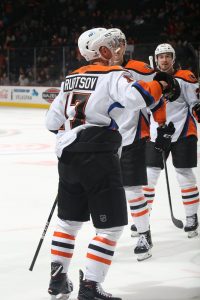 The Phantoms would get an answer back at the 14:26 mark when second-year Phantom German Rubstov scored his first goal of the season, cleaning up in front of the net and putting in a rebound off Thunderbirds goalie Philippe Desrosiers. The primary assist on the play went to Isaac Ratcliffe who got the original shot on net before Rubstov found the rebound.

Springfield would reclaim the lead however just 14 seconds later when Daniel Audette scored to make it a 2-1 lead. The Thunderbirds would add a third goal in the period when forward Anthony Grecord scored on a breakaway to make it a 3-1 lead.

Entering the third period down two goals, the Phantoms upped their intensity in the third period and had several strong scoring chances early in front of Desrosiers but was unable to find the back of the net. At the 8:03 mark of the period, the Phantoms would make it a one-goal game when Nic Aube-Kubel scored his first goal of the season when he beat Desrosiers glove side from the right circle.

The Phantoms following Aube-Kubel’s goal continued their intensity in the Thunderbirds zone and it would pay off when rookie forward Morgan Frost scored his first professional goal off a rebound to tie the game at 3-3. Phantoms forward Greg Carey received the primary assist on the play after trying to stuff the puck past Desrosiers before it found Frost’s stick.

Lehigh Valley would try to find a third goal in the period but were unable to do so. They’re strong third-period effort of 19 shots and two goals would allow them to pick up a point as this one went to overtime.

In overtime, the Phantoms would find themselves on the powerplay in the final minutes and were able to collect a few scoring chances including strong a drive to the net from Joel Farabee but were unable to get a game-winner in the extra five minutes.

Next Time Out: The Phantoms will go on the road for the first time in the 2019-20 season as they travel to Charlotte to take on the Checkers in back-to-back games next Friday and Saturday. They’ll return home again on November 1st to take on the Wilkes-Barre/Scranton Penguins for the second time this season after handing the Penguins a 4-1 loss on October 11th. Fans can purchase tickets for the interstate rivalry game on Saturday night, HERE.