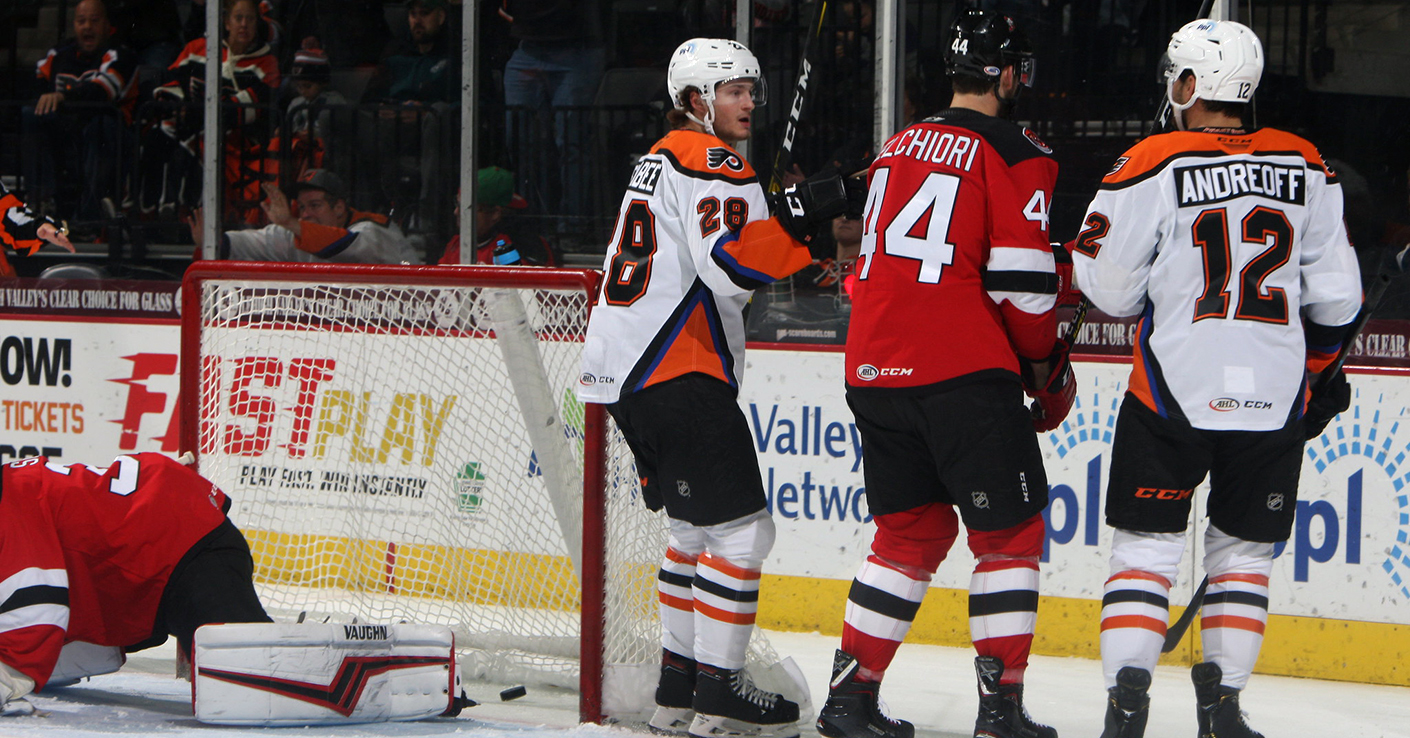 Lehigh Valley, Pa. – The Lehigh Valley Phantoms (2-1-1-0) saw both Andy Andreoff (2 goals, 1 assist) and Morgan Frost (3 assists) collect three points in a 4-1 win over the Binghamton Devils (1-3-1-0) on Friday night. Goalie Alex Lyon collected his second win of the season stopping 24 of 25 shots while Joel Farabee collected his third goal in three games. Mikhail Vorobyev also found the back of the net for his second goal of the 2019-20 season in the victory. The game also marked the return of former Phantom Chris Conner to PPL Center while first-year Phantom Kurtis Gabriel faced his old team in the Devils.

The Lehigh Valley Phantoms began the final leg of their five-game home stand with a dominating 4-1 victory over the Binghamton Devils on Friday night. The Phantoms used three first period goals to set the tone for the game while goalie Alex Lyon was strong in net. 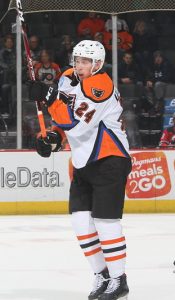 Third-year Phantom Mikhail Vorobyev opened up the scoring just 4:35 into the game while the Phantoms were on the power play. German Rubstov earned the primary assist on the play with a tape-to-tape pass to Vorobyev who deflected the puck past Binghamton goalie Giles Senn to give the Phantoms the early lead. The goal is Vorobyev’s second of the season while the assist marked the fourth of Rubstov’s season, leading the team in the category. The goal also marked the third time in four games this season that the Phantoms have scored the opening goal.

A little less than 10 minutes later, the Phantoms once again were able to strike on the power play, when Joel Farabee notched his third goal of the season. The goal was set up perfectly when Andy Andreoff was able to find a driving Farabee in front of the net to give the Phantoms a two-goal lead. Rookie forward, Morgan Frost was also able to collect his first professional career point on the goal, picking up a secondary assist. 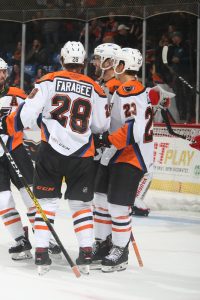 Towards the end of the first period, Phantoms fans warmly welcomed Chris Conner back to PPL Center. Conner spent the last four seasons with the Phantoms, playing in 265 games with the organization, the most in Lehigh Valley history. In his time with the Phantoms, he was able to collect 71 goals and 128 assists for a total of 199 points.

Lehigh Valley would find the back of the net for the fourth time late in the third period when Andy Andreoff scored his second goal of the evening and his third point of the game off a redirection. Phantoms defenseman Tyler Wotherspoon got the primary assist on the goal, his first point of the season. Morgan Frost also earned his third assist of the evening.

The Devils would get on the board in the final minute of the third period when forward Ben Street was able to squeak the puck past the side of Lyon to cut the Phantoms lead to 4-1. The goal would be the only blemish on Lyon’s stat sheet for the evening as he made 24 saves on 25 shots. It was his second-straight winning effort after earning a victory last weekend against the Wilkes-Barre/Scranton Penguins.

Next time out: The Phantoms finish their PPL Center homestand on Saturday evening when they take on the Springfield Thunderbirds at 7:05 p.m. Get tickets to the game HERE.