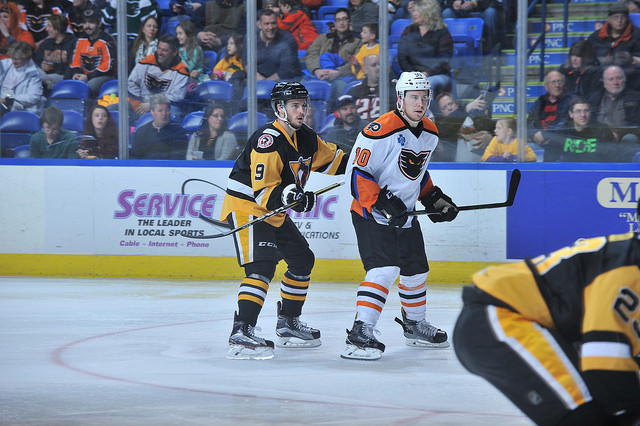 Wilkes-Barre, PA – The top two teams in the Eastern Conference have seen each other an awful lot lately. And on Saturday night at Wilkes-Barre it showed in a feisty showdown of two hard-working teams. The Penguins emerged with a 3-0 victory over the Lehigh Valley Phantoms as the two heated rivals engaged in several post-whistle scraps and shoving matches. 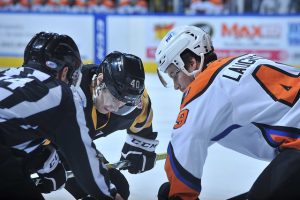 Greg Carey returned to the lineup after missing the last two games with injury and almost scored on a breakaway late in the second period but DeSmith at the last instant just nicked the drive away with his blocker. Former Penguin Chris Conner was in clean for a breakaway early in the third period but his attempt to go five-hole on DeSmith inadvertently slid through the crease over to the corner.

Mark Alt had a tremendous opportunity to score on the backdoor following a Scott Laughton feed across the slot. But while DeSmith had been spun around and was facing the wrong way, Alt’s shot towards a mostly open net glanced off the crossbar and bounced away.

Frank Corrado and Troy Josephs both scored their first in a Penguins sweater while Derek Pouliot contributed his seventh to lead the Penguins on to victory. Lehigh Valley is 4-5-1 against the first-place Penguins in the hotly contested rivalry season series.

The Phantoms at 43-22-4 maintained their hold on second place in the Atlantic Division as third-place Providence lost its game against the Springfield Thunderbirds on Saturday evening to remain one point behind. Lehigh Valley has just seven games remaining on the regular season including four at home. The Phantoms last games before the Calder Cup Playoffs are Friday, April 14 in the home finale against the Providence Bruins and then Saturday, April 15 on the road against the Binghamton Senators. 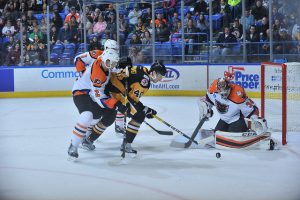 Lehigh Valley had to think fast and adjust on the go after their recent roster moves. Colin McDonald was called up to the Philadelphia Flyers earlier in the day. And goalie Anthony Stolarz was summoned just a couple hours before game-time on an emergency recall following an illness to Steve Mason. McDonald scored in his season debut with the Flyers while Stolarz entered for an injured Michal Neuvirth to complete a 3-0 shutout of the New Jersey Devils.

Alex Lyon was removed from the game partway through the third period allowing backup goalie Martin Ouellette to see some late action.

The Phantoms withstood an early Penguin surge to emerge in a 0-0 deadlock after one period. Lyon was terrific with 14 big stops in the opening 20 minutes. It was his first game back at Wilkes-Barre since a 3-0 shutout of the Penguins on March 8. Tom Kostopoulos was denied point blank off the right pad in the first few seconds and Oskar Sundqvist offered a drive from the left ring that appeared to glance off the helmet of Lyon.

The first frame also featured numerous grappling matches after the whistle as well as several hits, shoves and chops behind the play. The officials mostly let both teams play on despite the occasionally nasty tone so indicative of playoff atmosphere style hockey. The teams came together after the first-period horn to again express and share their feelings of mutual distaste for each other.

Danick Martel and Tom Kostopoulos became entangled as they skated back towards the Phantoms zone chasing their teammates. And eventually they took each other down with Martel deciding to continue the battle after his helmet became dislodged. Their two-minute minors evened out in the form of some 4-on-4 hockey and came shortly after Greg Carey and Oskar Sundqvist were chopping away at each other along the boards among other little mini-issues for some of the opponents. 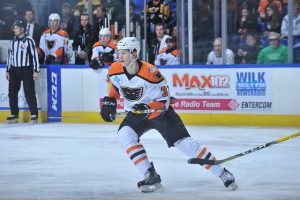 The Penguins broke through shortly after that little scrap with both teams down a man. Wilkes-Barre/Scranton was barely offside as they screamed across the blue line and eventually worked the puck to Dominik Simon on the right wing whose shot glanced off the right arm of Alex Lyon and was deposited on the other side of the crease by pinching defenseman Frank Corrado stationed on the doorstep. The defenseman’s second goal of the season was his first as a Penguin since coming over in a trade for Steve Oleksy just over a month earlier.

With three minutes remaining in the second period the Phantoms had difficulty clearing the zone against the relentless Wilkes-Barre/Scranton attack. After several blocks to hang in there the Phantoms finally surrendered a second tally when David Warsofsky’s shot from center-point was deflected in by new pickup Troy Josephs who scored his first career professional goal in the sixth-ever game for the Clarkson University product.

The Phantoms returned for the third determined to show off their late-comeback skills again but once Conner’s clean breakaway chance slid through to the corner it appeared it just wasn’t going to be the Phantoms’ night.

T.J. Brennan and Zack Aston-Reece were dropping the gloves a few minutes into the third and were ready to display their own pugilistic wares when the linesmen interjected to break up the potential party. 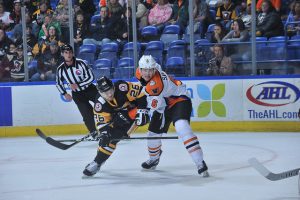 Wilkes-Barre/Scranton quickly struck for another 4-on-4 goal shortly after the ensuing faceoff when Pouliot’s blast from center-point eluded the right arm of Lyon for a 3-0 lead. It was just a few seconds after that following the next whistle that head coach Scott Gordon had decided Lyon had given enough for the evening. Martin Ouelette made saves on all eight shots he faced the rest of the way in his second appearance, and first in relief, for the Phantoms this season. It was Ouellette’s 19th game all-time with Lehigh Valley in the past three years. The University of Maine product had arrived to Wilkes-Barre from Reading just in time for the game.

Wilkes-Barre/Scranton out shot the Phantoms 45-26. The Penguins were 0-for-3 on the power play while Lehigh Valley was held to 0-for-2.

The Phantoms next head to Giant Center in Hershey on Sunday evening for a 5:00 p.m. rivalry clash with the Bears. Listen to the game on 790-WAEB, the Phantoms 365 app or Phantoms Radio 24/7 on TuneIn.

Lehigh Valley opens a three-game homestand next Wednesday night against the Hershey Bears at PPL Center. The Phantoms will also entertain the Wilkes-Barre/Scranton Penguins on Friday, April 7 and then tangle with the Springfield Thunderbirds on Saturday, April 8. Tickets are available at PPLCenter.com