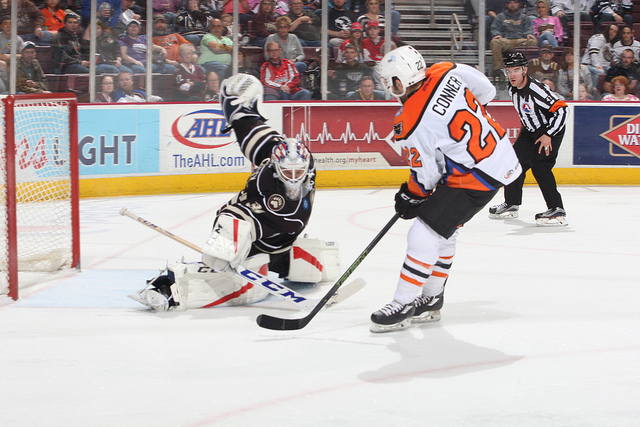 Hershey, PA – Chris Conner converted in each period on Sunday evening for the Lehigh Valley Phantoms’ third hat trick of the season as part of a 4-2 win at rival Hershey on Sunday evening. Conner’s third career hat trick also included an assist on a Greg Carey goal for a four-point night while rookie goalie Alex Lyon was again magnificent in his 25th victory of the season rejecting 32 Bears’ offerings along the way.

The 33-year-old Conner had recently missed a couple of weeks with injury but returned to the lineup in a big way in the weekend finale on Sunday with his trio of markers. Two of his tallies came on breakaways and then his third to clinch the hattie came after a nifty toe-drag move to the slot while carrying up the left wing in a 2-on-1 with Mark Alt. 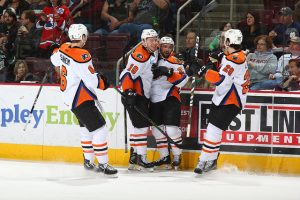 Conner’s 22 goals on the season also eclipsed his previous best mark established two other times at 19. His first two hat tricks came 10 days apart in February of 2010 when he skated for the Wilkes-Barre/Scranton Penguins. Conner had to wait over seven years for his next trio performance. The Michigan Tech product scored all three of his goals against a fellow player from the same collegiate program in Houghton, Michigan although Pheonix Copley patrolled the crease for the Huskies about a decade after Conner had played there.

Chris Conner joins Danick Martel and T.J. Brennan with Phantoms hat tricks this season. It is the ninth hat trick all-time for Lehigh Valley and is the 64th ever hat trick for the Phantoms franchise beginning with the Philadelphia Phantoms in 1996. 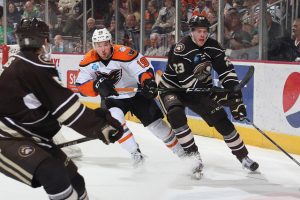 The Phantoms improved to 44-22-4 with six games remaining in the regular season and the regulation victory in a four-point swing game against a playoff contender successfully dropped Lehigh Valley’s magic number to six. The Phantoms can leap even closer to clinching their first Calder Cup Playoff appearance at PPL Center with another win on Wednesday in a rematch against Hershey that would lower the number all the way down to just two.

Lehigh Valley blasted out of the gates for a strong start in front of a big sellout crowd at Giant Center. The Phantoms blasted away on Copley from all angles and eventually took a 15-4 lead in shots as well as a 2-0 advantage on the scoreboard.

Greg Carey sprung Conner free for the first breakaway try and the crafty winger pushed his backhander for his 20th goal of the season through the five-hole of Copley for a 1-0 lead. Conner received the pass rushing up the left wing boards but had enough speed to angle straight at the goal without the Bears defense catching him. Alex Lyon also received an assist on the opening strike at 12:55 into the game.

Less than one minute later, the Carey/Conner combo connected again on another left-wing sprint. This time Carey received the pass from Conner just past the Hershey bench but on his angle at the net realized the Bears defense was closing in. The third-year-pro sniped from the left dot perfectly to the upper-far corner for a career-best and team-leading 27th goal of the season.

Hershey surged back in the second period with almost-consecutive goals of their own. Nathan Walker (11th) capped a quick rush of shots after a speedy entry right up the middle by Chandler Stephenson. After an initial shot was deflected wide, Riley Barber quickly found Walker again who was moving towards the right dot who quickly fired back towards the net before Lyon could be properly positioned. The Bears were on the board at 5:05 into the second period to cut the Phantoms margin to 2-1.

110 seconds later it was Jakub Vrana (16th) up the middle after a right-wing pass from veteran defenseman Tom Gilbert to quickly even the count at 2-2. 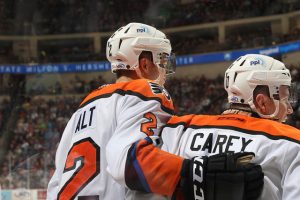 Andy Miele helped spark the Phantoms comeback when the 5’8″ center squared off in a fight against 6’4″ Hampus Gustafsson. The undersized Miele got in the first few shots and a couple others at the end before both went down.

Conner’s quick poke-check of the puck from Travis Boyd on the Phantoms blue-line turned into a long breakaway. This time he offered a little pump with the backhand before moving the puck swiftly to his forehand thus inducing an opening between the skates of Copley for another five-hole lamplighter. Conner’s second of the night came at almost exactly the midway point of the game and put the Phantoms back in front 3-2.

Conner would finish the hat trick less than five minutes into the third period. Mark Alt helped clear the puck away while breaking up a hard Hershey attack in the Phantoms’ zone. Alt connected with Conner for a 2-on-1 who carried up the left-wing while eyeing Alt on the other side who was mostly covered. Conner cut sharply from the left circle and somehow dragged the puck back and around the defenseman Jonas Siegenthaler and over to the slot to create an opening on the short-side past the blocker of Copley to cap the highlight-reel caliber conversion. 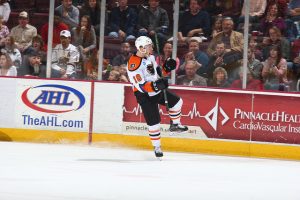 Hershey thought they had pulled back to within a goal on a Nathan Walker deflection of a Siegenthaler drive but the Phantoms caught a break when the officials conferenced about the goal and eventually determined that the re-direction came as the result of a high stick over cross-bar level.

Just 30 seconds after that came a big Hershey blast from the left circle off the post and out.

Corban Knight came very close to feeding Conner across the blue-line for a chance at a late empty-netter and a possible four-goal game but a back-checking Hershey skater broke up the play at the last instant.

Robert Hagg offered a long drive from behind his own goal that appeared headed into the empty-net almost 200 feet away but ended up spinning just wide of the post by a couple of inches.

Lehigh Valley improved to 7-4-0 against Hershey this season and have won the last three meetings. The Phantoms enjoyed plenty of success at Giant Center this season finishing with a 4-2-0 record in the Bears’ Den.

Lehigh Valley opens a three-game homestand on Wednesday night against the Hershey Bears at PPL Center. The Phantoms will also entertain the Wilkes-Barre/Scranton Penguins on Friday, April 7 and then tangle with the Springfield Thunderbirds on Saturday, April 8. Tickets are available at PPLCenter.com