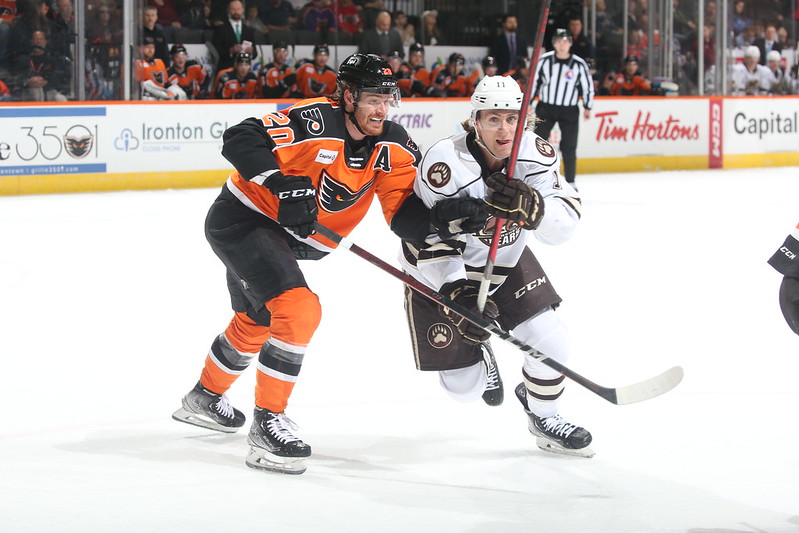 Hershey Wins at PPL Center for First Time This Year

Lehigh Valley, PA – The seventh try was the charm for the Hershey Bears who finally found a way to secure a win at PPL Center this season in the form of a 4-3 overtime triumph on Friday night. Max Willman (11th), Tanner Laczynski (7th) and Garrett Wilson (17th) all scored for the Phantoms while Cooper Zech notched a pair of assists. Brett Leason scored the winner for the Bears.

The Phantoms had previously won the last six games against Hershey at PPL Center but the Bears prevailed in their last chance.

Other results of the evening from around the Atlantic Division resulted in the elimination of the Phantoms from the Calder Cup Playoff chase.

The Phantoms extended their home-ice point streak to nine (6-0-3) and their overall point streak to five (1-0-4). Lehigh Valley (27-30-15) has now played four straight games to a regulation tie only to fall in overtime or the shootout. 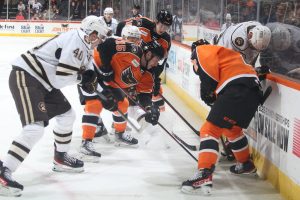 The hard-fought game had a playoff intensity throughout with two bitter rivals desperately needing the key win.

Garrett Wilson and Dylan McIlrath dropped the gloves in the opening seconds and engaged in an extended heavyweight bout to light an early spark to the excited PPL Center contingent.

Just a few seconds later, Cooper Zech picked off a lead pass in front of the Hershey line and connected with Willman who rifled home the game’s first marker from the left circle just 36 seconds into the contest for a 1-0 lead.

But Hershey struck back with Bobby Nardella (6th) rushing towards the net from the blue line on a give-and-go with Garrett Pilon. The Nardella backhand chip, on his birthday, evened the count at 1-1.

Aliaksei Protas gave the Bears the lead on a somewhat similar rush to the net in the second period receiving a pass from Brett Leason to score past Felix Sandstrom.

But just barely over a minute later it was Tanner Laczynski picking off a clearing try in the high slot and quickly burying his drive past Pheonix Copley to tie the game at 2-2. Max Willman’s try for a one-timer and misfired wide but Garrett Wilson got behind the net for the quick retrieval. His try to center out in front was briefly picked off by Hershey before the Laczynski interception and therefore the goal was deemed to have been unassisted.

Hershey took a 3-2 lead in the third period on a Lucas Johansen seeing-eye shot from the left boards right off a faceoff win that went to the far-post side and sneaked under the glove of Sandstrom.

But just 57 seconds later, it was the Phantoms with a quick response again. This time Garrett Wilson got a piece of a right-point shot from Adam Clendening for a perfect deflection past Copley to again even the count, this time at 3-3.

Leason was briefly tangled up with Brennan Menell in the high slot in overtime but the puck took a friendly bounce to his left and he scooted over to snipe to the upper-far corner past the glove of Sandstrom for the winner which also officially clinched a playoff spot for the Bears while snapping a four-game losing streak.

The Phantoms are 7-4-2 against the Bears and the two teams will rematch on Saturday night in Chocolatetown.

The Phantoms have three home games in the final week of the regular season with contests on Tuesday, Wednesday and Saturday April 30th. The next home game on Tuesday night is against the Springfield Thunderbirds. The season finale on April 30th is against the Wilkes-Barre/Scranton Penguins and is also Star Wars Night featuring many costumed characters, Star Wars music and a fun Star Wars theme throughout.