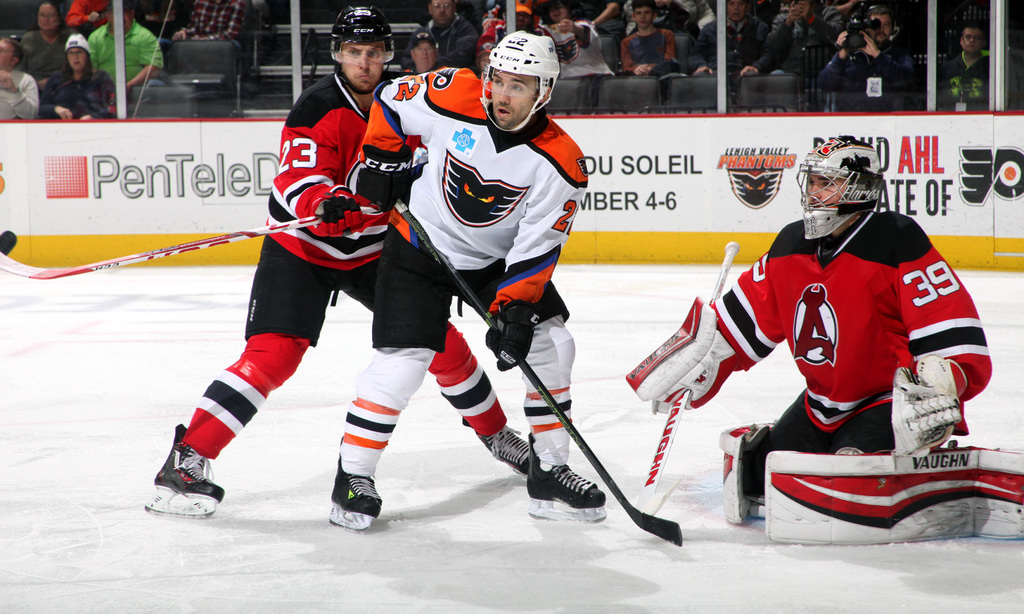 Lehigh Valley, PA – The fourth-largest crowd ever at PPL Center of 8,959 were treated to the team’s first home overtime contest of the season but the visiting Albany Devils prevailed in the 3-on-3 extra session for a 2-1 victory in Allentown on Saturday. Joe Blandisi scored on the back-door after Anthony Stolarz was pulled to the other side by a dangling move by Corey Tropp.

The packed house was the largest home crowd this season for the Phantoms. The largest attendance ever for a Lehigh Valley Phantoms home game was March 28, 2015 when 9,017 fans jammed into the Center City venue for a game against the Wilkes-Barre/Scranton Penguins.

The Phantoms concluded their impressive week with five standings points out of a possible six including a 2-0-1 record in their three-game point streak. It was almost a perfect six-for-six. Petr Straka had tied the score in the third period with a power-play goal for his team-leading ninth of the season and also found the iron for what would have been a potential winning goal.

After a pair of games in which the offense came much easier for the Phantoms with a combined total of 13 goals on Wednesday and Friday, the Lehigh Valley skaters found their scoring opportunities much more difficult to come by against the stingy-style defense of the Albany Devils. At 2.25 goals allowed per game, Albany rates third-best in the AHL and proved to be far more difficult for the Phantoms who had previously in the week lit up a pair of defenses who rate at the bottom in that department.

With only three shots in the first period and five in the second, the Phantoms found themselves trailing 1-0. Mike Sislo scored on the power play in the concluding minute of the first period for an initial Albany advantage that they tried to make hold up for the duration.

“We had three shots in the first, five or six in the second and countless turnovers,” head coach Scott Gordon said. “We made it hard on ourselves and to their credit they play a style that allows very few shots against. They have a great power play, great penalty kill and apparently have some pretty good goaltending too.”

But the Phantoms offense got better and on track in the third with 14 shots in that frame alone bolstered by three power plays. Petr Straka scored on a rebound down low just as a Blake Coleman penalty had expired. The Albany skater was still actually in the box when Straka corralled Andrew MacDonald’s center-point slapper off the pads of goalie Doug Carr. But the goal technically was recorded as a 5-on-5 tally. Tyrell Goulbourne also received credit for an assist with a near rebound strike before Straka converted.

“They didn’t really have structure and we got the puck to the point,” Straka said. “I saw that A-Mac (Andrew MacDonald) was going to shoot it and I went for the tip. We had talked about finding the rebounds and burying them. Fortunately for us, we got a point out of it.”

After posting strong numbers a season ago with 14 goals, the third-year pro from the Czech Republic already has nine goals this season in just 15 games which now places him just one off the league lead trailing three players who have 10 (Frank Vatrano of Providence, Hunter Shinkaruk of Utica, Bracken Kearns of Bridgeport).

During the three-on-three overtime, Mike Sislo pounced on a Phantoms turnover and almost won the game on his breakaway but his drive clanged off the iron and away. A few moments later, Corey Tropp carried the puck back down the wide-open ice with a 2-on-1. As is common in the wild 3-on-3 affairs of today’s version of overtime, the goalie attempted to make a big play to help the percentages of breaking up the rush. But Tropp’s give across bounced through the blue and found Blandisi on the back-door who fired the winner into the net glancing off the right hand of Samuel Morin who narrowly missed a clean block of the drive.

It was sweet revenge for Blandisi who made the mistake of challenging big Samuel Morin to a fight in the second-period. The 6’7″ defenseman Morin in his first pro fight successfully connected with one of his punches to draw blood out of the nose of Blandisi and send him temporarily out of the game.

“It went pretty well, Morin said of his first pro fight. “He wasn’t that tough. I just tried to wake up the team, because the first and second period we were going nowhere so I thought it was a good time to drop the gloves.”

Albany out shot the Phantoms 29-22. The shot-count equaled the lowest of the year for Lehigh Valley who also had only 22 shots October 25 vs. Toronto and also November 6 against Hershey.

The Devils were 1-for-3 on the power play while the Phantoms officially finished at 0-for-4.

The game marked the only visit to PPL Center for the Albany Devils this season. The Phantoms return the favor in January with a trip to the Capital District of New York.

The Phantoms embark on four consecutive away games beginning next weekend with a three-in-three road-swing in New England. The team’s next game is Friday night against the slumping Providence Bruins. The Phantoms travel to the Hartford Wolf Pack on Saturday and then return to Providence for Sunday afternoon engagement.

Lehigh Valley’s next home games are over Thanksgiving Weekend. The Phantoms host the Hershey Bears on Black Friday, November 27 on Go and Grow presented by Lehigh Valley Health Network. On Saturday November 28 it’s the Providence Bruins providing the opposition on Autograph Night with all of the Phantoms players staying late after the game to meet and greet with the fans.

Limited seats are remaining for the team’s upcoming home games and are available at PPLCenter.com, by calling 610-347-TIXX (8499), or by visiting the Mealey’s Furniture Box Office at PPL Center.

Saturday, November 28 (7:05) – Providence Bruins at Lehigh Valley Phantoms (Post-Game Autographs with all of the Phantoms players!)