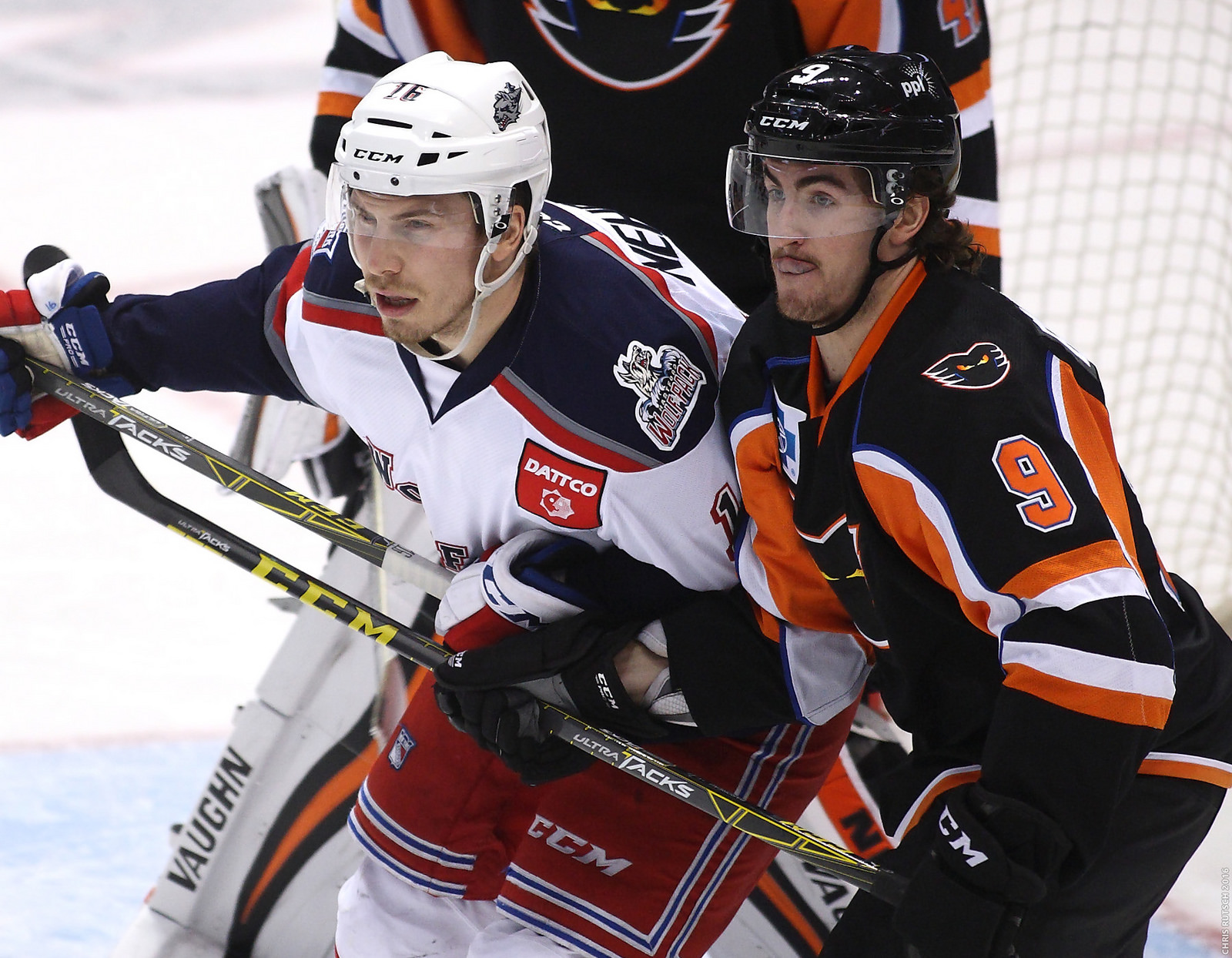 Hartford, CT – The Lehigh Valley Phantoms raced out to a 2-0 lead in Hartford, Connecticut on Saturday afternoon but the Wolf Pack overcame the early deficit to claim a 4-2 conclusion at XL Center.

Chris Conner (13th) and Colin McDonald (12th) tallied for the Phantoms in the first period staking the visitors a 2-0 lead. But the tables turned just after the midway point of the game as Hartford rallied with goals from former Phantom Tyler Brown (2nd), Jayson Megna (12th), Marek Hrivik (8th) and Mat Bodie (6th).

Jason LaBarbera received the starting opportunity in net after Anthony Stolarz was recalled earlier in the day by the Philadelphia Flyers. Playing in his former home arena where he excelled for four seasons and won AHL MVP honors in 2003-04, LaBarbera was on his game from the start and put the Phantoms in position to snag a hard-earned road triumph.

Newcomer Steven Swavely made his professional debut and carried himself well as the team’s fourth-line center. The Reading, Pennsylvania native is a life-long Flyers fan who grew up watching many Philadelphia Phantoms games at Spectrum as well as the Flyers games he attended. The former captain at the University of Maine referred to his opportunity to sign a pro contract in the Flyers system as a “dream come true.”

Jeff Malcolm rebounded from perhaps a rocky start to hold the Phantoms at bay the rest of the way and claim the victory for the affiliates of the New York Rangers.

Two weeks ago, the Phantoms overcame a third-period deficit to post a thrilling 2-1 win at XL Center. This time around, it would be the host Wolf Pack returning the favor with a third-period rally of their own against the Phantoms.

Lehigh Valley raced out to a 2-0 lead in the opening frame beginning with Chris Conner’s breakaway strike on a long connection from Tim Brent in the defensive zone scooping up a rebound. Brent was playing in his first game in almost two months following an upper-body injury and launched a home-run pass perfectly on the tape of Conner who wouldn’t miss on the backhand at 9:48 into the first period. Taylor Leier also received an assist on the play.

The Phantoms pushed that lead to 2-0 on a fine feed from the wing finding Colin McDonald in the slot whose big blast went off the glove of the waving arm of Malcolm and dribbled into the net. The native of nearby Wethersfield grew up attending many games at XL Center where his Dad had played for the Hartford Whalers and had also served as a broadcast commentator for the Whalers and Wolf Pack.

The Phantoms enjoyed their 2-0 margin all the way to the halfway mark of the second period but Hartford turned up the pressure from there. Brady Skjei connected with ex-Phantom Tyler Brown who scored on the blocker-side of LaBarbera at 10:05 into the second period to spark the Wolf Pack rally. Brown played in 181 games for the Adirondack Phantoms over three seasons from 2011-14.

Jayson Megna converted on a rebound of a Mat Bodie shot to even the count with 2:05 remaining in the middle frame. LaBarbera was in position for the follow-up power-play drive and even got a glove on the liner from Megna but the shot had enough to make it through for the equalizer.

Marek Hrivik scored on a debated goal at 6:00 into the third period. Holding his stick up high in the slot, Hrivik chopped down to deflect a Chris Summers blast from the point for the go-ahead tally. The Phantoms contended the goal should have been waived off due to a high stick but the officials deemed that the stick was underneath the crossbar by the time it made contact with the puck. High-stick goals are not subject to video-review in the American Hockey League.

Hartford capped the scoring with 9:46 remaining when Mat Bodie rushed up the right-wing and blasted through a short-handed strike on the glove-side of LaBarbera. It was just the third shorthanded goal surrendered by the Phantoms this year and only the second one against a goalie (one other shorthanded goal allowed was 4-on-6 with an empty-net but still technically qualifies as a shortie).

Lehigh Valley finished 0-for-5 on the power play while the Wolf Pack were 1-for-5. Hartford out shot the Phantoms 47-30 in the game. The two Atlantic Division rivals will rematch at PPL Center on Saturday, March 26 in the conclusion of the season series.

The Phantoms continue their five-game road swing on Wednesday night against the Rochester Americans and on Friday night at the Toronto Marlies. Be sure to catch all the action on FOX 1470-AM, online at www.fox1470.com or via the iHeartRadio app with “Countdown to Faceoff” beginning both evenings at 6:20 p.m.

The Phantoms return home on Sunday, March 20 at 5:05 p.m. against the Portland Pirates in the opener of a four-game homestand at PPL Center. That game will also feature a fun-filled post-game autograph session with all the Phantoms players!