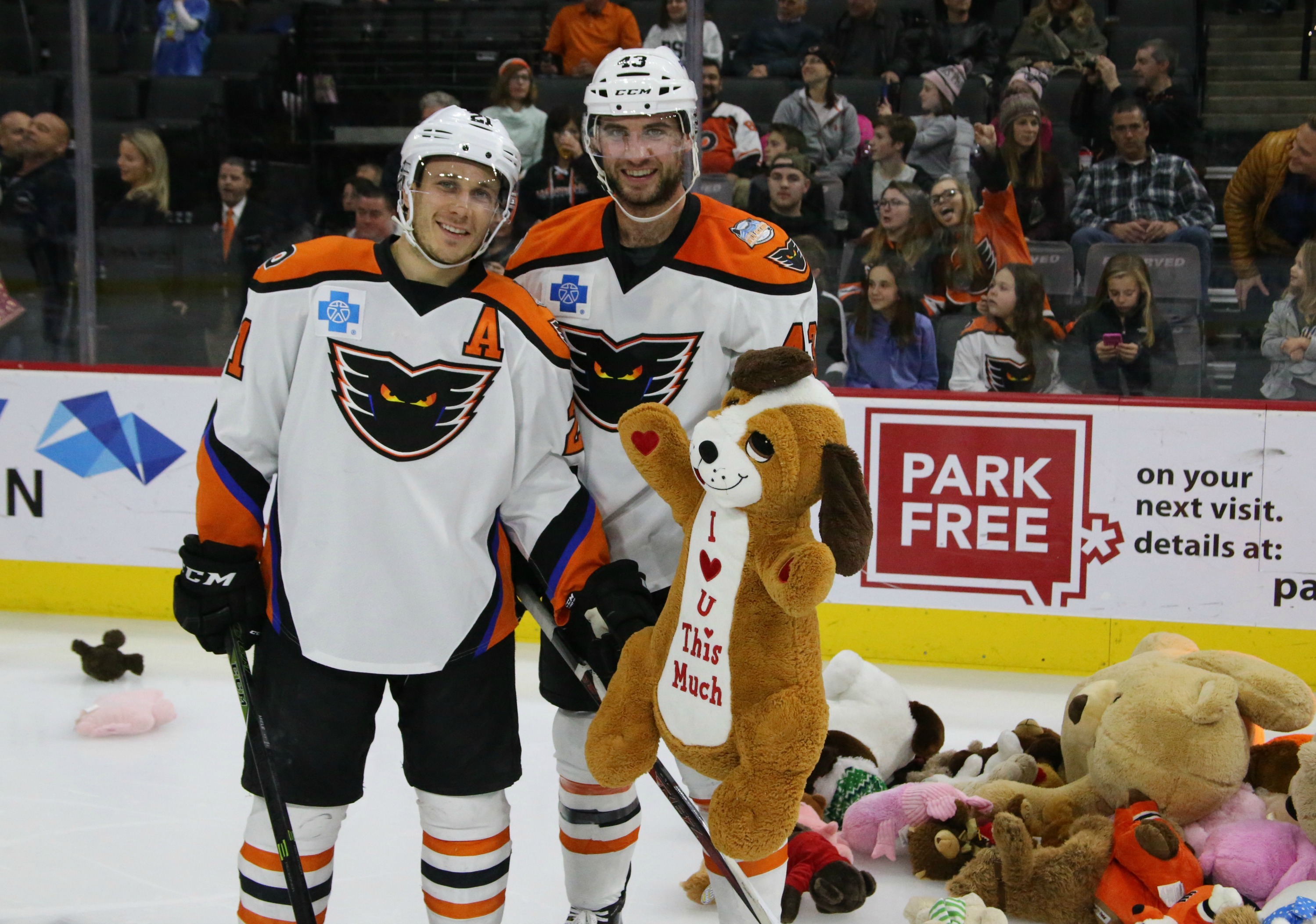 Lehigh Valley, PA – It didn’t take long at all Saturday evening for the PPL Center ice to be covered in teddy bears. 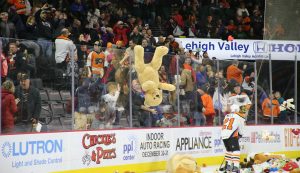 Nic Aube-Kubel (4th) scored just 59 seconds into Saturday’s contest setting off a cascade of teddy bears and stuffed animals, which kick started a 4-2 Lehigh Valley victory over the Rochester Americans in front of 7,830 fans at PPL Center. Radel Fazleev (2nd), Jordan Weal (10th) and T.J. Brennan (8th) also scored for the Phantoms as Lehigh Valley captured its 15th win over the team’s last 19 games. With Saturday’s triumph, the Phantoms improved to 17-7-1 overall this year and moved into second place in the tightly-contested Atlantic Division.

Saturday’s win also completed a sweep for Lehigh Valley in its weekend series with Rochester as the Phantoms improved to 7-3-1 at home this season.

With the game-opening goal on Saturday, Aube-Kubel joined the likes of Brett Hextall (2014) and Andrew MacDonald (2015) as Phantoms who have converted the coveted Teddy Bear Toss goal at PPL Center. 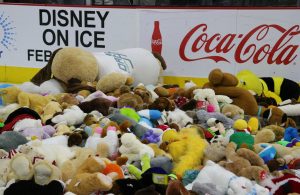 For the third season in a row, Dan’s Camera City was the presenting partner of the much-anticipated promotion and all teddy bears/stuffed animals will once again be donated to Valley Youth House for distribution to children across the Lehigh Valley. Through the first two seasons at PPL Center, Phantoms fans have donated more than 4,500 teddy bears/stuffed animals (1,728 in 2014 and 2,773 in 2015) with this year’s donation scheduled to be officially counted and delivered to Valley Youth House on Monday.

Danick Martel also notched a multi-point effort on Saturday with a pair of assists while goaltender Alex Lyon backstopped the victory with 25 saves on 27 Americans shots. With the win, Lyon improved to 10-5-1 overall this season.

Coming off a 2-for-5 performance in Friday’s win over Rochester, Lehigh Valley’s power play converted again on Saturday going 1-for-5 as the Phantoms’ man-advantage has now produced nine conversions over the club’s last seven outings.

Alexander Nylander (5th) and Eric Cornel (4th) accounted for Rochester’s offense while goaltender John Muse was handed the defeat despite a 31-save performance. 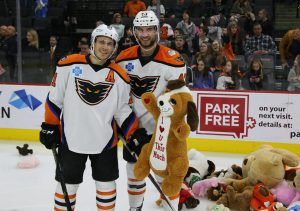 The Phantoms opened the scoring less than a minute into the rematch when Martel fed a cross-ice pass to Aube-Kubel who used the backhand to slip the game’s opening salvo past Muse for his fourth goal of the season. Martel and Will O’Neill assisted on the even-strength strike as Lehigh Valley grabbed the game’s opening goal for the 16th time in 25 games this year. The Phantoms are now an impressive 13-3 when scoring first this season.

The Phantoms doubled their lead just over three minutes later when a brilliant pass by Chris Conner from behind the Rochester net connected with Fazleev at the side of the goal who deftly slipped a shot off Muse and into the back of the cage. Conner and Corban Knight assisted on Fazleev’s second conversion of the year, which came just 4:14 into the first period.

The Americans sliced Lehigh Valley’s lead in half just over seven minutes into the opening frame when Mac Bennett fed a cross-crease pass that connected with Nylander at the side of the Phantoms net for his fifth marker of the season. Bennett and Cornel garnered assists on the five-on-five tally notched 7:13 into the first period.

Lehigh Valley re-established its two-goal advantage early in the second stanza when, from behind the Americans’ net, Martel found Weal at the right wing faceoff dot who promptly snapped home his 10th conversion of the year. Aube-Kubel collected the secondary assist on the even-strength strike buried 3:27 into the middle period.

Rochester trimmed the deficit back to a single goal just past the midway point of the contest when a well-executed transition rush resulted in Cornel’s fourth goal of the season. Cal O’Reilly and Cole Schneider assisted on the even-strength marker tallied 11:56 into the second stanza.

But the Phantoms weren’t to be denied and sealed the victory for good with just under six minutes remaining in regulation when Brennan pumped home his eighth goal of the year with a power play marker 14:09 into the final frame of regulation. Andy Miele and Weal assisted on the game’s final tally as Lehigh Valley improved to 11-4 when converting a power play goal this season.

The Phantoms are back in action for three games at PPL Center next week. Lehigh Valley’s home stand continues on Wednesday, December 14 when the Phantoms welcome the Bridgeport Sound Tigers to downtown Allentown. Wednesday’s game is Military Appreciation Night and will feature a Post-Game Photograph Session with Phantoms players on the ice.