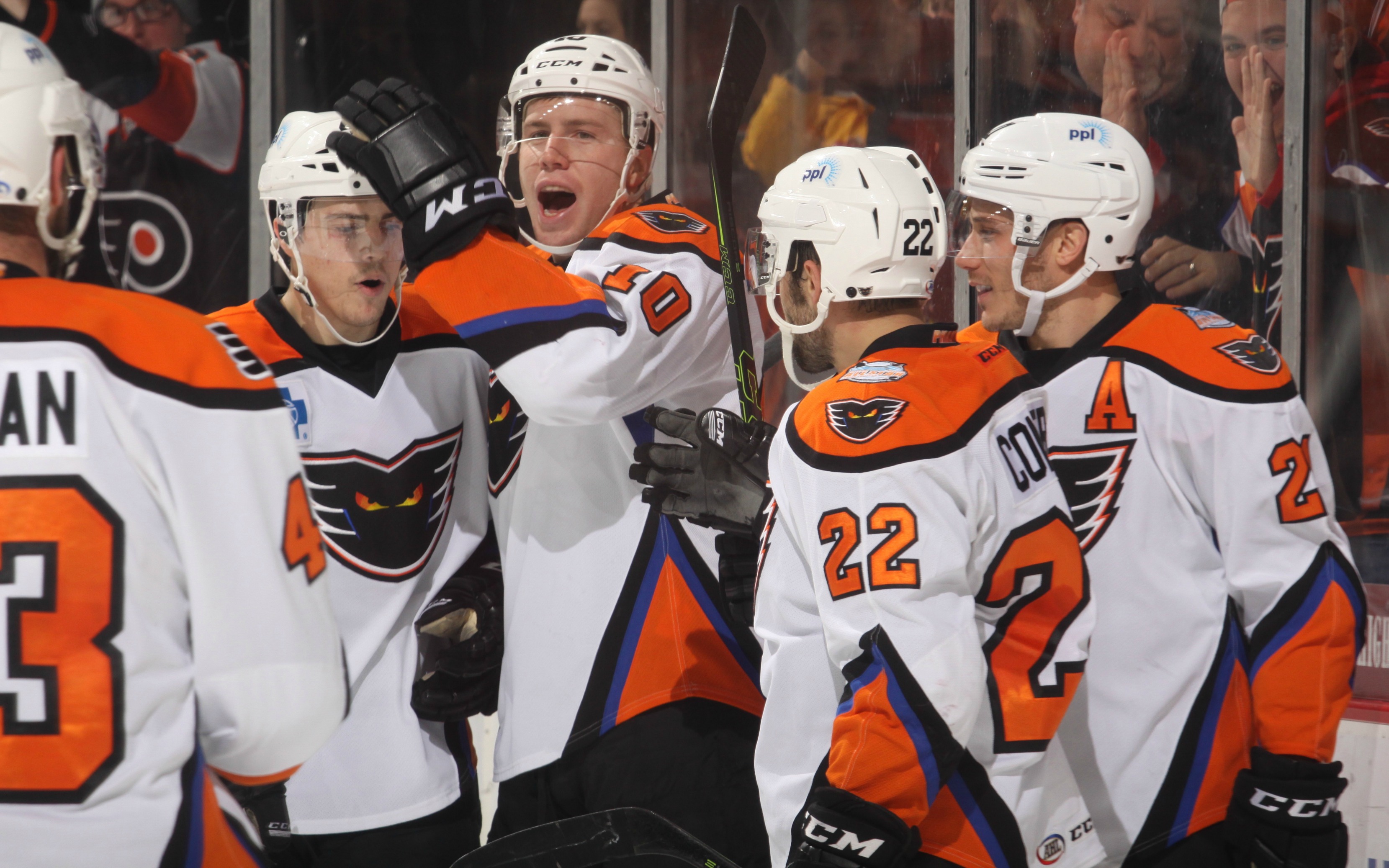 Sanheim Nets 1st of the Season in Come-From-Behind Win

Lehigh Valley, PA – Chris Conner recorded a goal and two assists while Andy Miele added a goal and an assist as the Lehigh Valley Phantoms erased a two-goal deficit en route to a thrilling come-from-behind 4-3 victory over the Rochester Americans Friday evening in front of 7,208 fans at PPL Center. With the win, the Phantoms improved to 16-7-1 overall this season as they captured their 14th victory over the team’s last 18 games. 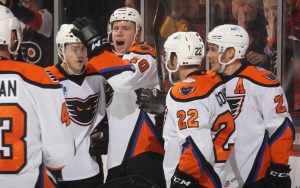 Greg Carey (11th) and Travis Sanheim (1st) also found the back of the net for Lehigh Valley as the team improved to 6-3-1 at home this year. For Carey, he moved into a tie with Phantoms’ captain Colin McDonald for the team lead in goals scored this season while Sanheim became the 20th different Lehigh Valley skater to find the back of the net this year.

Celebrating his 24th birthday, goaltender Alex Lyon earned the victory between the pipes thanks to 21 saves on 24 Rochester shots. With the win, the first-year netminder improved to 9-5-1 overall this season.

Lehigh Valley’s power play once again played a key role in the club’s success as the Phantoms poured in a pair of man-advantage markers in five opportunities. Friday’s game marked the 11th time this season Lehigh Valley has registered multiple power play conversions in a game and the fourth such outing over the team’s last six games. With Friday’s triumph, the Phantoms improved to 10-4 when scoring on the man-advantage this season. 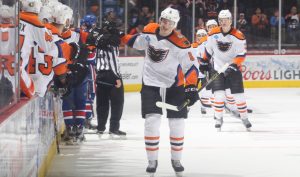 Friday’s contest marked the first of four total meetings during the 2016-2017 regular season between Lehigh Valley and Rochester with the two Eastern Conference foes set to reconvene in downtown Allentown on Saturday. Despite not having previously met this season, Friday’s action featured plenty of intensity and animosity between the Phantoms and Americans, which only serves to fuel Saturday’s rematch even further.

Cole Schneider (goal, assist) and Justin Bailey (goal, assist) paced the offensive effort for Rochester while goaltender Linus Ullmark was handed the loss for the Americans despite 44 saves on 48 Lehigh Valley shots.

Rochester opened the scoring just over five minutes into the contest when a deflected shot produced a loose puck at the left side of the net that was promptly tapped in by Bailey for his eighth goal of the season. Evan Rodrigues and Alexander Nylander assisted on the even-strength strike netted 5:10 into the first period. 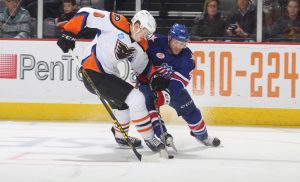 The Americans doubled their lead less than five minutes later when a beautiful transition through neutral ice resulted in Nick Baptiste’s 11th goal of the year. Cal O’Reilly and Schneider assisted on the five-on-five conversion netted 9:58 into the opening frame.

The Phantoms sliced Rochester’s lead in half just before the first intermission though when a blocked shot by Conner at the close of a successful penalty kill led to a breakaway for Sanheim who executed a brilliant move on Ullmark in burying his first goal of the season. Conner collected the only assist on the even-strength tally scored with just 13 seconds remaining in the first period.

Lehigh Valley then leveled the contest and grabbed its first lead of the night thanks to a pair of goals just 27 seconds apart.

First, off a clean faceoff win by Miele in the attacking zone, Carey launched a rocket of a slap shot that sizzled past Ullmark and into the back of the Americans net for his 11th goal of the year. Miele collected the only assist on the five-on-five marker scored 5:08 into the middle stanza.

Then, less than half a minute later, the Phantoms grabbed their first lead of the contest when, while on the power play, Conner’s right wing shot produced a rebound at the side of the goal that was promptly punched in by Miele for his second goal of the season. Conner and Jordan Weal assisted on the man-advantage marker landed 5:35 into the second period. With an assist, Weal increased his team-leading point total to 25 points (9 goals, 16 assists).

Lehigh Valley capped its impressive middle frame and secured the lead for good with a third conversion when Conner won a battle for a loose puck in the Rochester goal crease before slamming home his fifth goal of the year. McDonald and T.J. Brennan assisted on the power play tally notched 14:30 into the second stanza.

Rochester would climb back to within a single goal just prior to the midway point of the third period when Schneider connected on the power play for his 10th goal of the season but that proved to be as close as the Americans would get as Lehigh Valley’s defense held firm in securing the team’s 16th win of the year.

The Phantoms are back in action on Saturday when they welcome Rochester back to PPL Center. Saturday’s game is the highly-anticipated Teddy Bear Toss presented by Dan’s Camera City where fans are encouraged to bring new teddy bears or stuffed animals to the game and throw them onto the ice when the Phantoms score their first goal. All bears/stuffed animals will then be donated to Valley Youth House for distribution to children across the Lehigh Valley.