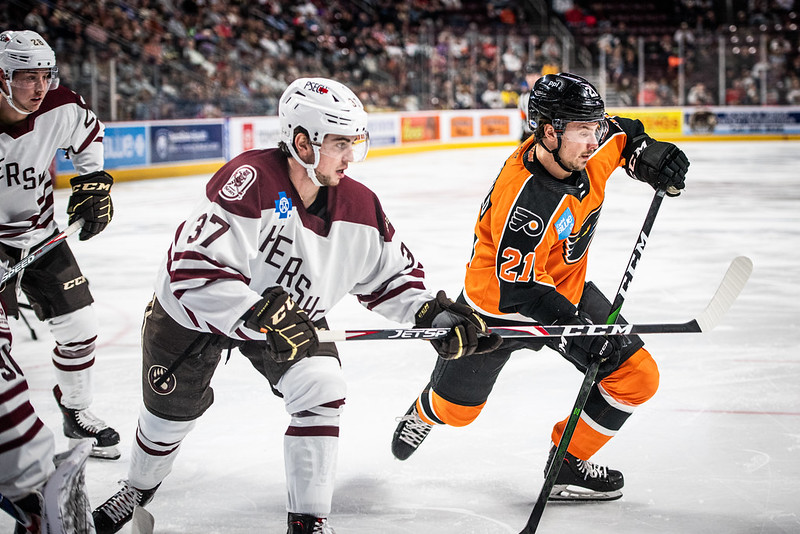 Hershey, Pa. – Andy Andreoff (4th) blasted through a 5-on-3 power-play goal for the Phantoms and J-F Berube made some strong stops in a relief effort but the Phantoms fell to Vitek Vanecek and the Hershey Bears in a 3-1 decision on Sunday evening at Giant Center.

Vanecek continued his strong play against Lehigh Valley with a 29-save effort in the 250th all-time meeting between the Phantoms and Bears franchises dating back to the beginning of the Philadelphia Phantoms in 1996.

The roster for Lehigh Valley (11-12-5) continued to change as the Phantoms were playing without Nicolas Aube-Kubel and Carsen Twarynski who had both recalled to the Flyers earlier in the day. 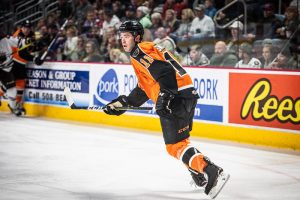 Bobby Nardella’s first goal as a pro, coming on the power play in the third period, boosted the Bears back up to a two-goal margin just three minutes after Andreoff began a comeback spark for the Phantoms with his conversion that had cut the lead to one.

The Phantoms had a strong start and quality chances against their nemesis, Vanecek, in the first period. Gerry Fitzgerald’s point-blank chance on top of the cage was denied on an impressive effort by the Hershey netminder among the 13 total shots the Phantoms blasted on goal in the opening frame.

But Hershey (14-9-5) surged back at the end of the period and broke through on a swinging deflection in the slot for Axel Jonsson-Fjallby (6th) on a center-point drive from Martin Fehervary with just 1:40 left in the period.

Hershey carried over its momentum into the second period with Garrett Pilon’s snapper from the right circle just 20 seconds after the intermission. Phantoms head coach Scott Gordon turned to J-F Berube in relief of Alex Lyon at that point in the team’s first goalie change of the season. 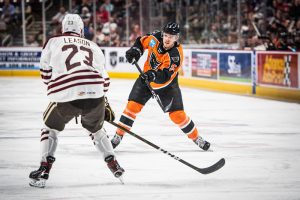 Gordon pulled his goaltender for an extra attacker with 5:30 remaining and then the team enjoyed a power play as well for a 6-on-4 advantage with 3:30 left but the Phantoms were still unable to break through.

Lehigh Valley out shot the Phantoms 30-21. The Phantoms were 1-for-6 on the power play while Hershey was 1-for-1. The rivalry will continue when the Bears visit PPL Center for the last game of 2019 on Sunday, December 29 at 3:05.