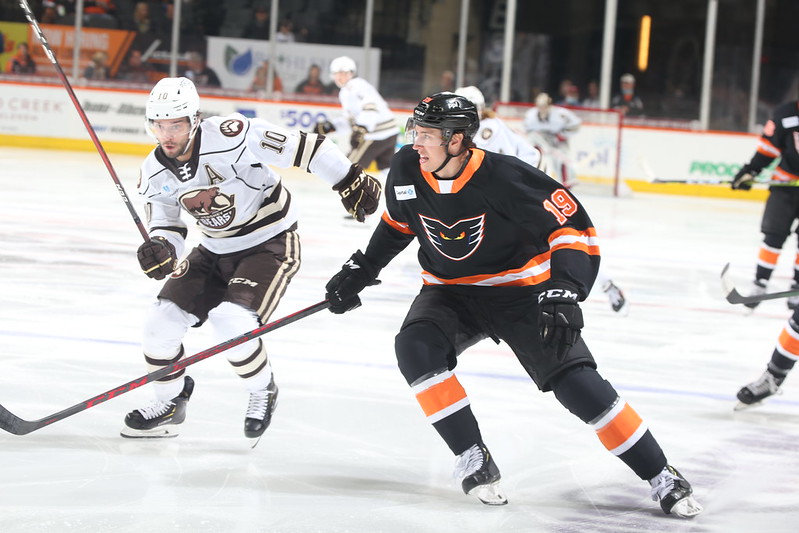 Lehigh Valley, PA – Isaac Ratcliffe had a power-play goal taken away via view review in the first period and the Phantoms couldn’t break through against Zach Fucale in a 3-0 loss in the team’s preseason finale at PPL Center.

Ratcliffe thought he had given the Phantoms a 1-0 lead early in the game after some zippy passing on the man advantage from Cam York and Morgan Frost. The referee signaled the puck had crossed the line and was a good goal. But the return of video-review this season burned the Phantoms in overturning the goal when the second look determined the puck had not fully crossed the line.

Ratclfife would later drop the gloves with Hershey’s Ben Hawwerchuk after taking except to a hit. Ratcliffe scored the take-down in the quick scrap.

Ryan Dmowski picked up a rebound goal early in the second period for Hershey and Aliaksei Protas added to their lead with 7:15 left in the third period before Shane Gersich sealed the win with an empty-netter.

The Phantoms were 0-for-7 on the power play but were moving the puck well while developing their chemistry. Gerry Mayhew had several strong chances in the slot and on breakways but was unable to beat Zach Fucale who was one of the top goalies in the AHL last year. His 14-save shutout propelled the Bears to victory.

Felix Sandstrom was strong in net for the Phantoms registering 18 saves on the 20 shots he faced.

Ian Laperriere makes his official debut asa head coach on Saturday night when the Phantoms travel to Wilkes-Barre/Scranton at 6:05 p.m. for the regular-season opener. The Phantoms also play at Hershey this Sunday at 3:00 p.m. to commence play on the 25th Anniversary Season of the Phantoms franchise that began as the Philadelphia Phantoms in 1996.