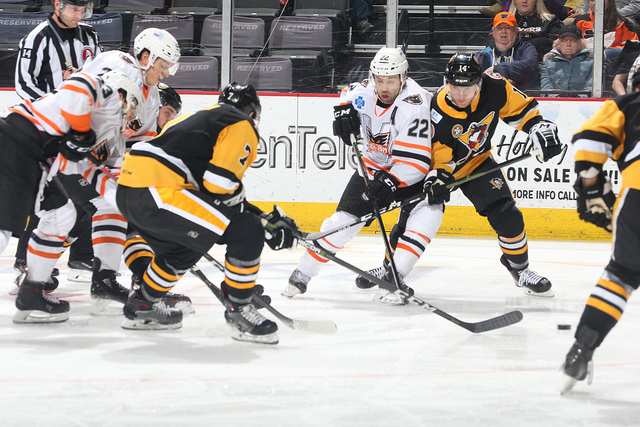 Lehigh Valley, Pa. – The Lehigh Valley Phantoms and Wilkes-Barre/Scranton Penguins expressed their mutual distaste for each other on multiple occasions in an intense and scrappy game to conclude calendar year 2018. A pair of empty-netters at the end helped push the visiting Penguins to a 7-3 triumph to end Lehigh Valley’s five-game point streak while also pinning the first regulation loss on interim head coach Kerry Huffman.

Gtreg Carey (16th), Reece Willcox (1st) and T.J. Brennan (7th) found the back of the net for the Phantoms while Ben Sexton (3rd, 4th) and Teddy Blueger (13th, 14th) each had a pair of goals for the Wilkes-Barre/Scranton attack.

A sellout crowd of 8,853 fans rocked PPL Center in the fight-filled engagement in the team’s largest crowd of the season. The great turnout also represented the 11th largest showing in for a Phantoms game in the team’s five seasons at PPL Center. It was an appropriate, historic showing on a night in which the Phantoms were paying tribute to some of the best moments in the five years in downtown Allentown while also sporting specialty “Five Years in the Lehigh Valley” jerseys that were auctioned off following the game.

It was the largest crowd for Lehigh Valley in almost a full calendar year dating back to a January 27th game against te Utica Comets that drew 8,912. 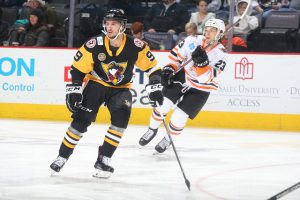 The two teams combined for 110 penalty minutes as the heated rivalry boiled over in what i just Game 5 out of 12 in the season series. Philip Samuelsson and Tyrell Goulbourne had first period scraps at the same time which saw Goulbourne receive an early game misconduct for his secondary altercation with Wilkes-Barre/Scranton captain Garrett Wilson.

Before it was all finished, Philippe Myers dropped the gloves with Joseph Cramarossa while Carsen Twarynski received a misconduct for continuing an altercation.

In-between the various fisticuffs came a contest thatwas proably closer than the final score made it seem. Goaltenders Alex Lyon and Tristan Jarry were on top of their games in a scoreless first period but the situation changed in the second.

Greg Carey’s power-play blast early in the middle frame was good for his team leading 16th of the season and a 1-0 lead on a strike that was assisted by T.J. Brennan and Chris Conner.

But Ben Sexton found a free puck at his skates between the circles for an equalizing goal and less tn a minute later came Jimmy Hayes on an interception and a breakaway strike for a 2-1 lead.

Later in the period came a Teddy Blueger deflection of a center-point slapshot to push the Penguins lead to 3-1 at the second intermission. 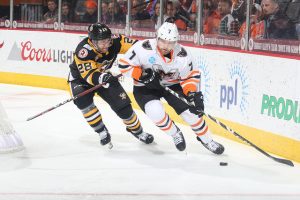 The Phantoms attempted another exciting third-period rally against the Penguins just like they had on Wednesday in northeast Pennsylvania. But this time Jarry wasn’t going to be beaten. A couple of spectacular stops on Leier and Brennan in the opening minutes of the third helped the Penguins preserve their two-goal margin.

A blocked shot turned into a breakaway for Adam Johnson which he finished with an elevated backhander for a 4-1 lead at 5:07 into the third.

The Phantom kept pressing but just five minutes later a puck sqirted out from behind the Phantoms goal to a wide-open Teddy Blueger who hammered through his big one-timer from the left circle for a 5-1 lead.

Just a few seconds later it would Chris Conner racing up the right wing to find Mike Vecchione in the middle whose shot was blocked down off the left pad of Jarry was laid free in the blue paint for a rapidly rushing Reece Willcox to pounce on the tap-in for his first of the season to pull the Phantoms to within a couple.

With nothing to lose, Interim head coach Kerry Huffman pulled the goalie with 7:00 remaining for an extra attacker and eventually Ben Sexton’s second of the game put the Penguins up 6-2.

T.J. Brennan fired a blast from the left side over the right shoulder of Jarry immediately off a Misha Vorobyev face-off win to pull the Phantoms to within three again at 6-3 with 3:08 remaining. But Chad Ruhwedel’s length-of-the-ice empty-netter would complete the scoring for a 7-3 final.

But the game wasn’t finished yet and there were still a few more scuffles to entertain the large turnout.

The Lehigh Valley Phantoms will open 2019 with a three-game road-trip through New England beginning on Friday night at the Providence Bruins. The PHantoms return to PPL Center on Friday, January 11th against the Binghamton Devils and Saturday, January 12th against the Hershey Bears on Giant Foods Canned Food Drive Night. Tickets are available at PPLCenter.com