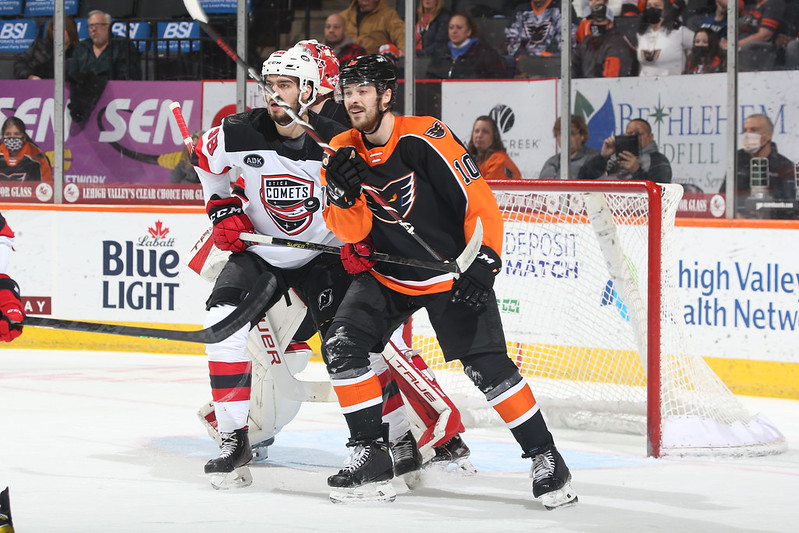 Lehigh Valley, PA – Kirill Ustimenko was sensational in relief of the injured Felix Sandstrom making 20 saves on 21 shots in his 48 minutes on the ice but the Utica Comets eventually broke through on A.J. Greer’s shootout winner in the 4th round for a 3-2 verdict at PPL Center on Saturday night.

Lehigh Valley (17-18-9) secured a vaulable standings point with the shootout loss but the Phantoms were tantalizingly close to the second point via a W as well. Connor Bunnaman was denied on a big blast in the slot in overtime with a strong save by Comets’ netminder Akira Schmid. And Garrett Wilson caught the post on his shot with just a few seconds remaining in the extra period. 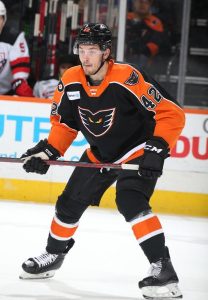 The shootout almost saw a potential winner from Adam Clendening in the second round as the talented defenseman moved right to left across the slot to beat the Comets goalie only to see his blocker-side shot denied on a desperate reach of the paddle that a scrambling Schmid somehow deflected.

The Phantoms struck first just 3:38 into the game on an intercept and breakaway for Charlie Gerard who took the shot himself with a half-stride on the defenseman trying to stay with him up the right wing. Gerard fired it through five-hole on Schmid for a 1-0 lead.

Utica (30-9-5) tied the score with a breakaway goal for teenage first-rounder Alex Holtz (18th) on the breakaway. Sandstrom made the left pad save as Holtz barrelled into him. As the cage was being knocked off the pegs, Holtz pushed the puck, and Sandstrom’s leg, for the goal at 8:55 into the game for a 1-1 tie.

A few minutes later, Sandstrom left the game with an injury and was replaced by Kirill Ustimenko with 3:31 remaining in the first period. “Usti” was sensational and made a number of impressive denials in his stretch including a big left pad save on a one-timer on the backdoor in the second period.

But a somewhat similar one-timer for Nolan Foote (9th) from a cross-ice pass by Bryan Flynn would trickle in off the left pad of Ustimenko at 12:14 into the second period for a 2-1 Comets’ advantage.

Lehigh Valley persevered through 1:33 of a 5-on-3 kill from the end of the second to the beginning of the third period as the highly ranked Phantoms’ penalty kill had some timely pick-offs, kept the Comets to the outside, and successfully maintained the one-goal margin in the key stretch.

The Phantoms equalized on Hodgson’s deflection goal in the slot as the team’s leading goal scorer tipped a line-drive by Egor Zamula from the left point thus guiding it just past the glove of Schmid on the far-post side. Hodgson’s tally was also assisted by recent returnee Connor Bunnaman at 6:23 into the third to forge a 2-2 tie. 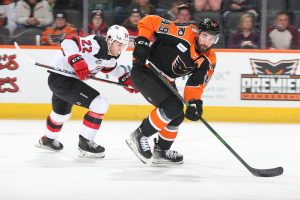 Both teams had some solid chances the rest of the way but Ustimenko and Schmid were on top of their game. Ustimenko went on to make five more saves in an entertaining overtime period followed by three more deflections and denials in the shootout before A.J. Greer finally scored the deciding marker in the fourth round getting Ustimenko moving to his right while elevating a backhander back to the goalie’s left just barely past the reach of his glove.

The Phantoms are 2-2-1 on their longest homestand of the season with one game remaining. They are 1-1-1 against Utica in the season series.

The Phantoms wrap up their homestand on Sunday at 3:05 p.m. against the Atlantic Division leading Springfield Thunderbirds on meLVin’s Big Birthday Bash also featuring $2 hot dog specials through the end of the first intermission.