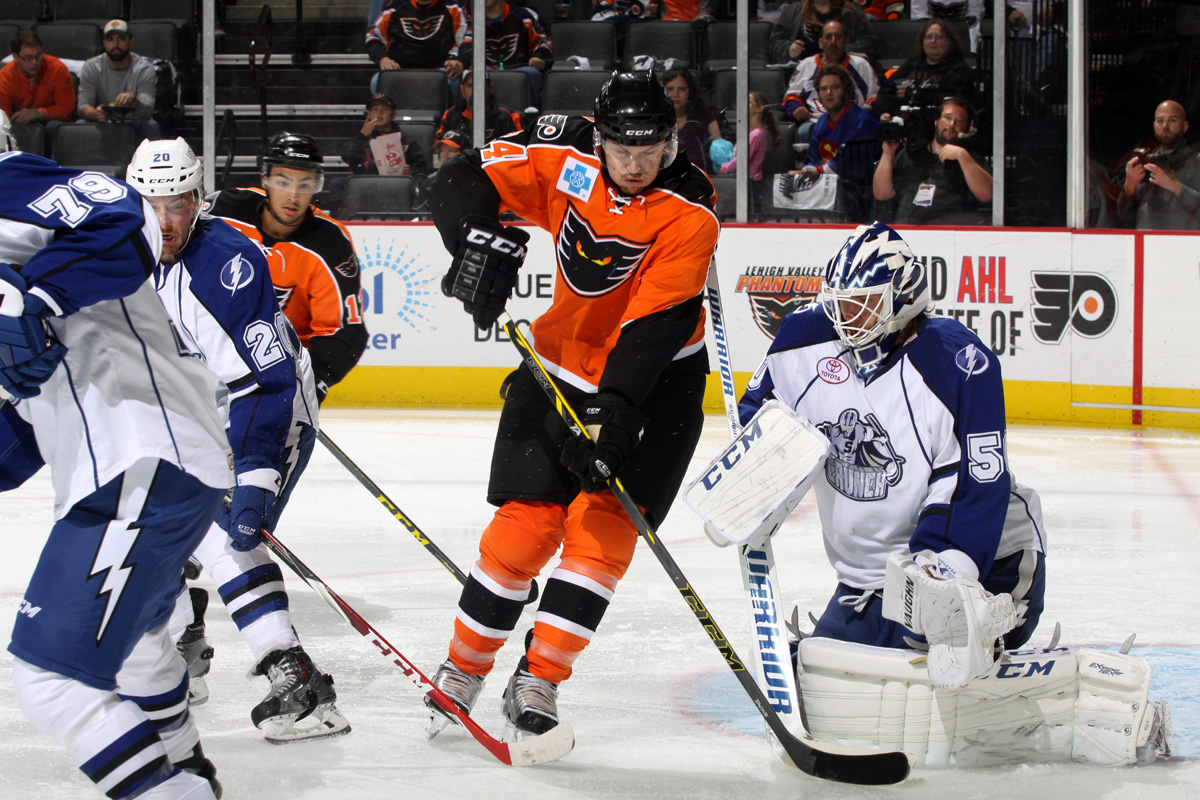 Syracuse, NY – A pair of early strikes for dangerous winger Jonathan Marchessault were able to hold up for the duration thanks to some stellar goaltending by Adam Wilcox as the host Syracuse Crunch held off the late Phantoms comeback attempts in a 2-1 final.

Andrew MacDonald blasted home a power-play goal with 18.3 seconds left in the second period as the Phantoms were surging with their best efforts in the Syracuse zone. But the visitors from Lehigh Valley could not find the equalizer. Wilcox repelled 25 out of 26 Phantoms’ efforts in recording his first pro victory. Other opportunities including a close-range slot scramble backhander by Mark Alt would miss the cage.

Marchessault had his second multi-goal game against the Phantoms with both of his goals coming in the first period. Yanni Gourde received credit for helpers on both of the goals.

Despite the end-result, second-year pro Anthony Stolarz came through with a fine effort in goal and made a number of dazzling stops to keep the Phantoms in the game when they were still trailing by two and the Crunch were threatening to extend their advantage. Stolarz turned away 29 out of 31 Crunch drives.

The Phantoms were out shot badly to begin the second period with Syracuse holding a 9-1 avantage. But Lehigh Valley turned the tables on the Crunch in the closing minutes of the second period with a 10-1 shot disparity including MacDonald’s momentum-lifting power-play strike in the closing seconds with assists to Shayne Gostisbehere and Tim Brent.

The Phantoms penalty-kill effort went 4-for-4 to improve their weekend numbers to 10-for-10. After some off-nights while trying to find their stride and learn their new system, the Lehigh Valley penalty-kill efforts have shown vast improvement in recent nights.

Robert Hagg returned to the Lehigh Valley lineup after taking an injury in the second game of the season on October 16 at Springfield. The second-year pro defenseman from Sweden didn’t appear to have missed a beat and even had a big blast that narrowly missed tying the score with about four minutes left in the third period.

Jesper Pettersson joined the forwards up front for his first game as a winger this season. Normally a defenseman, Pettersson made a couple of nifty plays in the SYracuse zone including a shot on the rush from the left circle that handcuffed Wilcox and almost led to a goal. The undersized “Pit Bull” also had a couple of tries getting into the slot on physical scrambles.

The game was the second of four encounters between the Phantoms and Crunch. Lehigh Valley returns to center New York on March 1st. Syracuse provided the opposition at PPL Center on Opening Night, October 10. They don’t return until the last contest of the season with an April 18th rematch in Game #76.

Lehigh Valley returns to PPL Center on Sunday at 5:05 to tangle with the Binghamton Senators in the conclusion of the team’s “three-in-three” weekend. Binghamton’s captain is former popular Phantoms tough-guy Zack Stortini. Sunday’s game also features a “Go Birds” tailgate with the Eagles Cheerleaders on hand to drive the crowd. Tickets for Sunday’s home game are available at PPLCenter.com or by calling 610-347-TIXX (8499).