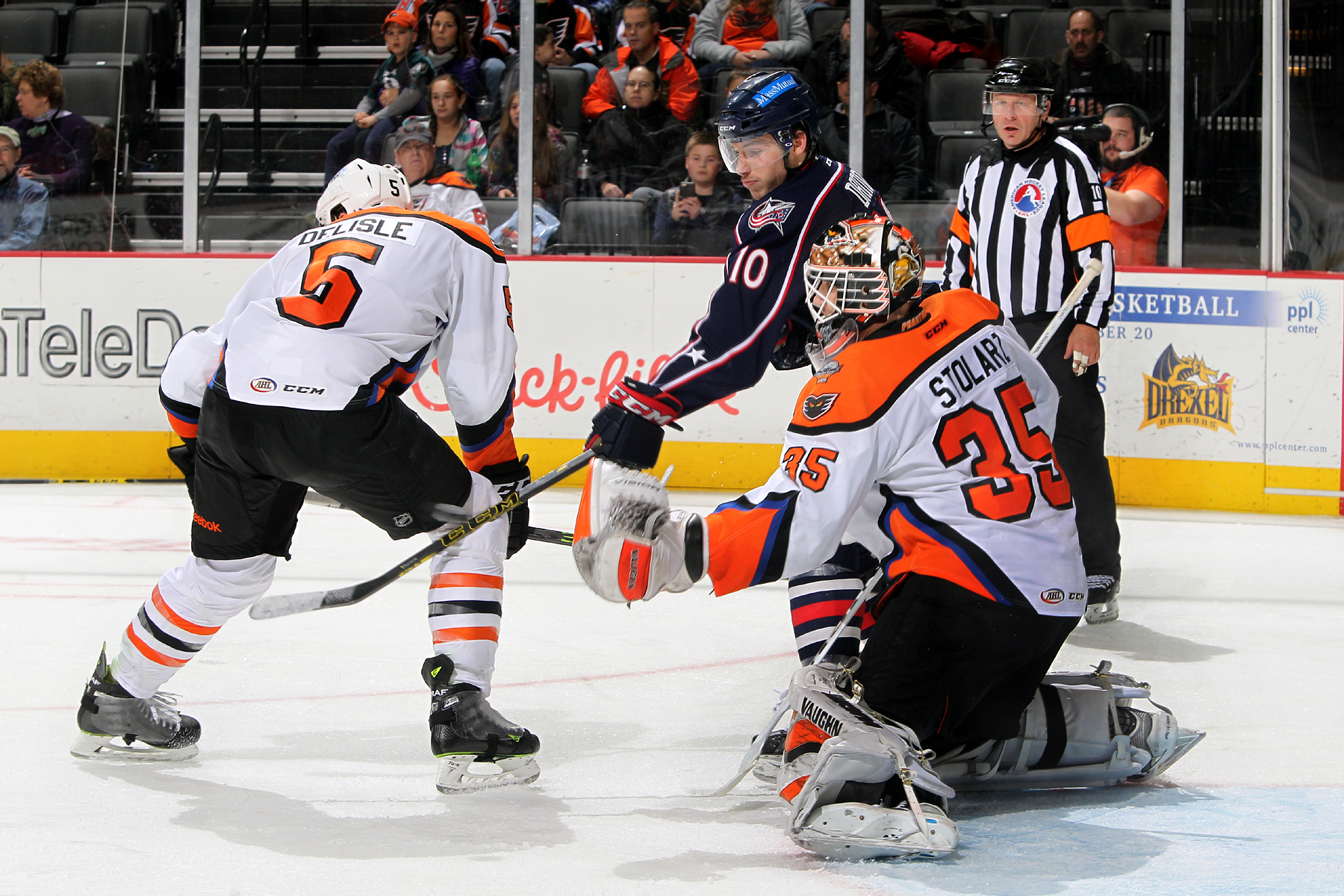 Down 3-0 entering the third period, the Phantoms scored twice in the final frame and were peppering the Springfield Falcons goal in the game’s final minute but just couldn’t find the equalizer as the visitors escaped with a 3-2 win in front of 6,630 fans at PPL Center Wednesday evening.

“I said to the team after the second period we gotta go find a game here,” said Phantoms head coach Terry Murray. “We’ve got two games coming up Friday and Saturday, you gotta get a game going here tonight and take it into the weekend. So the compete level was better. We got a push from everybody and we had some good offensive zone time. So you make it interesting at the end but the clock runs out.”

The setback capped an extremely productive season-high five-game home stand for Lehigh Valley who went 3-1-1 during the home set earning seven of a possible 10 points over the last five games. The Phantoms lost in regulation on home-ice for only the second time in nine total games this season and are now 5-2-2 at home and 8-7-2 overall. The Phantoms also had their four-game point streak come to a close while the Eastern Conference front-running Falcons won their seventh in a row.

The Phantoms established a physical tone with the game’s opening shift when the starting trio of Nick Cousins, Petr Straka and Zack Stortini used active sticks and a willingness to finish their checks to wreak instant havoc in the Springfield zone. The pressure created a scoring opportunity right out of the gate for Lehigh Valley but Falcons netminder Anton Forsberg was up to the early challenge. Then it was Phantoms’ goaltender Anthony Stolarz’s turn as Springfield worked a puck into the slot six and a half minutes into the contest, which was promptly snapped on goal by Sean Collins and just as quickly swallowed up by Stolarz.

The AHL affiliates of the Columbus Blue Jackets opened the scoring just past the midway point of the first period when, while on the power play, Michael Chapul worked a puck to the right goal line that was stashed by Mike Hoeffel into an open space in the upper right hand corner of the goal not much bigger than the puck itself. Nathan Oystrick grabbed the secondary assist on the man-advantage marker netted 10:02 into the opening period. The goal marked just the first time in four games that Lehigh Valley had allowed the game’s first goal and was the first goal allowed by Stolarz in 80:10 of game action after the rookie netminder posted a 4-0 shutout against the Worcester Sharks last Friday.

The Phantoms shrugged off the conversion and went right back to work as the Cousins, Straka and Stortini line orchestrated a punishing forecheck shortly after the goal, which generated chaos at the Springfield net front that had to be answered by Forsberg.

The Falcons doubled their lead a little over four minutes into the second stanza when a point shot by Thomas Larkin produced a rebound at the top of the Phantoms goal crease that was pounced on by Trent Vogelhuber for his first goal of the season. Jerry D’Amigo earned the second assist on the even strength strike tallied 4:01 into the middle period.

Springfield increased its lead to a 3-0 advantage just before the close of the second frame when a right point snap shot by Jamie Sifers rattled off the left elbow of the Lehigh Valley goal before bouncing over the goal line. The unassisted five-on-five tally came 17:35 into the middle stanza.

But the Phantoms weren’t going to go down without a fight. Literally.

Manning brought the crowd at PPL Center to its feet early in the third period when he dropped the gloves with Springfield’s Kerby Rychel. The scrap was Manning’s second of the season and Lehigh Valley’s 16th as a team this season. The fisticuffs not only sparked the Phantoms faithful in attendance but it also sparked the players on the ice.

Less than two minutes after the fight, Steven Delisle launched a left point blast while on the power play that found daylight past Forsberg. The goal was Delisle’s first of the season and first conversion since March 9th of last year. Nick Cousins collected his team-leading 13th point of the year with the primary assist while Robert Hagg grabbed his ninth assist and 11th point of the season with the secondary helper. The man-advantage marker came 5:36 into the third period.

But the Phantoms weren’t done there.

With just over a minute left in regulation, Lehigh Valley connected on the power play again.

This time it was Taylor Leier who snapped a perfect wrist shot from the right wing through a Stortini screen at the front of the Springfield net and past Forsberg moving the Phantoms to within just a single tally and sending the Phantoms fans into a frenzy. Manning extended his points streak to a season-high six games with the primary assist on the man-advantage marker while Blair Jones collected his fourth point in four games since joining the Phantoms.

Despite a last minute flurry, Forsberg and the Falcons were able to stave off Lehigh Valley’s frantic comeback as Springfield extended its winning streak to seven consecutive games.

Forsberg earned the victory for the Falcons with 23 saves on 25 Phantoms shots. Meanwhile, Stolarz notched his fourth 30-plus save performance with 31 denials on 34 Falcons offerings.

The Phantoms power play got back on track Wednesday evening as Lehigh Valley connected twice in four man-advantage opportunities. Meanwhile, Springfield was 1-for-3 on the power play in Wednesday’s tilt.

The game was Springfield’s lone visit to PPL Center in 2014-15. The Phantoms will return the favor on February 15 when they travel to western Massachusetts for a rematch.

The Lehigh Valley Phantoms return to action this Friday when Lehigh Valley travels to Boardhalk Hall in Atlantic City for a showdown with the Albany Devils. Then, the Phantoms return to PPL Center this Saturday when they welcome the Norfolk Admirals to town for the first time this season. Saturday’s contest features a FREE team poster giveaway for all fans along with a post-game autograph session with the Phantoms players. Tickets for Saturday’s highly anticipated showdown are available now at the Mealey’s Furniture Box Office at PPL Center (701 Hamilton), by calling 610-347-TIXX (8499) or online at pplcenter.com.

Phantoms fans can receive a 10% discount on all Phantoms merchandise this Friday and two store locations. Shop for your favorite Phantoms fan at the arena souvenir and merchandise store located just inside the Tim Horton’s entrance at PPL Center or visit the team’s new kiosk store location now open at the Lehigh Valley Mall.