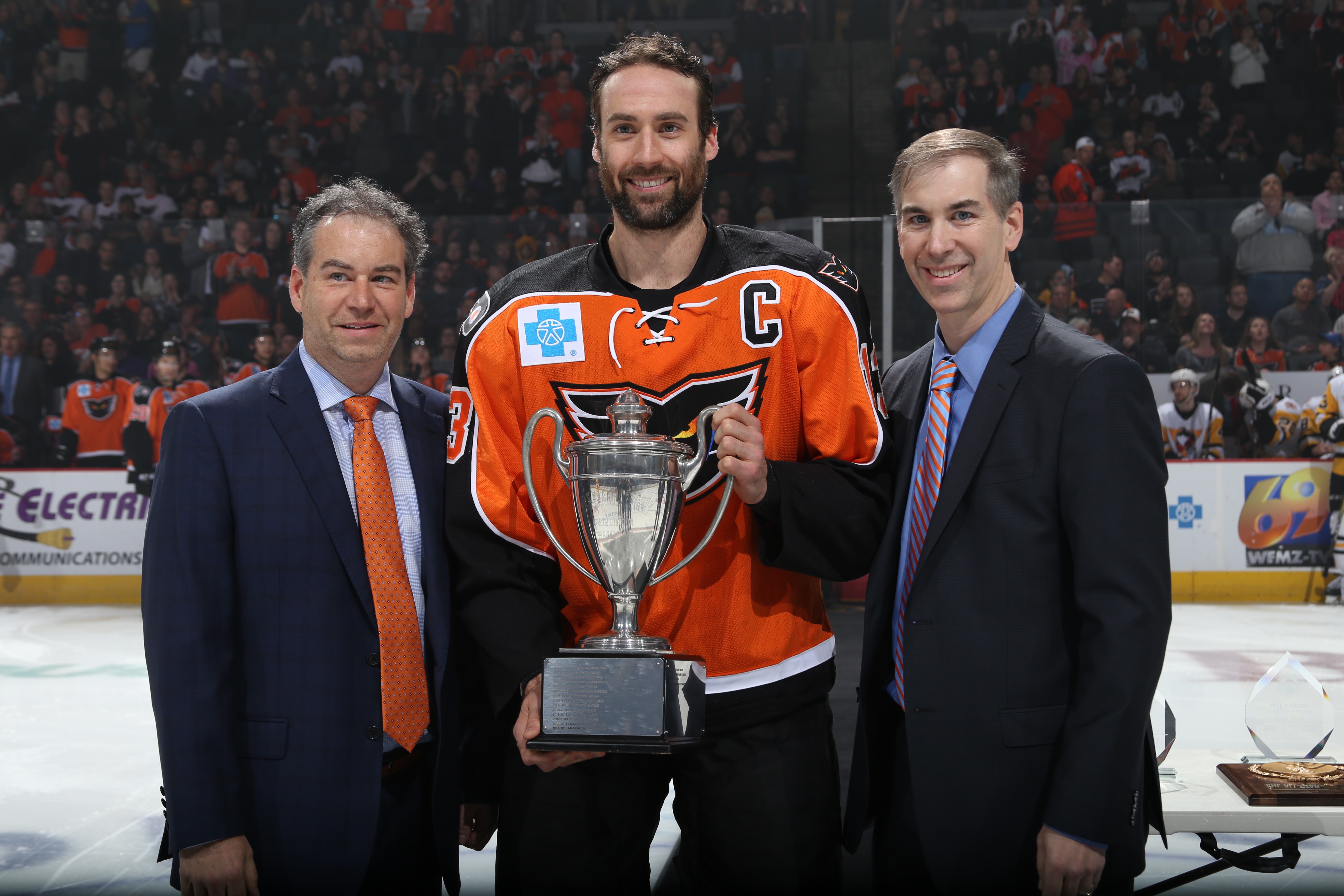 Lehigh Valley, Pa. – Alex Lyon turned in a stellar 26-save performance and Nic Aube-Kubel netted the game winner in the shootout as the Lehigh Valley Phantoms earned a come-from-behind 2-1 victory over the rival Wilkes-Barre/Scranton Penguins Saturday evening in front of 8,643 fans inside PPL Center. 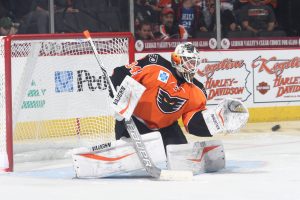 With the win, the Phantoms capped the 2017-18 regular season with an overall record of 47-19-5-5, which produced the American Hockey League’s second-highest standings points total this year (104). The 104 points are the most by the Phantoms since the AHL switched from an 80-game schedule to a 76-game slate and are the most points produced by the team since the Philadelphia Phantoms tallied 105 points during the 1998-99 campaign.

The Atlantic Division Champions are still awaiting their first round playoff opponent and will be actively watching the AHL scoreboard as the Providence Bruins host the Springfield Thunderbirds Sunday at 3:05 p.m. before the Charlotte Checkers close their regular season with a 5:00 p.m. tilt at the Bridgeport Sound Tigers. With a point in Saturday’s contest, Wilkes-Barre Scranton clinched the #2 seed in the Atlantic Division meaning Lehigh Valley will face either Providence or Charlotte in the opening round. 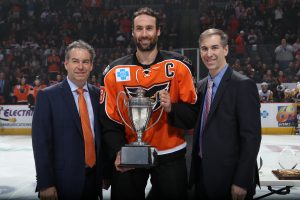 Saturday’s victory also continued the team’s stellar play at home as Lehigh Valley captured its seventh straight win at PPL Center in ending the regular season with a league-best 27 home wins. What’s more, Saturday’s win was the club’s 17th over its last 20 home games as the Phantoms have gone a sensational 17-1-2 in downtown Allentown since January 13.

Chris Conner (17th) tallied the lone goal in regulation for the Phantoms in front of Lyon who earned his seventh straight victory between the pipes for Lehigh Valley. With Saturday’s win, Lyon improved to 16-8-2 overall this year while Conner’s goal was his 121st career point with the Phantoms. 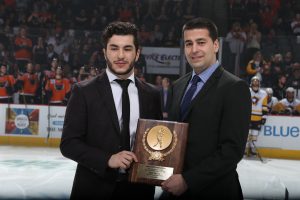 Before the puck even dropped Saturday evening, Phantoms fans had a chance to cheer as forward Phil Varone and defenseman T.J. Brennan were recognized for their outstanding seasons. Varone was presented with the Les Cunningham Award as the AHL’s most valuable player along with a trophy for being named to the AHL’s First All-Star Team while Brennan was presented with a trophy for being named to the Second All-Star Team. What’s more, captain Colin McDonald along with Phantoms’ co-owners/governors Rob and Jim Brooks were presented with the Emile Francis Trophy as 2017-18 Atlantic Division Champions.

Neither side found the back of the net in the opening period despite a combined 15 shots on goal. Lyon turned aside the five Wilkes-Barre/Scranton offerings he faced in the first period while Penguins’ goaltender Michael Leighton answered each of Lehigh Valley’s 10 shots in the opening frame. 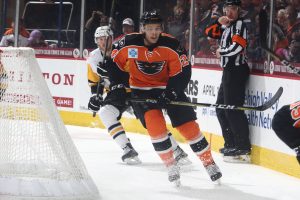 After a scoreless middle stanza, the Penguins broke the scoreless deadlock with just under two minutes left in regulation when Garrett Wilson jammed the puck under the pad of Lyon and into the Lehigh Valley cage for his 17th tally of the year. Chris Summers and Daniel Sprong assisted on the even-strength strike netted 18:10 into the third period.

The resilient Phantoms didn’t back down though and leveled the contest in the final minute of regulation when Will O’Neill set up Conner on the door step who slammed home his 17th goal of the year. O’Neill and McDonald assisted on the equalizing marker scored 19:14 into the final frame.

Lyon then turned aside all four Wilkes-Barre/Scranton attempts in the shootout before Aube-Kubel capped the come-from-behind victory with a dazzling conversion on Leighton. The Penguins’ netminder closed the evening with 30 total saves.

The Phantoms finished the regular season an impressive 19-4-10 in one-goal games this year.