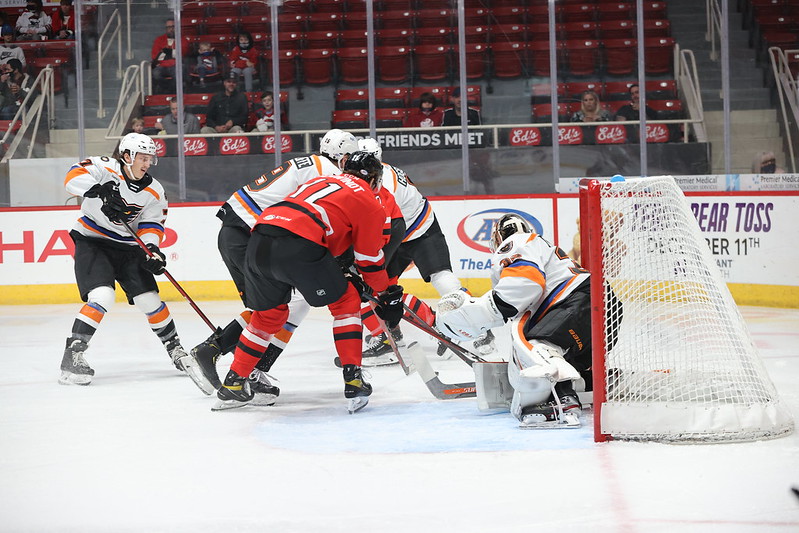 Charlotte, NC – The Lehigh Valley Phantoms bounced back in their weekend series at Charlotte with a 5-3 win over the Charlotte Checkers on Sunday afternoon to earn a split of the two-game set. Egor Zamula scored his first in the AHL while Cam York scored his first of the season. Adam Clendening led the attack with three assists while Morgan Frost added a pair of second-period helpers.

The Phantoms have won two of their last three games. After building a 4-1 lead by the early seconds of the third period, Lehigh Valley had to hang on as Charlotte answered with consecutive goals before the 5:00 mark of the third to trim the Phantoms’ lead to 4-3. Garrett Wilson essentially sealed the deal with an empty-netter with just under five minutes left on an unselfish play by Morgan Frost dishing it to his linemate for the better angle on net. 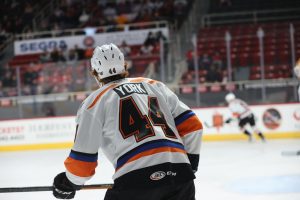 Hayden Hodgson scored his third in the last five games while Max Willman made it consecutve games with a power-play goal in the Lehigh Valley triumph.

Felix Sandstrom was especially strong in his third straight start with 34 saves on 37 shots including 14 denials to survive the Charlotte surge in the third period and preserve the win for the Phantoms.

Cole Schwindt opened the scoring for Charlotte on a set up from Phantoms alum Carsen Twarynski for a 1-0 lead for the Checkers just over seven minutes into the contest.

But the Phantoms equalized with Adam Clendening continuing momentum from a recently expired power play. His drive from beneath the left dot was denied but ultimately led to Linus Hogberg’s center-poiont drive that was tipped in by Hodgsen (3rd) in the slot at 10:26 of the first to forge a 1-1 deadlock.

Lehigh Valley took the lead with consecutive similar-style goals from their left defensemen. Cam York at 6:21 carried from the left point almost to the dot to snap home his first of the year for a 2-1 lead. Logan Day slid the puck over to him while the Checkers defense was top-heavy on the oter side of the ice. Max Willman earned a secondary assist winning the puck along the right-wing halfwall with help from Cal O’Reilly in the puck-battle. 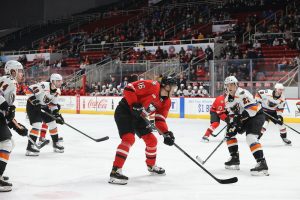 Six minutes later it was Egor Zamula similarly finding open ice  inviting him to step up after a point-to-point pass from Adam Clendening. Zamula blasted home his first professional goal in North America for a 3-1 lead.

Sandstrom had scrambled to his right with a spectacular backdoor denial on Max Zimmer on a 2-on-1 to preserve the lead. His blocker save might have been his best of the evening.

Lehigh Valley pushed it to 4-1 in the opening minute of the third period on a snipe from the slot by Max Willman off the right post. Morgan Frost whipped the puck from the right boards after Adam Clendening connected with him up ice.

The Phantoms appeared to be in charge but the Checkers quickly responded with goals just over two minutes apart. Connor Carrick scored from the left circle off the far post for a power-play conversion and then Scott Wilson buried one on the backdoor from beneath the right dot after Gregori Denisenko rushed in behind the goal and around to the other side on a goal where Sandstrom had almost no chance for a stop.

After it became a one-goal game, the Checkers smelled blood and kept on the attack as they pushed for the equalizing goal. On one sequence, the puck worked over to the left of the cage on a rebound while Sandstrom was pulled over to the other side. Defenseman Linus Hogberg got back in time to cover the space and make his own big save to keep the Phantoms on top.

Lehigh Valley had to push through consecutive penalty kills in the third period as well but Sandstrom and the rest of the team rose to the occasion. Eventually, Garrett Wilson scored the empty-netter with under 2:00 left to finish the win. German Rubtsov hit the post with about a minute to go on an empty-net attempt that would have made it six goals for the Phantoms.

The Phantoms road-swing continues on Wednesday night at the Hershey Bears and on Friday at the Providence Bruins. The Lehigh Valley Phantoms return to PPL Center on Saturday against the first-place Springfield Thunderbirds with the return of the Saturday Night Hockey Live concet series featuring Stacy Gabel performing between periods. Tickets are avilable at PPL Center.com