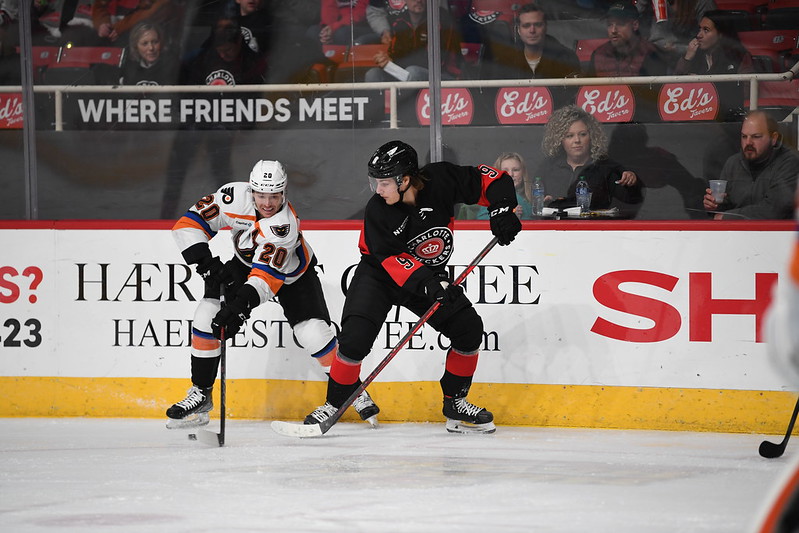 Charlotte, NC – Jackson Cates rushed down ice for a shorthanded breakaway strike for his first career professional goal and Isaac Ratcliffe and Max Willman contributed lamplighters as well but it wasn’t enough to stop the Charlotte Checkers’ attack in a 7-3 decision on Saturday night.

Veteran Zac Dalpe led Charlotte with a pair of power-play goals. Aleksi Heponiemi posted one goal and two assists. And Alex True had a shorthanded breakaway goal for his team-leading fifth of the season.

Charlotte came out flying with three goals in the first ten minutes of the game aided by a five-minute major power play on a Hayden Hodgson charging major and game misconduct.

Luke Henman, Zac Dalpe (PP) and Logan Hutsko all scored against Felix Sandstrom to start the contest. Hutsko’s goal came against a Phantoms team that had just killed the remainder of the five-minute major.

Isaac Ratcliffe scored his first of the year on a goal down low assisted by Egor Zamula and Garrett Wilson.

But Phantoms’ alum Carsen Twarynski responded just 23 seconds later with his blast from the left circle after Cole Schwindt carried in deep and wheeled behind the goal to find the Seattle Kraken expansion-draft pickup from the Flyers for the one-timer.

Jackson Cates used an active stick at the blue line to steal a puck and race down ice for a shorthanded breakaway goal. Cates’ first as a pro was the team’s second shorthanded marker of the season and again pulled the Phantoms to within two goals at the first intermission at 4-2.

Charlotte made it 5-2 with their own shorthanded breakaway goal with Alex True taking advantage of a Phantoms’ turnover to streak down ice and score five-hole on Felix Sandstrom.

Lehigh Valley again closed the margin with Max Willman’s rebound power-play goal in the slot with 8:15 remaining in the second period to make it a 5-3 score. Egor Zamula’s center-point blast off the pads of Charlotte goalie Joey Daccord provided the putback opportunity for Willman’s third of the year.

But Charlotte was quick to answer again this time with Aleksi Heponiemi with an opportunity to find the back of the net.

A puck slid over to Dalpe in the right slot on the power play was good for the team’s seventh goal of the night to close the scoring.

The Phantoms had the better of the play in the third period outshooting the Checkers 13-4 but Daccord stood tall to each oppportunity.

Felix Sandstrom played the first 40 minutes and allowed all seven goals. Kirill Ustimenko entered in relief in the third period and stopped all four shots he faced.

The Phantoms and Checkers rematch on Sunday at 1:00 p.m. at Bojangles’ Coliseum.

The next home game for the Lehigh Valley Phantoms is Saturday, November 13 against the Springfield Thunderbirds with the return of the Saturday Night Hockey Live concert series featuring Stacy Gabel. Tickets are available at PPLCenter.com