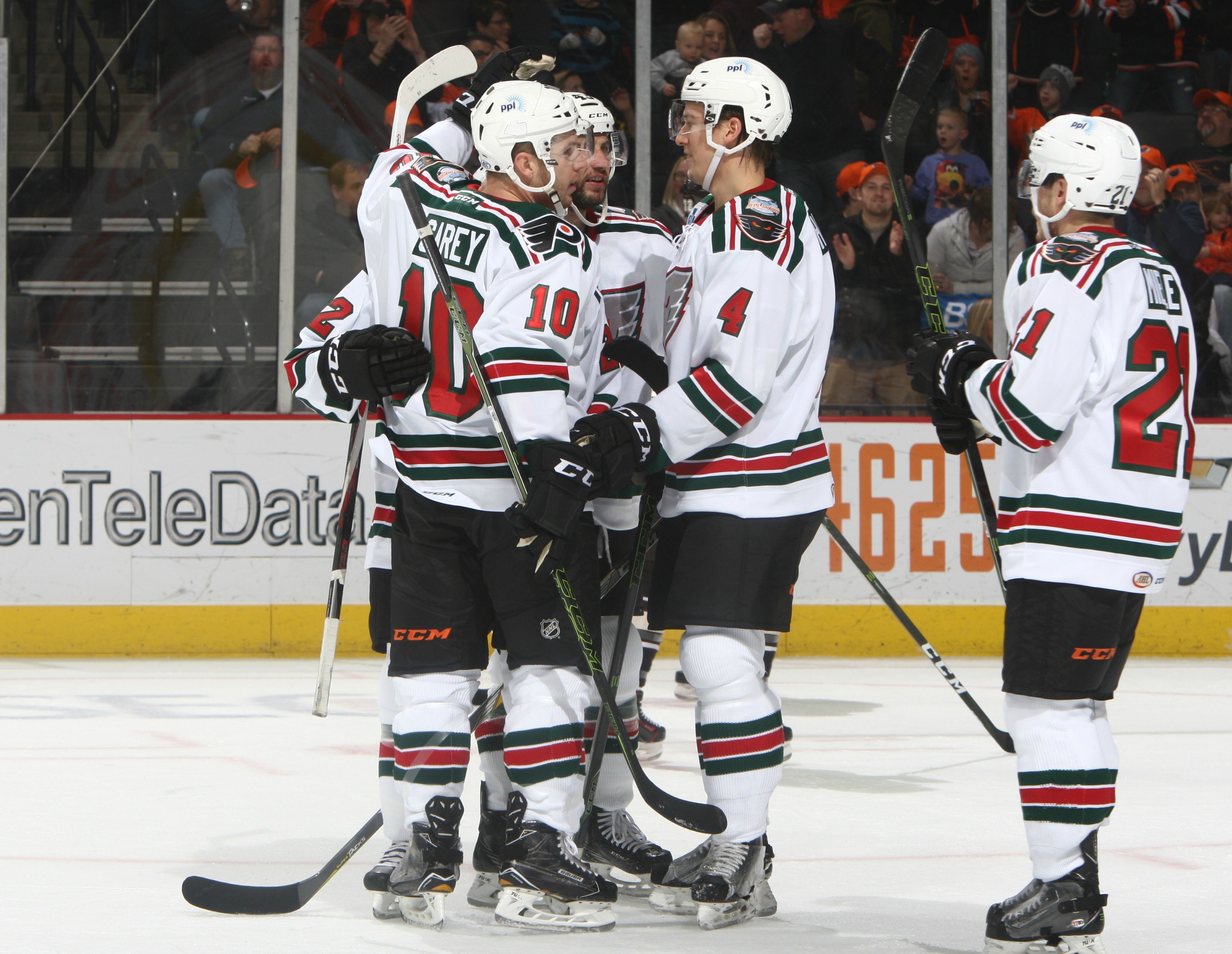 7-1 Rout: Will O’Neill with 4 Assists and Danick Martel with 2 Goals

Lehigh Valley, PA – The Lehigh Valley Phantoms were the first team in the American Hockey League to reach 20 wins as well as 100 goals scored and concluded play before the Holiday Break in the most impressive way possible with a 7-1 rout of the Providence Bruins on Saturday night at PPL Center. The Phantoms have gone a perfect 5-0 in their mid-December homestand. Danick Martel scored a pair of goals and came very close to a hat trick on multiple occasions. Will O’Neill notched assists on each of the first four goals scored by the Phantoms.

Other Phantoms to tally in the big win included Greg Carey (14th) who entered into a tie for the league lead in lamplighters with Nick Baptiste of Rochester. Chris Conner (7th), Scott Laughton (3rd), Travis Sanheim (4th) and Colin McDonald (12th) all found the back of the net past a frustrated Malcolm Subban. Not to be overlooked was a splendid performance from rookie goaltender Alex Lyon who racked up 33 saves in notching his AHL-leading 13th win of the season. It was Lyon’s 15th start in the last 16 games since assuming #1 goalie honors on November 13 following the Philadelphia call-up of Anthony Stolarz.

The Phantoms were again sporti 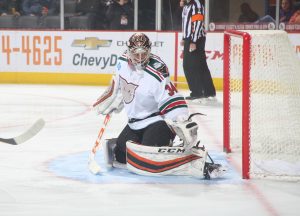 ng their lucky Holiday Themed jerseys. The ultra-snazzy red, green and silver sweaters finished their run with an undefeated 2-0 mark and were auctioned off to the fans after the game with Phantoms players personally presenting the shirt right after their backs to the winning bidders.

Providence entered the Saturday night engagement as one of the hottest teams in the league. The Bruins had a 13 game point streak (9-0-4) and a five game win streak and had not lost in regulation in over a month. But the Phantoms roared out to an impressive and high-energy start and barely looked back from there. The team came out flying with a mindset of “emptying the tank” and giving everything they might have remaining in their last game before a nine-day layoff prior to returning to action against Hershey on the day after Christmas.

Will O’Neill connected with Danick Martel midway through the first period for a 1-0 lead after 20 minutes on an impressive goal that was more reminiscent of baseball than hockey. O’Neill’s line-drive from the left point was swung on in the mid-slot by wheeling Martel about waist-high and he got enough of it for a knuckler over the waving glove of Subban into the upper-right ninety.

Providence was pressuring at the end of the frame and almost banked one in with a couple minutes left. While Jordan Weal was drawing ooh’s and aah’s on his hard hip-check that sent Peter Cehlarik flying, Chris Breen was teeing up a slapper from left point that was tipped down low by Jordan Szwarz. The redirection eluded Lyon to the far post behind his left skate and bounced right back out off the back of Lyon but somehow missed pinballing into the cage.

Martel’s second goal of the night and seventh of the campaign came five minutes into the second period from the left of the cage after a neat backhand flip from behind the net by Mark Zengerle connected smartly with the second-year winger while catching Subban peeking the other way. O’Neill assisted on that lamplighter as well.

Chris Conner notched his seventh of the season converting in the slot to beat Subban with another assist credited to O’Neill as well as to Andy Miele.

Just nine seconds later, at 12:31 into the second, Providence responded on a quick strike by Peter Cehlarik unassisted for his 13th goal of the season, most among AHL rookies. that would prove to be one of the few highlights of the night for the visiting Bruins.

The Martel and Conner conversions in the second period came immediately after expired power plays and were a result of continued pressure wearing down the Providence skaters who were unable to achieve critical clearing plays. Sanheim was particularly responsible for the Conner goal showing some nifty hands with a hold at the blue-line just as Providence thought they were going to have a chance to breathe. But once they were backed in and were still unable to change after two full minutes of continuous Phantoms pressure, the end result of a goal was virtually inevitable.

Greg Carey quickly offered a snapper from the left circle at 15:00 to light the lamp for the second game in a row and for the 14th time this season. O’Neill yet again helped set up the play for his fourth helper while Miele notched his second as the Phantoms enjoyed a 4-1 advantage at the second break.

Lehigh Valley again scored immediately after the conclusion of a power play to open the third period. Scott Laughton carried wide around the Providence cage to the right circle and falling away was able to snap home his third of the season over the glove of Subban just 12 seconds into the period and just two seconds after the Bruins had a man barely step foot back onto the ice from the penalty box.

A sequence of rebounds almost led to the celebration of a potential Martel hat trick at almost nine minutes into the third. A kick from a defenseman and then a denial by Subban thwarted Martel’s first two efforts on the rush but the bouncer came back out to Sanheim whose first opportunity was also repelled but the fourth try on that push was the charm and Sanheim reached across for the pick up of his own blocked shot and was able to lift one past the blocker of Subban. Sanheim’s fourth of the season was the Phantoms’ sixth of the night at 8:44 into the third period.

Sanheim has scored all four of his goals on the five games of the homestand having just picked up his first of the year last Friday in the homestand opener against Rochester and then adding two more in the first period on Wednesday in the wild 8-6 win against Bridgeport.

The captain would cap the scoring at 12:25 of the third after a faceoff win from Scott Laughton and a nudge forward from Max Lamarche. Colin McDonald, from just inside the right point, would offer a long snapper that somehow eluded Subban over the glove making it an even dozen goals on the season for the winger who a decade earlier had played his collegiate hockey in Rhode Island for the Providence College Friars.

Cole Bardreau was sprung free on a breakaway and Danick Martel had a couple of cracks again to try to build on the already huge margin but the Phantoms would have to settle for the 7-1 victory. The team reached at least seven goals for the third time this season and the second time in the last three games.

The six-goal margin of victory was the most for the Lehigh Valley incarnation of the Phantoms franchise equaled by a similar 7-1 thrashing of the Rochester Americans on November 13, 2015 in what was the last game in a Phantoms sweater for Shayne Gostisbehere who was called up to the Flyers after the contest.

The Phantoms improved their overall record to 20-7-1 and are also 18-4-0 in their last 22 games encompassing all of November and December. Lehigh Valley again cranked up the shot total and won that department over Providence 39-34. The Phantoms were officially 0-for-5 on the power play but realistically scored three of their goals as a direct result of sustained power-play pressure with the tally itself just happening to come mere moments after the man-advantage had technically barely expired.

Lehigh Valley now enters a nine-day stretch without a game as part of their Holiday Break. The Phantoms return to action on Monday, December 26 in a rematch against the Hershey Bears in an increasingly heated rivalry. that game represents the last PPL Center contest of the 2016 calendar year for the Phantoms. A limited number of tickets remain for the December 26th game and can be purchased by clicking HERE.