Captains for the American Hockey League All-Star teams are selected by the league president in recognition of their outstanding leadership and service. 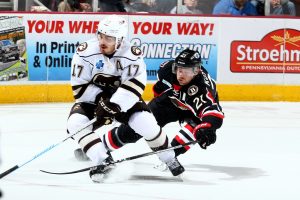 Chris Bourque is the AHL’s career scoring leader among active players with 604 points (208 goals, 396 assists) in 610 games with Hershey, Hartford, Providence and Portland, including 25 points in 28 games this season. The 12th-year pro has captured two AHL scoring titles (2012, 2016) and was named league MVP for the 2015-16 regular season. A 30-year-old Boston native, Bourque also ranks among the AHL’s all-time playoff leaders with 78 assists (second) and 107 points (fifth) in 121 postseason games played (fourth), winning three Calder Cup championships (2006, 2009, 2010) in five trips to the Finals and earning MVP honors for the 2010 postseason. Bourque, who has also skated in 51 National Hockey League contests with Washington, Pittsburgh and Boston, has been a First Team AHL All-Star selection three times and will be making his fifth career AHL All-Star Classic appearance. 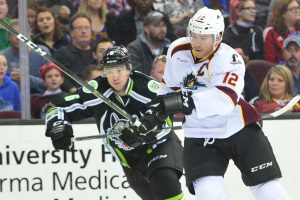 Ryan Craig is in his 14th pro season and ninth as an AHL team captain, serving in that role with Springfield, Norfolk and Wilkes-Barre/Scranton before the last two years in Cleveland. Captain of the Monsters’ Calder Cup championship team in 2015-16, Craig has skated in 667 AHL games and totaled 165 goals and 181 assists for 346 points in his career, with four goals and four assists in 27 games for the Monsters in 2016-17. The 34-year-old native of Abbotsford, B.C., is also a two-time winner of his team’s IOA/American Specialty AHL Man of the Year award, and has appeared in 198 National Hockey League contests with Tampa Bay, Pittsburgh and Columbus. This will be Craig’s first trip to the AHL All-Star Classic.