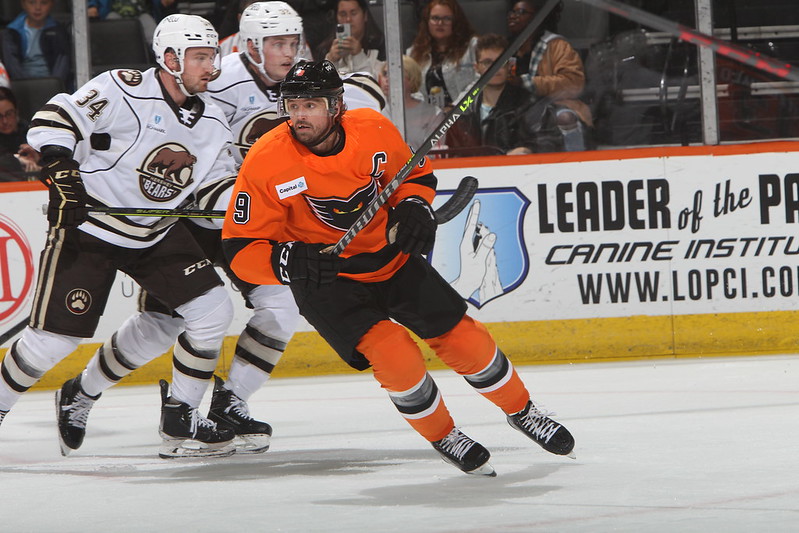 Lehigh Valley, PA – Tyson Foerster scored on a breakaway and Jordy Bellerive converted at the net front and later dropped the gloves as part of an exciting 2-1 preseason victory over the Hershey Bears on Saturday evening at PPL Center. The home fans were getting their first look at this year’s Phantoms and the boys did not disappoint.

Ian Laperriere’s lineup for the team’s second preseason game overall appeared to be very close to the lineup we might expect for the Phantoms when they take the ice for real during Opening Weekend October 22-23. The Philadelphia Flyers still have some roster moves to make which means that, from this point, the Phantoms team will only get stronger. The night marked the first preseason action for several of the Phantoms players including Cal O’Reilly, Garrett Wilson, Ryan Fitzgerald and others. It also represented an opportunity to see some talented newcomers in a Phantoms jersey for the first time including Adam Brooks, Louie Belpedio, and the new fan-favorite, Jordy Bellerive, who certainly made quite an impression. First-rounders Tyson Foerster and Cam York suited up for this one as well as other exciting prospects such as Elliot Desnoyers, Zayde Wisdom, Olle Lycksell, and more.

Tyson Foerster scored on a breakaway early in the second period and Jordy Bellerive potted a net-front goal a few minutes later to provide the Phantoms all the scoring they would need in front of an enthusiastic PPL Center contingent obviously hungry for the return of Phantoms hockey. 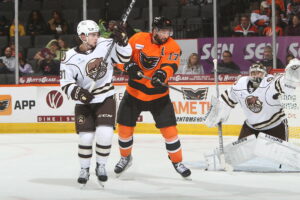 The Bears got off to the better start in this game with an 8-1 shots advantage. Although the shot count was perhaps a little deceiving as many of Lehigh Valley’s shot attempts were simply missing the net. The Phantoms later found their shooting touch and began pressuring goaltender Hunter Shepard a bit more with some close-range chances.  Max Willman and Cooper Zech emerged with a 2-on-1 that was denied twice by Shepard. First, he barely got a glove on a Willman drive aimed for the upper-right corner. Then the rebound on the doorstep was almost deposited by Zech but Shepard denied his with the left pad to keep the game deadlocked at 0-0.

Elliot Desnoyers would later race away on a shorthanded breakaway, his second of the weekend. And the crafty and skilled 20-year-old found other occasions to display his terrific potential in his professional debut season.

Zech would strike again and help set up the first goal of the preseason for Lehigh Valley when he offered a long stretch-pass to an awaiting Tyson Foerster who was wide open at the opposite blueline and somehow unnoticed by the Bears’ defenders. Foerster’s powerful blast on his breakaway appeared to be stopped by the stick of Shepard but still had enough to make it into the cage for a 1-0 lead.

Six minutes later, it was Wyatte Wylie setting up a goal for the second time on the evening when he got to a puck on the right half-wall and took it to the corner. Wylie found Isaac Ratcliffe on the other side of the net and behind the goal-line who quickly connected with Bellerive in the low slot. Bellerive got enough on his shot to beat Shepard for a 2-0 lead.

Ethan Frank countered for the Bears with under two minutes remaining in the middle period with a breakaway goal of his own beating Pat Nagle to the glove side following a long pass by Mason Morelli.

Bellerive thrilled the crowd yet again when he dropped the gloves with Morelli in the game’s closing minutes. The two eventually untangled themselves and threw some strong punches in the feisty bout. Bellerive was one of the tougher customers on the Wilkes-Barre/Scranton Penguins for the last three seasons and led his team with 112 penalty minutes last year. Now he brings his energetic style to the Lehigh Valley side of the rivalry and got to enjoy the thrill of a curtain call as the game’s #1 Star. 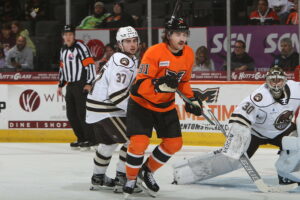 Tyler Wall took over between the pipes for the Phantoms in the third period and stopped all five Hershey chances. The Bears pulled their goalie with one minute remaining after some unsuccessful attempts to get their extra ttacker out there. But a couple more tipped passes and blocked shots got the Phantoms to the finish line of their first preseason victory.

The Phantoms conclude their preseason slate on Wednesday night against the Wilkes-Barre/Scranton Penguins with a 7:05 p.m. engagement at PPL Center. Lehigh Valley opens the regular season on Saturday, October 15 at 6:05 p.m. at Wilkes-Barre/Scranton and continues their 2022-23 campaign-opening road trip on Sunday, October 16 at 3:00 p.m with a game at the Hershey Bears.

Opening Weekend for the Phantoms at PPL Center features a pair of games against the Cleveland Monsters on Saturday, October 22 at 7:05 p.m. and Sunday, October 23 at 3:05 p.m.