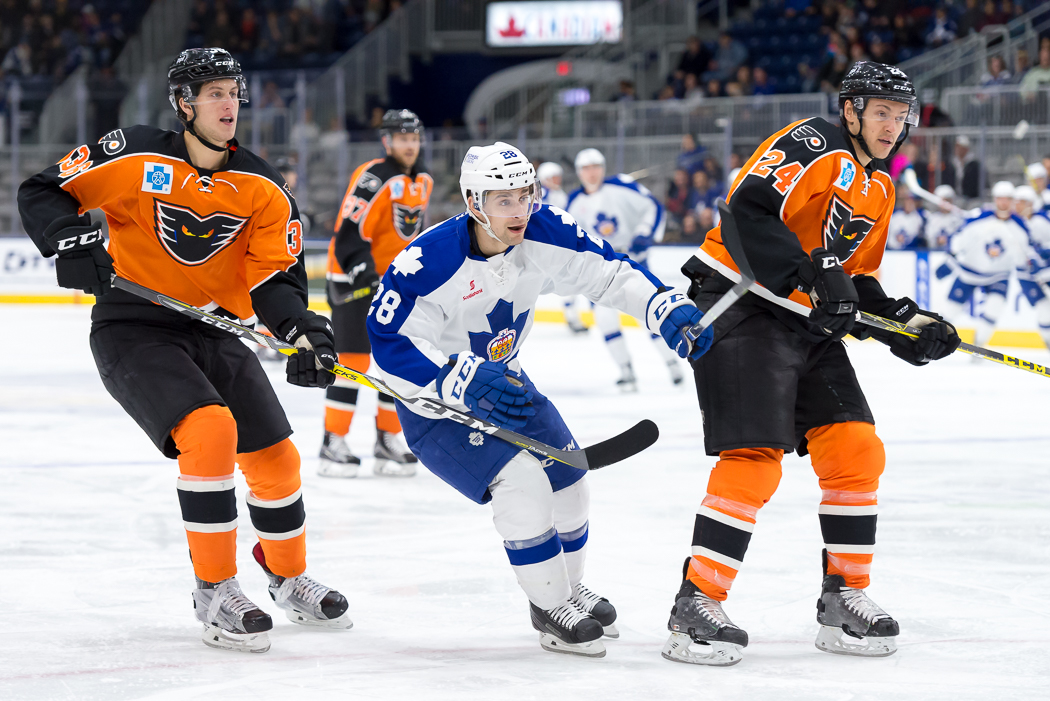 Toronto, ON – Anthony Stolarz had another spectacular performance between the pipes for the Lehigh Valley Phantoms who took the top team in the American Hockey League to a 2-2 draw through 60 regulation minutes. But ultimately the Toronto Marlies would prevail for the bonus standings point on Colin Smith’s game-winner in the extra session in a 3-2 decision at Ricoh Coliseum on Friday night. 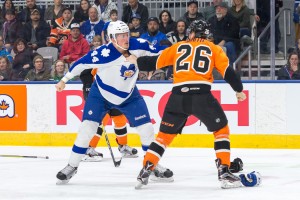 Lehigh Valley carried a 2-0 advantage into the final minutes of their five-game road-trip finale on goals by Tim Brent (6th) and Petr Straka (19th) while Stolarz held the highest scoring team in the league off the board through the first 54+ minutes of the contest. But goals by Sam Carrick (12th), Brendan Leipsic (18th) and then the game-winner from Colin Smith (18th) concluded the night’s scoring.

The overtime win almost went to the Phantoms’ side. Chris Conner, Taylor Leier and Adam Comrie all had close calls in the opening seconds of the overtime but newly acquired netminder Alex Stalock was able to barely reject their attempts as he hung on for his first win in a Marlies uniform for the former San Jose Sharks backup. 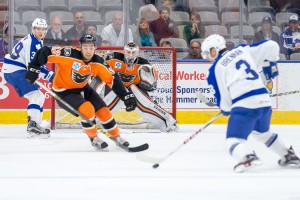 Both teams were tagged for penalties in the first period in which Stolarz was tested early to the tune of 10 first period denials in keeping the game scoreless.

The Phantoms converted on their next power-play opportunity early in the second period when former Toronto Marlie and Maple Leaf Tim Brent would chip upstairs the second rebound of Chris Conner’s close-range attempts. Brent’s sixth of the season was his first in over two months and his first since returning from 19 games on the sideline with an injury.

The former Toronto St. Michael’s Majors standout had over 60 friends and family on hand to cheer in person for his game-opening lamp-lighter. 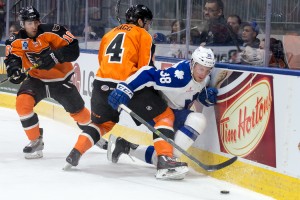 The Phantoms looked to be in control when Petr Straka’s breakaway goal after a fine feed through center by Aaron Palushaj staked the visitors to a 2-0 margin with just 5:54 remaining in the third. All of that hard work by Stolarz keeping the hosts out of the net appeared to be on the verge of paying off in an exciting road victory.

Another penalty called against the Phantoms would help enable the Marlies to the equalizer. The Phantoms had technically killed off the critical power play but Mark Alt had barely returned from the penalty box and had not even made it back to the Phantoms zone when Toronto’s Brendan Leipsic curled around to the right dot for a short-post low wrister just beneath the glove of Stolarz. 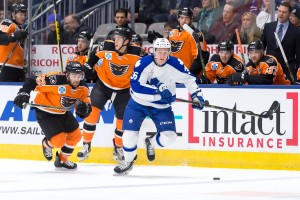 After Conner, Leier and Comrie almost scored a winner for Lehigh Valley, it would be Colin Skmith racing away for the Marlies up the left wing. Anthony Stolarz made one of his most spectacular saves of the night with the right toe to deny the former Colorado Avalanche farmhand. But just a few moments later it would be Smith again but this time from the top of the right circle to convert top shelf.

The Marlies victory was their 45th win of the year, most in the American Hockey League.

The Marlies out shot Lehigh Valley 37-25 in the game. Toronto was officially held to 1-for-7 on the power play while the Phantoms were 1-for-5.