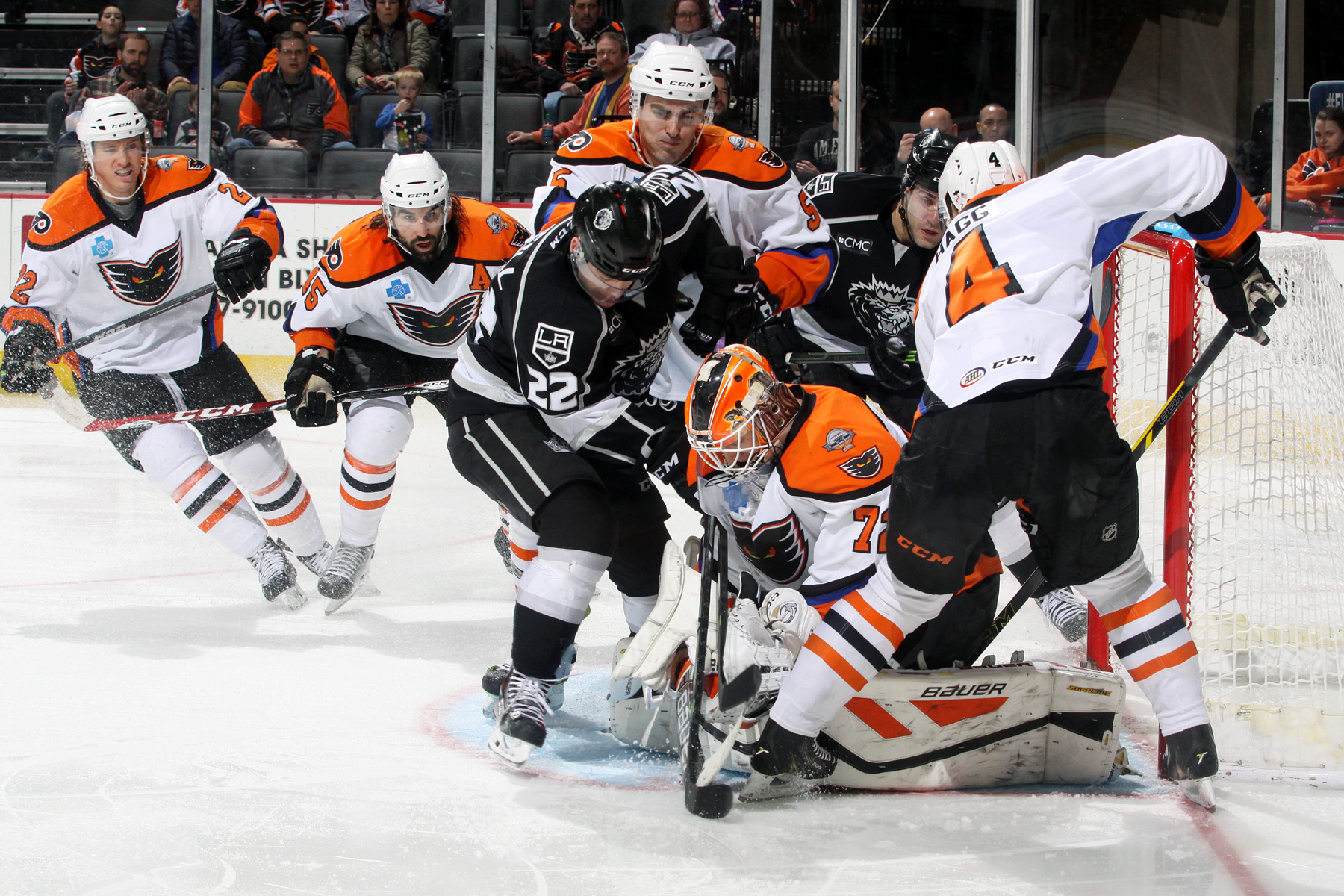 Lehigh Valley, PA – With yet another sellout contingent packing into PPL Center to back them, the Lehigh Valley Phantoms skated tooth-and-nail with the top team in the league on Sunday afternoon but eventually were felled in a 3-1 decision. The first-place Manchester Monarchs, affiliate of the Los Angeles Kings, were able to hold off the late Phantoms’ push at the end and then secure the decision in the waning moments with an empty-netter.

A crowd of 8,608 pushed the Phantoms total attendance mark on the year to over 277,000 in just 33 home games and provided the team with their 20th sellout of the season as well as their eighth sellout crowd in their last nine games. Area fans jammed PPL Center to the rafters all week long with a combined 34,585 fans filing into the new, spectacular downtown facility in the team’s four-game homestand for a stunningly impressive average of 8,646 during the stretch. 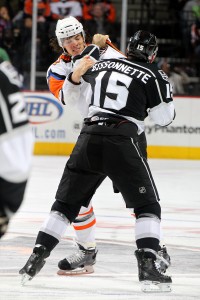 In the finale of the team’s four-game homestand, Scott Laughton (10th) scored his third goal of the weekend on a backhand beauty in the first period. Rob Zepp put forth a fine performance in net and mostly held off the hard-charging Monarchs’ attack particularly early while finishing with a total 30 saves on 32 shots faced.

Former Phoenix Coyotes enforcer Paul Bissonette led the way for the Monarchs with a Gordie Howe Hat Trick (goal, assist and fight) as the fourth-liner scored an AHL goal for the first time since 2008-09 when he skated for the Wilkes-Barre/Scranton Penguins. Former Philadelphia Phantoms tough guy Josh Gratton notched a pair of helpers and Ryan Horvat registered a goal and an assist. Manchester features the top two scores in the league in Brian O’Neill and Jordan Weal but the Phantoms were able to shut down those top guns. Instead it would be the fourth liners to guide the visitors to victory.

“That’s the best team in the league,” said Phantoms head coach Terry Murray. “That’s (several) years in the process of building a development program like that. That’s where it’s going to get to here. That’s what it’s all about. They’ve got a good team and they’re first in the league for a reason.”

While the Monarchs showed why they’re the best team in the league, perhaps they also helped bring out the best in the Lehigh Valley Phantoms players who displayed an intense and gritty performance in their efforts to slow-down the high-flying Manchester skaters. Sometimes pinned in their own zone, the Phantoms fought hard and continued to provide strong challenges to the Monarchs. They also fought with the fists as well as Oliver Lauridsen dropped the gloves with Paul Bissonette in a battle of heavyweights and then later Steven Delisle connected on several lefts in a row to quickly drop Manchester’s Kevin Raine to fire up the home team as well as the crowd.

Manchester got off to a flying start in the matinee affair and peppered away on Rob Zepp with a number of tricky drives thus engaging the Phantoms veteran netminder early. After the Monarchs had built a 9-1 shots advantage it would be rookie Scott Laughton to lift a backhand beauty across to the far post from the left of the cage for a stellar sharp-angle goal. Laughton’s third of the weekend gave the Phantoms a 1-0 lead midway through the first period with assists going for Jason Akeson and Oliver Lauridsen.

“That’s a great goal,” Murray said of the impressive lamplighter from the Flyers’ first-round selection in 2012. “That’s a strong play. That’s a real pro taking it to the net, backhand, top corner. I mean, you can’t get any better than that. It’s a highlight reel goal.” 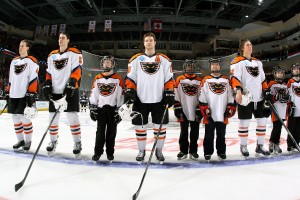 Paul Bissonette put a backhand deflection on a point-shot by Ryan Horvat to beat Zepp past his right skate evening the score at 1-1 at the first break.

Manchester came out even stronger in the second period while the Phantoms and Rob Zepp were doing their best to hang on. Eventually, Ryan Horvat snapped one through from the right circle midway through the second period to put the Monarchs up 2-1.

After being out shot in the first two periods by a combined 25-8, the Phantoms would put the pedal to the metal in the third period and ratchet up the attack. It almost worked. Lehigh Valley had several close calls in the third period in a 12-shot barrage against goaltender Patrik Bartosak. Andrew Gordon and Taylor Leier had big opportunities in front. Petr Straka and Adam Comrie offered quality drives from outside that narrowly missed sneaking in. In the end, Manchester rookie Michael Mersch would cap a five-goal weekend for him with an empty-net strike from the red line with 29 seconds remaining to clinch the Monarchs’ victory and avenge Lehigh Valley’s 3-2 triumph back in New Hampshire on November 7.

“I thought we played good for most of the game tonight,” Jason Akeson said of his team’s valiant performance against the top team in the circuit. “We had a couple of breakdowns but we stayed in it and we had a chance to win the whole time.” 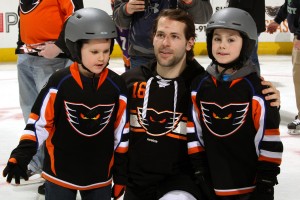 Hundreds of Phantoms fans came prepared for the team’s postgame open-skate opportunity with the entire team bringing their skates to join their favorite players on the ice after the game. The players combined to pose for hundreds of photographs and sign even more autographs for the appreciative Phantoms followers.

Before the game, a long line stretched deep around the concourse for the opportunity to meet former goalie Brian Boucher on another great Legends promotion. The former Flyers goalie (among other teams) who now serves as a television analyst for the Phantoms on Service Electric 2 and also on Flyers telecasts began his pro career with the Philadelphia Phantoms in 1997-98 winning a Calder Cup.

“I never really thought of myself as a Legend,” Boucher said. “But I’m honored to be recognized by the Phantoms and to be a part of the Flyers and Phantoms family. It’s pretty cool.”

Manchester head coach Mike Stothers was a player and coach in the Flyers organization for 18 seasons. The first-round selection of the Flyers in 1980 was the first-ever assistant coach for the Philadelphia Phantoms serving underneath head coach Bill Barber for four seasons from 1996-2000. Both would then join the Flyers coaching staff for two seasons as well.

“My relationship with Terry Murray goes back many many moons,” Stothers said. “I was drafted in 1980 and when I went to my first training camps with the Flyers, Terry was there and he was a mainstay with the Maine Mariners. It’s funny how it works. You look back at all those years ago and you go, Holy Smokes!” 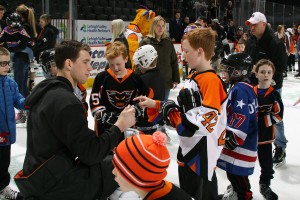 This was the last ever meeting between the Phantoms and Monarchs. Manchester is in their swan-song season in the AHL as the Los Angeles Kings organization will move their affiliate to Ontario, California next season. Manchester, New Hampshire will be represented by a new team in the ECHL next year.

The Monarchs out shot the Phantoms 33-20. Both teams were 0-for-2 on the power play. Lehigh Valley and Manchester ended up splitting the season series at 1-1. After 26 total meetings, the Phantoms all-time record against the Manchester Monarchs closes at 13-12-1.

The Phantoms return to action this Wednesday, April 1st when they kick off a three-game road swing with a visit to the Norfolk Scope for a showdown with the Admirals. Lehigh Valley is then in Binghamton on Friday, April 3rd for its regular season finale with the Senators before traveling to Wilkes-Barre/Scranton for a collision with the Penguins on Saturday, April 4th. Be sure to catch all the road action next week on Fox 1470 AM, online at fox1470.com or via the iHeartRadio app. Coverage begins with the Nazareth Pallet Countdown to Faceoff 45 minutes before puck drop.

The Phantoms then return to PPL Center to open a four-game homestand on Wednesday, April 8th when the Penguins return to downtown Allentown. Wednesday’s game is another $2 Beer Night with $2 Coors Light drafts available from the time doors open until the start of the 2nd period. The Phantoms also have upcoming home engagements on Friday and Saturday, April 10th and 11th with a weekend series against the Norfolk Admirals. Tickets for upcoming home games are available now at pplcenter.com, by calling 610-347-TIXX (8499) or in-person at the Mealey’s Furniture Box Office at PPL Center (701 Hamilton). 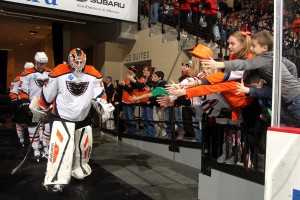