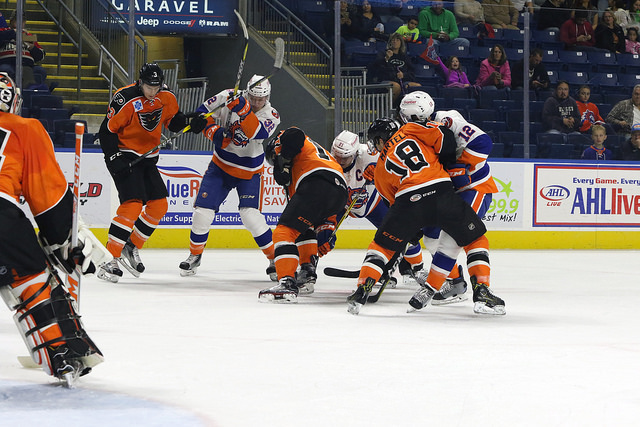 Bridgeport, CT – All good things must come to an end. And that’s what happened to the the longest Phantoms win streak in over a decade when Lehigh Valley fell at the Bridgeport Sound Tigers 5-2 on Saturday night. The Phantoms sustained their first loss in November while having their eight-game win streak snapped. 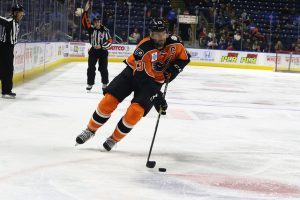 Lehigh Valley attempted their second dramatic multi-goal comeback in as many nights but were not able to pull it off again as Bridgeport barely hung on. Max Lamarche scored on the power play for the second time in as many nights and T.J. Brennan’s power-play blast early in the third period pulled the Phantoms to within 3-2 before Bridgeport was finally able to salt away the win with a pair of late goals in the final four minutes.

The game featured a handful of scrums and scraps as well as a fight between big youngsters Sam Morin and Ross Johnston in the decidedly feisty affair. 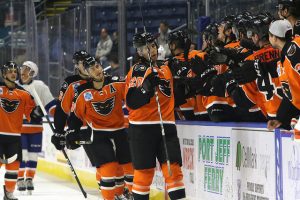 Max Lamarche staked the Phantoms to an early 1-0 advantage with his power-play conversion 8:53 into the game. The fourth-year pro hustled to the slot to receive a smooth drop from behind the net by Danick Martel. Lamarche blasted his second goal of the season off the right iron and in past McAdam It was also the second time this weekend Martel had set up Lamarche for a goal.

Bridgeport responded with almost five minutes left in the first period with Michael Dal Colle knocking in a spinning puck to the side of Lyon’s right skate following a pad save on a center-point drive from Devon Toews. Their own power-play goal had evened the score for the Sound Tigers at 1-1 before the first break.

The Phantoms received back-to-back power plays in the second period but Bridgeport was able to take advantage on a steal at the Sound Tigers line by 31-year-old veteran Steve Bernier. The former New Jersey Devil and San Jose Shark raced at Lyon on the shorthanded breakaway and succeeded top-shelf going over the glove of the Phantoms goalie to provide Bridgeport with its first lead of the night.

Less than six minutes later, Bernier would force a puck free behind the Phantoms goal and quickly find Josh Winquist in the slot who power his quick drive through Lyon before the netminder could react. For the second night in a row the Phantoms trailed by a 3-1 second at the second intermission. 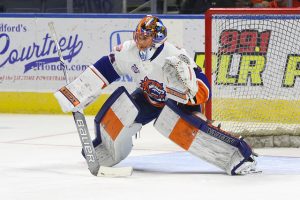 Lehigh Valley looked to put together the comeback magic again in the third period and T. J. Brennan’s blast from the right point through McAdam at 1:57 on the power play brought the deficit to 3-2. The Phantoms mounted some more threats from there around a couple of delays to repair various ice issues. But eventually the Sound Tigers were able to take advantage of the Phantoms desperation in the form of a Josh Ho-Sang breakaway on a backhander with 3:24 remaining for a 4-2 lead.

Just 64 seconds after that was Devon Toews finding a puck in the corner and then Josh Winquist smacking a mid-air drive with his stick from the blue line all the way down to an empty for the 5-2 final score. T.J. Brennan expressed his frustration and argued with the referee receiving a misconduct penalty immediately after the empty-netter perhaps contending the puck was deflected by a high stick. 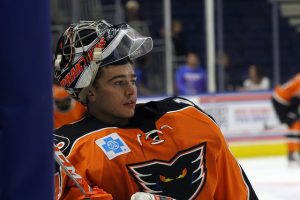 The Phantoms conclude their three-game road swing on Thanksgiving Eve with a Wednesday night sojourn to to the Binghamton Senators.