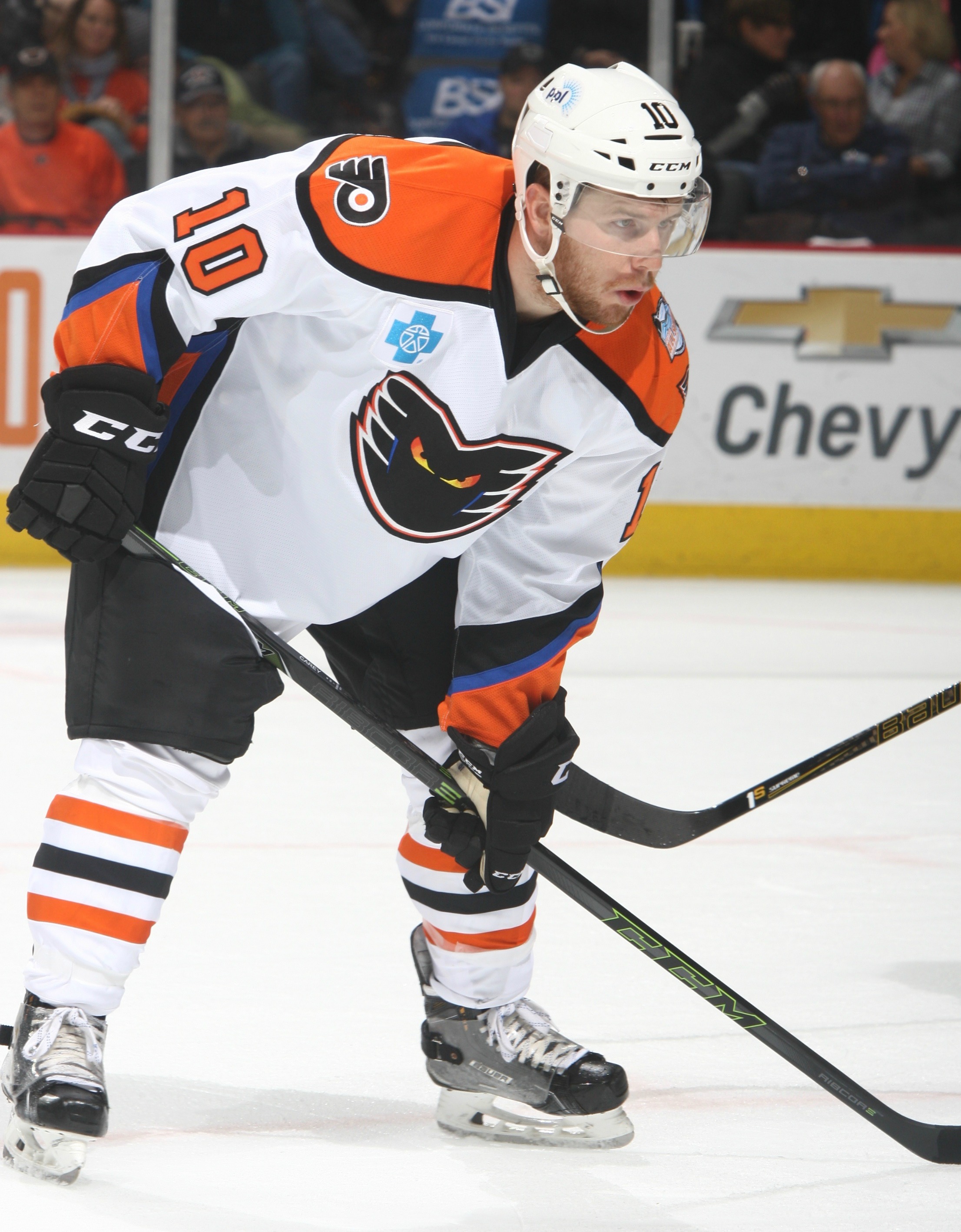 Providence, RI – The Lehigh Valley Phantoms had a flair for the dramatic in an incredible comeback win at the Providence Bruins on Friday night running the team’s win streak to eight. Greg Carey scored a pair of power-play goals in the final eight minutes forging a 3-3 tie thus providing the opportunity for Scott Laughton to bury the overtime winner.

Greg Carey took over sole possession of the AHL lead in goals scoring his ninth and tenth of the seasons. Both of his third-period strikes came on the power play as have a majority of his lamplighters on the whole season; Carey has eight goals coming during the man-advantage to also lead the league.

The Phantoms appeared to be on their way to their first loss in the month of November when they trailed 3-1 while time was ticking away. But the team rallied from a two-goal deficit in the third period for the second time on the win streak in the heartstopping finish. Lehigh Valley had trailed 4-2 against Springfield on November 5 but similarly rallied in the third period for a 6-4 win in that one.

The eight-game win streak is the longest for the Phantoms in over a decade and the third-longest in franchise history. The Philadelphia Phantoms won 17 games in a row in 2004-05 in a season that culminated with a Calder Cup Championship. And the Phantoms won nine straight early in the 1997-98 season in a campaign that also concluded with the team hoisting the Calder Cup.

Providence struck for a pair of power play goals early in the contest for a 2-0 lead before the first promotional timeout. Tommy Cross from the right dot at 3:57 and Wayne Simpson on a wrap-around at 6:49 provided the hosts with the early advantage.

Max Lamarche scored on the power play late in the period on a fine give from the opposite corner by Danick Martel. The fourth year pro scored just his second-ever goal in the American Hockey League with a blast from the left circle through Bruins netminder Malcolm Subban at 18:02 of the first.

Providence again stretched their cushion to a pair just past the midway point of the match when Colby Cave was first to a free puck in the crease after some quick transition on the rush following a defensive-zone faceoff win by the Bruins.

The Phantoms and goaltender Alex Lyon were faced with a critical 5-on-3 penalty kill for over a minute late in the second period but were able to scramble their way through and stay within a couple to preserve their comeback chances.

Lehigh Valley cranked up their comeback efforts in the third with a potent 18-shot barrage on Malcolm Subban. But the deficit was still at 3-1 when Providence would get tagged for a couple of key penalties in the concluding minutes of the game. Martel and Chris Conner had Subban handcuffed and scrambling after a series of passes and shots that allowed Carey to get his nose dirty and dive into the crease for the first goal of the comeback at 12:36 into the third period.

On the next power play with 4:24 remaining, Carey accepted a lead pass from Will O’Neill and did all the rest himself. Somehow hanging onto the puck and powering through a pair of Providence defenders flying up the right wing, Carey drove straight at Subban and ran his puck right through the pads for the equalizer with just 2:33 to go.

The 3-on-3 overtime session saw a series of incredible opportunities and denials in only a couple minutes. Jordan Szwarz had a quality chip in the slot that Lyon was able to repel.

Chris Conner eventually knocked a puck free from his own line and found himself in the clear on a breakaway but his backhander was denied by Subban as was the rebound opportunity by trailer T. J. Brennan.

Providence later had secured possession in their zone but Taylor Leier alertly anticipated a cross-ice pass for a smart steal. His quick drop to Travis Sanheim appeared to set up the Phantoms rookie defenseman for a possible game-winning strike but instead of going for his first of the year, Sanheim neatly slid one over to an open Laughton on the right dot who sniped home the decisive tally.

The night marked the first overtime victory of the season for the Phantoms who improved their overall record to 10-3-1. Lehigh Valley went an incredible 3-for-4 on the power play. The Phantoms have scored 11 power-play goals on the win streak.

Alex Lyon won his fourth in a row with 33 saves. Lehigh Valley out shot the Providence Bruins 38-36.

Lehigh Valley is then back at PPL Center for a pair of games following the Thanksgiving holiday. First, on Friday, November 25, it’s the Go Birds Tailgate with Eagles legend, Ron Jaworski, along with the Eagles Cheerleaders, on hand to meet fans and sign autographs before the Phantoms’ 7:05 p.m. clash with the Binghamton Senators. That is followed by a rivalry showdown with the Hartford Wolf Pack at PPL Center on Saturday, November 26.