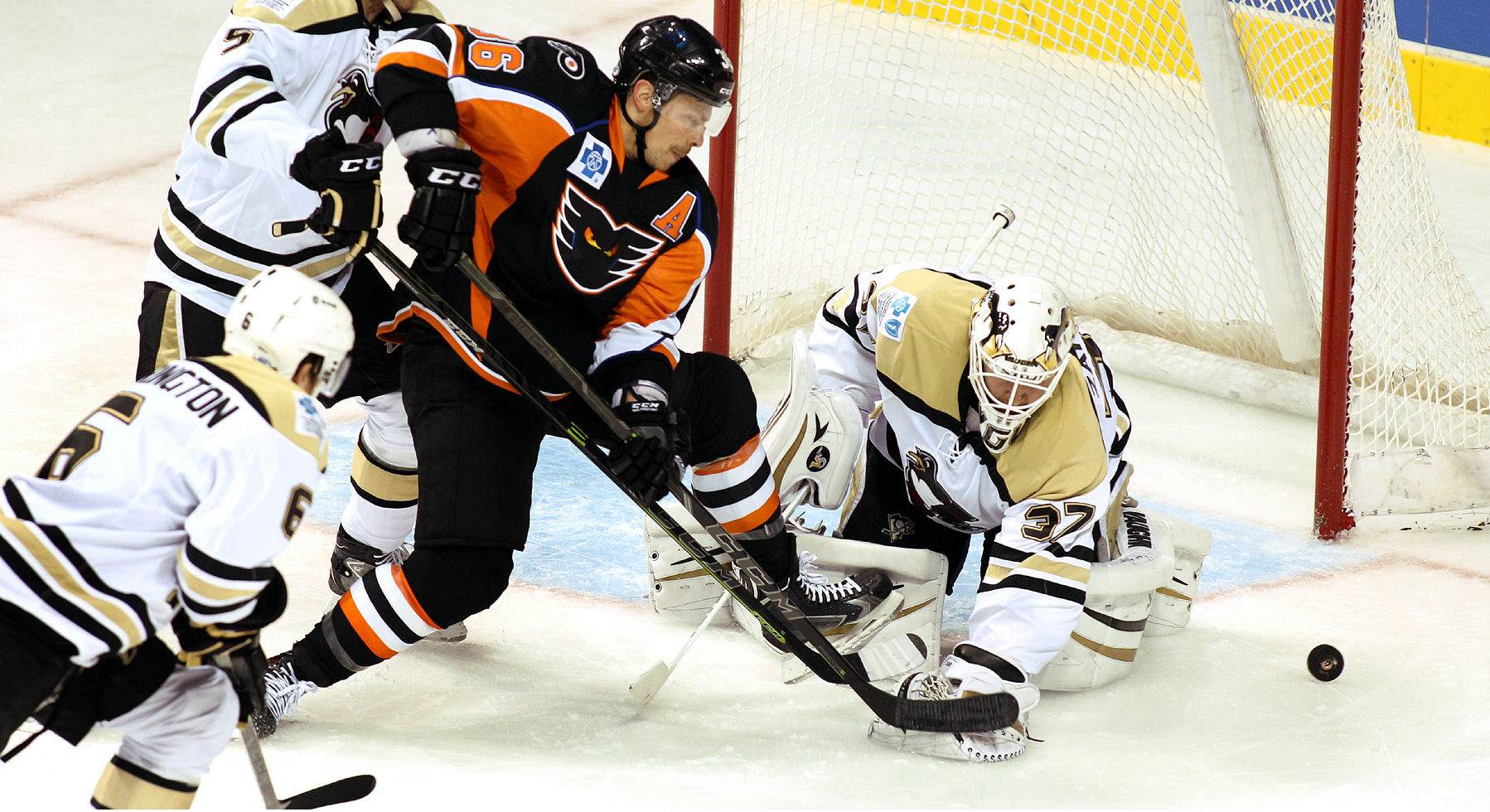 Brandon Manning Strikes in 3rd But Wilkes-Barre Breaks Away Late

Wilkes Barre, PA – Brandon Manning struck in the third period to pull the Phantoms back to even but the host Penguins battled back a few minutes later and then tacked on a late empty-netter en route to a 3-1 decision in a hard-fought and well-played game on Friday night up the road in Wilkes Barre.

The feisty game saw a total of 16 power plays evenly distributed for both sides with Lehigh Valley and Wilkes-Barre/Scranton both going 1-for-8 on their bevy of man-advantage opportunities. The contest was the finale of four consecutive on the road for the Phantoms.

Rob Zepp took the tough loss allowing two goals in a 20-save performance as the Phantoms record against the Keystone State rivals moved to 1-1-1 with still nine more games between the two teams remaining on the 2014-15 docket.

With a late 6-on-4 opportunity and later a 6-on-5, the Phantoms almost were able to dramatically tie the game. Rookie blueliner Jesper Pettersson on the top of the right circle found a free puck nudged his way and wound up in an attempt for his first career pro goal but Jeff Zatkoff made the save off his right arm and the rebound out to Nick Cousins on the other side was backhanded wide. Shortly thereafter, Dominik Uher closed out the scoring with his empty-net tally before the final horn had sounded.

Penguins rookie Scott Wilson converted in the first period during a 5-on-3 power-play off the rebound of a fine Zepp save for a 1-0 Wilkes-Barre advantage. Lehigh Valley was able to survive the opening 20 minutes despite allowing the Penguins four power-play opportunities. Steven Delisle saved another potential man-advantage goal late in the first period with his goal-line kick-stop on a drive that had gotten through Zepp.

The Phantoms mostly dominated play in the second period out-shooting the Penguins 9-4 and inducing several penalties for their own power-play chances. Lehigh Valley’s power-play created opportunities in the middle frame but were unable to break Zatkoff. Kevin Goumas perhaps came the closest after he picked up the rebound of a Robert Hagg slapper and was denied by Zatkoff sliding to his right making one of his best stops of the evening.

Finally, Brandon Manning’s power-play blast from the top of the left circle early in the third tied the score at 1-1 with Scott Laughton and Andrew Gordon receiving the nice assists.

It was Manning’s second goal of the season and his first since his dramatic overtime winner against the Adirondack Flames on Opening Night at PPL Center on October 17.

But rookie Bryan Rust for the Penguins would crank one off the crossbar and then eventually get to one of the rebounds during the ensuing scramble to score his team-leading seventh of the season. That would hold up as the game-winner at 8:06 of the third. Uher would secure matters with his later empty-netter with under five seconds left after the Penguins had barely hung on during the late Phantoms push.

Wilkes-Barre/Scranton out shot the Phantoms 23-22. Both teams were 1-for-8 on the power play in the infraction-packed affair.

This was the 129th all-time meeting between the Phantoms and the Penguins in a rivalry that dates back 16 years to the beginning of the Wilkes-Barre/Scranton franchise in 1999. Lehigh Valley next travels to Northeast Pennsylvania on December 5 for Round 4 out of 12 against the Penguins.

Of the 12 total games played by the Phantoms so far, two-thirds have been on the road. That trend will change beginning Saturday night with a home contest against the Toronto Marlies in the opener of a five-game homestand. It is also begins a run of six home games in two weeks for the Phantoms (against six different opponents) from Saturday, November 15 through Saturday, November 29.