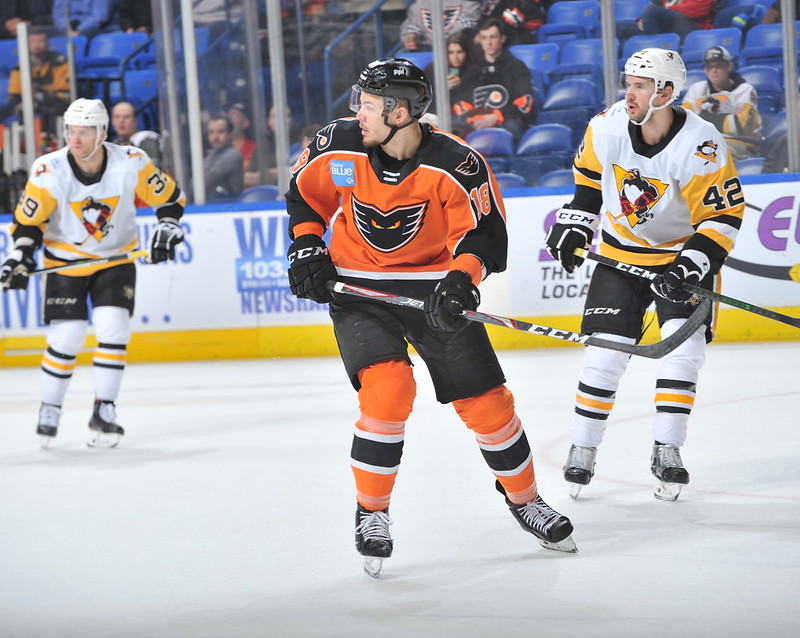 Wilkes-Barre, Pa. – The Lehigh Valley Phantoms pressured for yet another third-period comeback but the Wilkes-Barre/Scranton Penguins held off the late charge and then tacked on a couple tallies in the game’s closing minutes to pull away for a 6-2 win on Wednesday night at Mohegan Sun Arena.

Lehigh Valley (8-7-5) struck at the beginning of the game on a goal by Tyler Wotherspoon (1st) for a 1-0 lead and Pascal Laberge (2nd) scored early in the middle period to cut the deficit to 3-2. Wilkes-Barre/Scranton (12-6-2) received a pair of goals from Stefan Noesen who took over the league lead with 14 goals on the season. Thomas di Pauli scored an empty-netter with 3:10 left and then added a breakaway strike with just 45 seconds remaining to turn a 4-2 game into a 6-2 final result. 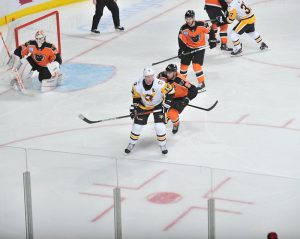 The Phantoms are 2-2-1 against the rival Penguins heading into the rematch between the two teams on Friday night at PPL Center which will be Round 6 out of 12 in the season series.

The Penguins benefited from a couple of penalty calls against the Phantoms to produce a pair of power-play goals in building a 4-2 lead. Joe Blandisi (3rd) rushed into the crease for a free puck after a shot by Andrew Agozzino speeding in appeared to hit Phantoms goalie Alex Lyon in the helmet. With his helmet jarred loose, the puck was still in play and Blandisi got there first to extend Wilkes-Barre’s lead to 4-2 on a critical play.

Misha Vorobyev had a nifty assist on Wotherspoon’s first goal of the season to open the scoringjust 1:22 in. The third-year Russian center picked off a weak pass in the Penguins zone and wheeled over to the left circle, dodged around a defenseman, and then connected with the Phantoms defenseman, Wotherspoon, who converted to the upper-left corner on the stick-side of Casey DeSmith. But the Penguins responded quickly with Noesen’s first goal of the night just over a minute later on a chip-in at the doorstep after some crisp passing on the power play with Adam Johnson and Andrew Agozzino.

Adam Johnson wheeled around behind the net to the left circle for a wide wrap-around style goal that he fired through Lyon at 13:55 for his first of the year and a 2-1 lead at the first intermission. 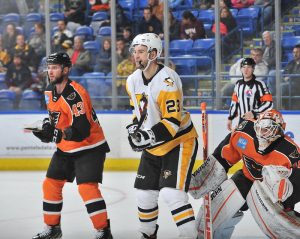 Noesen struck again in the opening minutes of the second period for a 3-1 lead when he rushed up the right wing and ripped a blast from the right dot off the edge of the glove of Lyon. The puck deflected upwards after catching the goalie’s trapper and then landed in the back of the net.

The goal for Laberge just over a minute later at 5:05 of the second period was a treat that cut the margin to 3-2. The Phantoms winger’s snipe from the high slot hit off the inside of the metal in the upper-left corner to then rattle around the top of the cage for his impressive conversion. The Flyers’ second-round selection in 2017 has two goals in four games since his return to Lehigh Valley after beginning the season with the Reading Royals in the ECHL.

Wilkes-Barre’s goal for Blandisi at 11:53 into the second period came with some amount of protest from Lyon with the conversion coming after his helmet had come off. But the puck was still in play and was free for the Penguins center to hustle to the crease to jab home the important tally.

Lehigh Valley applied some of its best pressure late in the second period but DeSmith and the Penguins somehow held on to their two-goal advantage.

Thomas di Pauli’s empty-netter with 3:10 to go and then his follow-up garbage-time breakaway concluded the evening’s scoring.

The night marked the first time this season the Phantoms sustained a regulation loss after scoring the game’s first goal. Lehigh Valley is now 5-1-2 when scoring first. 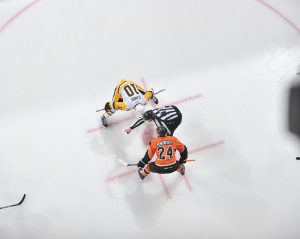 Lehigh Valley out shot the Penguins 32-31. The Phantoms were 0-for-3 on the power play while Wilkes-Barre/Scranton was 2-for-5.

The Lehigh Valley Phantoms will host a pair of games at PPL Center over Thanksgiving weekend including a rematch with the Penguins on Friday night and then welcoming the first-place Hartford Wolf Pack on Saturday night. The affiliate of the New York Rangers is led by head coach Kris Knoblauch who was previously an assistant coach for the Philadelphia Flyers under interim head coach Scott Gordon.